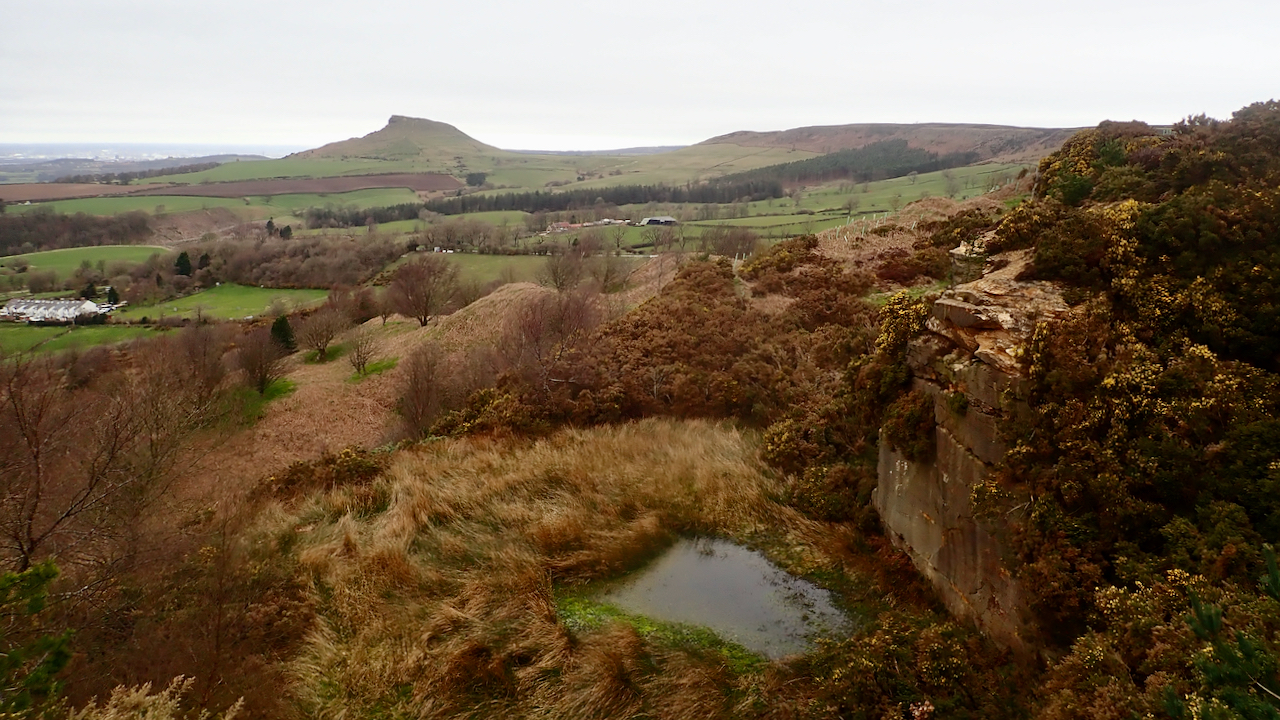 It must be at least a week since I’ve posted a photo of Roseberry Topping.

My inference, a few days ago, that the name ‘Roseberry’ was derived from a personal name (well, OK, the name of a god) was challenged. I thought it common knowledge, perhaps it needs an explanation.

It was put to me that the name came from the ancient British word ‘Ros’ meaning upland or moorland, or “hillock, usually one where heather grows”.

This was a view that was expressed by some early Georgian writers on the history of Cleveland, notably George Young1“Roseberry Topping”. Great Ayton Community Archaeology Project. ISBN 978-0-9554153-0-2 2006, and the Rev. George Stanley Faber2Faber. George Stanley. “The Origin of Pagan Idolatry Ascertained from Historical Testimony and Circumstantial Evidence…Three Volumes…” 1816. Google Books, 2013, books.google.co.uk/books/about/The_Origin_of_Pagan_Idolatry_Ascertained.html?id=mJSEJ2WzwMYC&redir_esc=y. Accessed 29 Mar. 2021..

But in plain English ros simply means a heathy hill, an elevated promontory, or, if Mr. Faber will have it so, “the mountain;” and bury, or burgh, is nothing more nor less than a fort on a high hill, “a military camp surrounded with a large trench;” and if any one will take the trouble to examine the higher part of Rosebury, he will find immediate and convincing proof to this day.

These views have long since been discredited. The Rev. Canon Atkinson, commenting in the later half of the 19th-century, was particularly scathing4“Roseberry Topping”. Great Ayton Community Archaeology Project. ISBN 978-0-9554153-0-2 2006:

I find myself totally unable to regard the derivation put forward in Mr. Ord’s quotation from Faber’s Origin of Pagan Idolatry as other than entirely fanciful, and entirely unsupported by any scrap of tangible evidence, while Mr. Graves’ etymological attempts in the matter can only excite a smile at their naive simplicity & unconscious self-contradiction.

Pretty damning. Atkinson went on to put forward his own view that the name Roseberry is derived from the Angle-Saxon ‘Hreosebeorh’ meaning the hill of the one who rages5“Roseberry Topping”. Great Ayton Community Archaeology Project. ISBN 978-0-9554153-0-2 2006. This view is also now discredited.

Roseberry was not recorded in Domesday Book, which is not surprising as all King William was concerned about was how much taxes he call demand of his land. The first mention we have is in a twelfth-century document as Othenesberg, from the Anglian beorg – the hill of 0thin. Othin, or Odin was the Scandinavian equivalent of the Anglo-Saxon god Woden6Morris, R.W. “Yorkshire through Place Names”. David & Charles. 1982. ISBN 0-7153-8230-6. This is the current accepted etymology of the name.

By the seventeenth century, the hill was recorded as Ounsbery, and the village of Newton as Newton-under-Ounsbery. Overtime the ‘r’ sound of the preposition ‘under’ became fused with Ounsbery to give us Roseberry7“Roseberry Topping”. Great Ayton Community Archaeology Project. ISBN 978-0-9554153-0-2 2006.

The second word of the name, Topping, derives from the Old Norse ‘toppinn’ for a hill top.