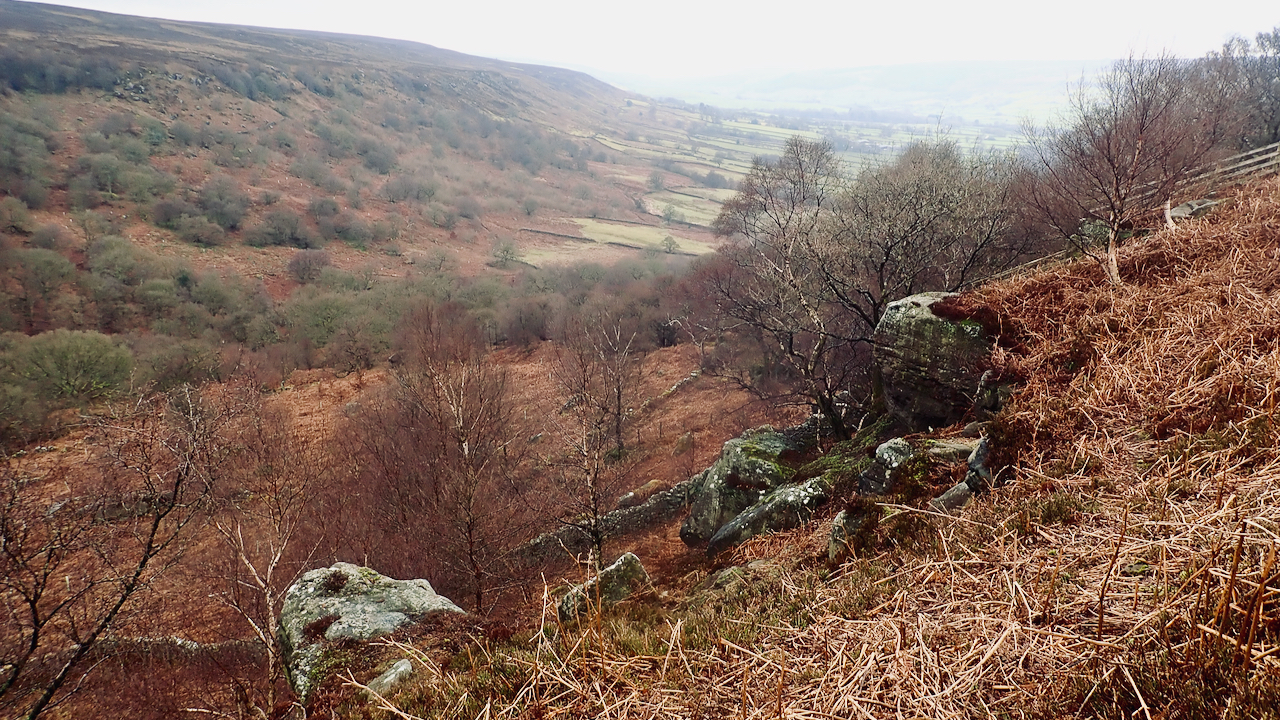 I’ve had my knuckles rapped. I recently received this email

Oh dear. He is right of course, the stone is not on Open Access Land nor is it on a Public Right of Way. It’s on a steep hillside of semi-open birch woodland covered with bracken and boulders. I happened to pass that way this morning, not daring to venture off the Open Access Land of course. Below me is Tarn Hole, a little side valley off Tripsdale in which the Buckingham Stone is located.

Moorland was classed as Open Access Land by The Countryside and Rights of Way Act 2000 (CROW) which gave us our limited “right to roam”. Woodlands were excluded. Yet the habitat distinction between the two is often vague even within a comparison of Tarn Hole with its neighbouring Tripsdale.

When England’s (and Wales’s) Right to Roam Act was enacted just over twenty years ago by the Labour Government, it was hailed at the time as a flagship of the public accessibility to the countryside. Yet our rights to roam are pathetic compared nothing to that of other countries. The citizens of many Northern European countries, Scotland, Finland, Iceland, Norway, Sweden, Estonia, Latvia, Austria, Czech Republic and Switzerland, enjoy ancient rights to access the countryside1Wikipedia Contributors. “Freedom to Roam.” Wikipedia, Wikimedia Foundation, 6 Mar. 2021, en.wikipedia.org/wiki/Freedom_to_roam#England_and_Wales. Accessed 7 Mar. 2021.. And the meagreness has been exasperated by the Covid pandemic when more and more of us are trying to exercise onto a limited network of Public Rights of Way or cram into a finite number of beauty spots.

Of course, in exercising any right to roam, the onus is on us, the people, to respect the land, others’ rights to manage that land, and to protect nature. Perhaps, therein lies the problem which is plaguing us with our limited right to roam. How can the public respect something which is given so grudgingly?

The counter argument to the right to roam is the right to property. “Gerroff moy land!”. Indeed it is only with the construct of property comes the need for a right to roam. For two and a half million years the earliest humans had no need for property bar perhaps squabbling over possession of an animal carcass or a ripe fruit tree. Ten thousand years ago, with the advent of agriculture, things changed. The Neolithic farmer needed to defend his crops and stock from animals, weeds and his neighbours. A good summer meant more food could be produced than his family needed, excess could be stored or traded for greenstone axes from Langdale or jewellery of jet from Whitby. He became lord of his valley. His property had increased to more than he could merely carry. The beginnings of civilisation. From there it is not such a big step to the control of vast empires and ownership of everything in them, including the most appalling of property, human slaves.

Property therefore could be argued to be one of the fundamental ‘evils’ in human society. Could we have evolved in any other way?

Notwithstanding that I do not consider myself to have been “encouraging people to commit trespass” and the accompanying narrative did not contain anything which had not already been published before, in the interests of harmonious relations, I have removed my previous photo of the Buckingham Stone from public view.  Yet I firmly believe, history should not be hidden. And it is already in the public domain as the hyperlinks attest. So I’ll do a cut and paste job:

The Bilsdale Fox Hunt purports to be the oldest in England, established in 1668 by the 2nd Duke of Buckingham, George Villiers. But Michael Heavisides, a frequent visitor to Bilsdale at the turn of the 19th century recounts that when first established, game no smaller than wild boar was hunted. No foxes. Heavisides was referring to an article in the North Star newspaper on the funeral of Bobbie Dawson who was a lifelong character of the Bilsdale Hunt.

Heavisides and others talk of a tradition in the dale when the Duke chased a particular fox for a gruelling three hours. Finally at a certain boulder in Tarn Hole, off Tripsdale, his horse collapsed and died. No one knows how the Duke felt about his poor horse. No doubt one of his lackeys brought him another one to ride home but the rock remained in the memories of Bilsdale folk, supposedly capping it with a smaller boulder. Some feat. There is an archived photo of the rock in the Helmsley Archive.

The Duke was a bit of a rake, a hellraiser. Some say the nursery rhyme

Georgie Porgie, Pudding and pie,
Kissed the girls and made them cry,
When the boys came out to play,
Georgie Porgie ran away.

was based on the Duke but others attribute it to his father, the first Duke, also a George. George junior fought for King Charles I in the English Civil War forfeiting his estates but had these returned in the Restoration. Under Charles II his life became a series of scandals. The year 1668, the year the Bilsdale Hunt was founded, started off with a duel with the Earl of Shrewsbury over his affair with the Countess of Shrewsbury. The Earl was fatally wounded after which the Countess moved in with the Duke and his wife, Mary.

The Duke died in 1687, having caught a chill while hunting. One version is that this chill was caught while waiting for his replacement horse at the rock. He left no legitimate heirs and the Dukedom became extinct with his estate eventually being brought by Charles Duncombe in 1694, a mere commoner. In 1826 Charles Slingsby Duncombe was made the 1st Baron Feversham.‌

4 Replies to “The Right to Roam”