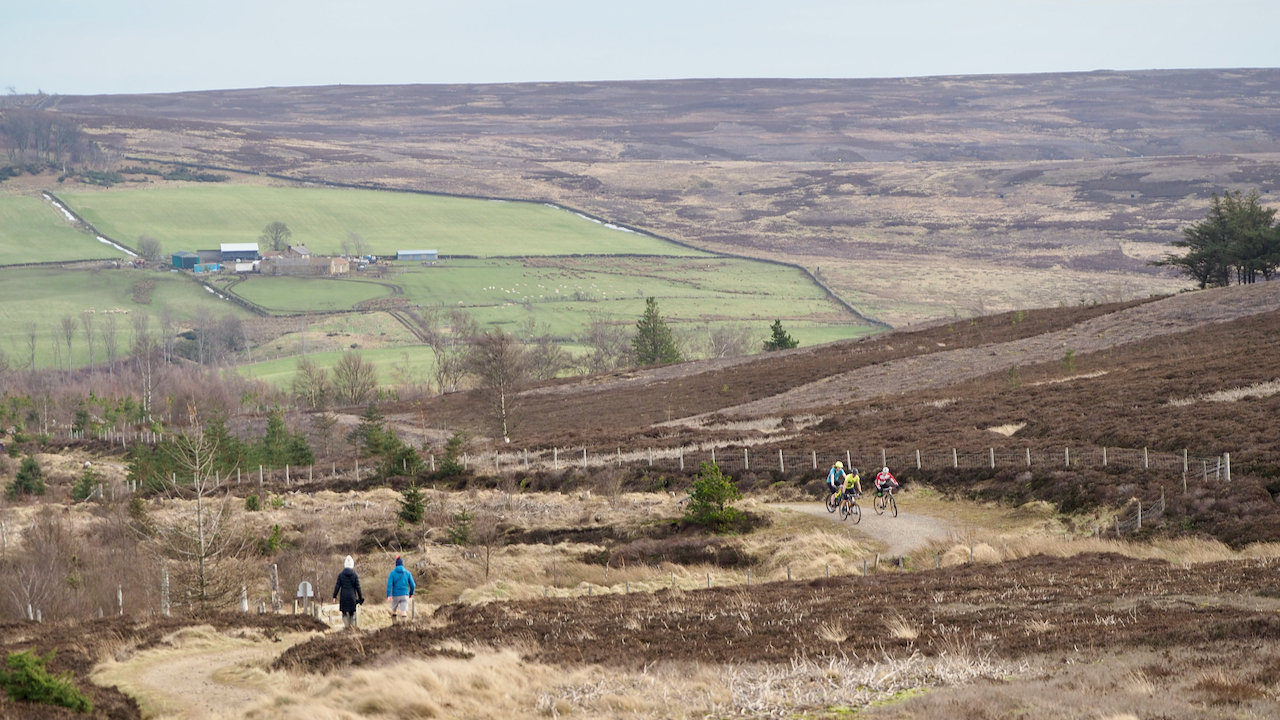 The cyclists and the walkers are on the Cleveland Way between Little Roseberry and the Kildale track. This is supposed to be the route of an ancient and important route called ‘Melegate‘. The name is mentioned in a 13th-century charter between Guisborough Priory, and Richard de Hoton and his brother, Humphrey, following a dispute over grazing and the cutting of peat and heather on the moor1“Charter Document – 01130327 | DEEDS.” Utoronto.ca, 2013, deeds.library.utoronto.ca/charters/01130327. Accessed 17 Feb. 2021..

This document, ‘Cartularium Prioratus de Gyseburne’, is available online although it is in Latin. However, good old Google provides a translation but it’s still hard to fully understand what’s going on.

What’s interesting to me is the place names.

Basically, it is agreed that Richard and Humphrey are allowed to cut turves/heather from the western side of  ‘the valley of Rivelingdale to Rotandekelde’ and then to ‘Melegate’ and then along ‘Melegate’ to ‘a small Utheneberg‘.

‘Rivelingdale’ is the wide boggy valley of Codhill Slack.

‘Rotandekelde’ means the red spring and is supposed to be in Rivelingdale2Guisborough Before 1900″. Edited by B.J.D. Harrison and G. Dixon. ISBN 0 9507827 0 X 1982. There are several candidates although I suspect it may be St. Mary’s Well.

‘A small Utheneberg‘ is of course Little Roseberry, although it is generally assumed here to be mean at the col on Roseberry Common, where the various tracks met.

The Charter goes on to say the brothers are allowed to graze cattle ‘as Rechergate extends to Thruhkelde and then just Riggingate down at the ford of Rivelindale and from there the path leads to Percycros and then just Molecros leads at small Otheneberg and then the path that stretched over wood from Hotona to Rechergate mentioned’.

‘Thruhkelde’ is the ‘spring on the pass’ near Codhill Farm4“Guisborough Before 1900”. Edited by B.J.D. Harrison and G. Dixon. ISBN 0 9507827 0 X 1982, possibly Codhill Spring which was near the moor gate below Highcliff Nab. It no longer flows. In the photo it is at the edge of the copse, far left hand corner.

‘Riggingate’, I imagine this was a track that ran over Codhill Heights.

‘The ford of Rivelindale’, I just envisage this to be where the modern access road to Sleddale Farm crosses Codhill Slack.

Which leaves ‘Molecros’. This is thought to have been located near the Kildale road leaves the modern forest boundary, at the point where ‘Melegate‘ joins.