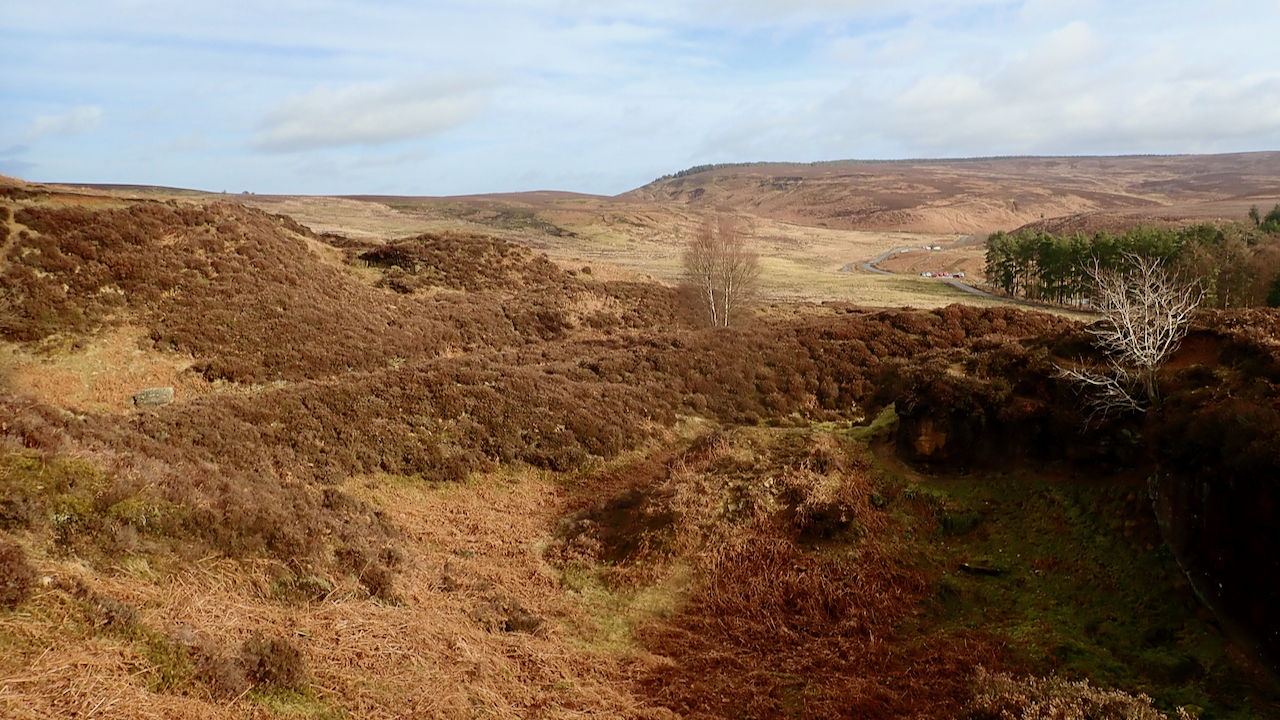 On my way to Northallerton to get jabbed, so popped over into Cod Beck on the way. This is a view of Scarth Nick and Sheep Wash from Priest’s Spa Quarry on Hither Moor.

And it’s Pancake Day too, a day when many traditions have been lost to history. Shrove Tuesday, the day before the start of Lent and a last chance to use up all thse eggs, flour and butter not needed during the 40 days of fasting leading up to Easter. A Pancake bell, rung before noon on Shrove Tuesday, summoned all good Christians to confession to be absolved of their sins or “shriven”, but came to be looked upon as the cue for preparing the day’s pancakes.

Many towns and villages had their own customs. In Stokesley, the schoolmaster would play along with some pretext to go outside, where upon the children would bar him from re-entering chanting1Darlington & Stockton Times 2 March 1927:

“A holiday, a holiday we crave.
A holiday a holiday we’ll have ;
If you don’t give us holiday there you must stay.
For this is our legal barring-out day.”

One Northern tradition that is best forgotten is the Cock-penny whereby a schoolmaster, often paid a pittance, might anticipate for a small fee by presiding over the ‘Cock-throwing’ in his playground, the barbarous pastime of cock-fighting. Once that became obsolete, Leadbirds was devised by the boys as a substitute.

I guess this year Covid restrictions will have put paid to many customs that have somehow survived. Great Ayton had its pancake races and there are many boisterous mob football matches, such as at Alnwick in Northumberland, Ashbourne in Derbyshire, Atherstone in Warwickshire, Sedgefield, and St Columb Major in Cornwall.

Other ball-games played at Shrovetide include bung-ball, and kep-ball, a game of catch-ball hence the name of Kepping-day for Shrove Tuesday. There is an old East Yorks. saying: ‘if you don’t have a kepp on kepping-day, you’ll be sick in harvest’.

In Ludlow, there was an ancient custom of rope-pulling which was observed on Shrove Tuesday. At about four o’clock in the afternoon, a rope was given out from the window of the Town-hall by the Mayor. Immediately on the rope being let down from a window, a tug o’ war begins between the inhabitants of the different wards of the town. “There are afterwards ordinaries at the various inns, and pleasure and conviviality are the order of the day”.

Another popular Shrovetide sport was Lent-crocking, or Drowin’ o’ cloam, which consists in throwing broken crockery at doorways. This was usually done on the night before Shrove Tuesday, known as Dappy-door-night, and Lentsherd-night.