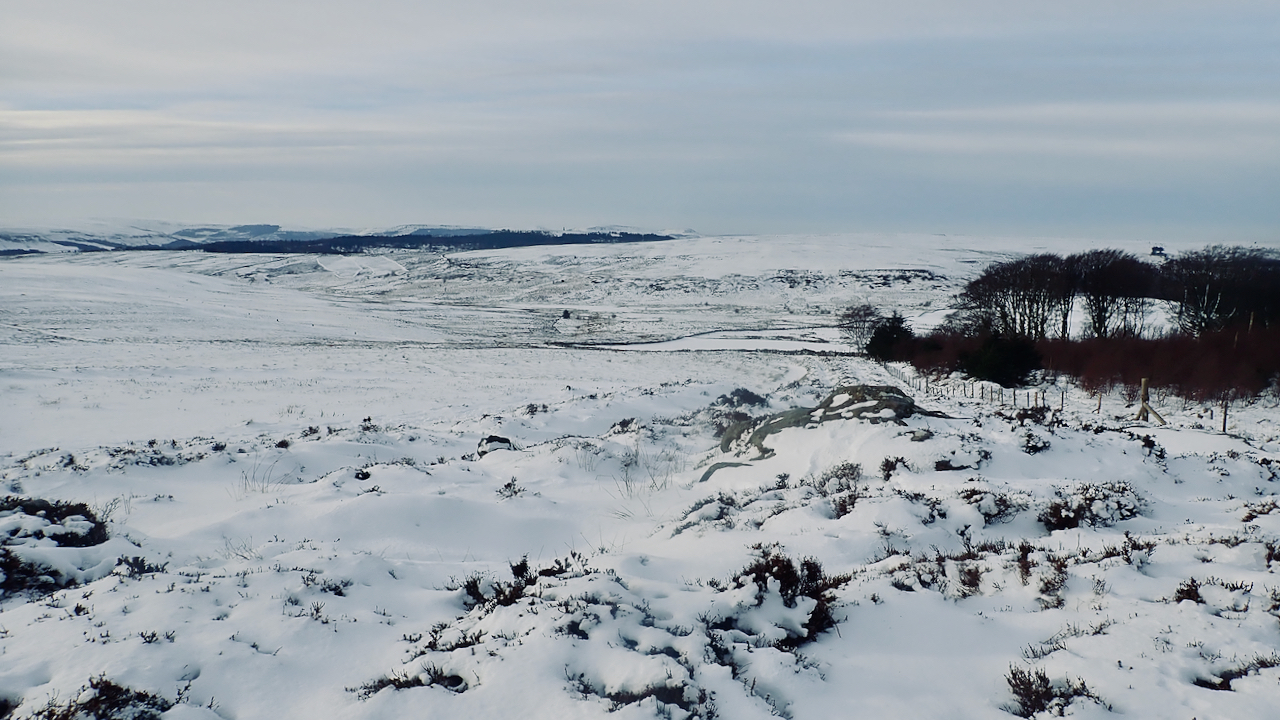 The image belies the buffeting I was getting by the bitter wind. I was on Potters Ridge, a small 24m high prominence of Guisborough Moor. Highcliff Nab is at the north-western end, and views of Sleddale and Rivelingdale on the southern, the ridge bisected by the forestry boundary fence.

I am currently reading ‘Sapiens’ by Yuval Noah Harari, a history of how Homo sapiens came to rule the world. It’s a fascinating read so far, I’m up to Chapter 5, the agricultural revolution, so that was at the front of my mind as I climbed Highcliff Nab this morning.

In the 1990s, Highcliff Nab was the scene of an archaeological excavation prior the laying of a stone footpath up it to cope with the popularity of the Cleveland Way. The excavation turned up several thousand flints, blades and microliths, along with burnt stone and charcoal, all evidence of an early Mesolithic encampment. There were also significant concentrations of burnt stone and charcoal. However, noticeably absent were tools such as scrapers which suggests that this was a temporary seasonal camp, used by hunting parties perhaps making use of the commanding views from the nab.

One of the things that Harari considers is how did Homo sapiens rapidly spill out of Africa into Europe and Asia,  and eventually the Americas and Australasia, to dominate the animal kingdom including other human species such Homo neanderthalensis. He puts it down to a cognitive revolution, an evolution of our mental capacity which meant sapiens were able to imagine, plan ahead, and be creative. They could communicate these ideas and work together for a common aim. This gave the species the ability to rapidly adapt to changes in circumstances and environment. The rest of the animal kingdom, on the other hand, had to endue slow evolution by natural selection.

But all that began in Africa, 70,000 years ago. Their descendants, our hunter gatherers who camped at Highcliff, were there sometime between 8,600 and 9,600 years ago. Although Britain had by then become warmer after the last ice age, but it was still cold with a tundra-like landscape of grasslands with pockets of open forest consisting of birch and the nut-bearing hazel. These grasslands and forests were the habitat for bears, wolves, and herds of red deer and wild horses as well as a number of now extinct large animals such as aurochs (wild cattle), megaceros (giant deer), and elk.

The Mesolithic peoples would have followed the rhythms of the seasons. Our group may well have annually moved north to the Tees estuary to take advantage of some abundance along the coast.  At this time, Britain was still connected to the Europe mainland by a land bridge, Doggerland. It is reckoned around 6,200 BC, a submarine landslide off the coast of Norway caused a tsunami, crashing into the east coast and severing us from Europe for good.  Our group not have been camped up here at Highcliff at the time, but I imagine they are here, watching and hearing the calamity play out.  It would have been terrifying.