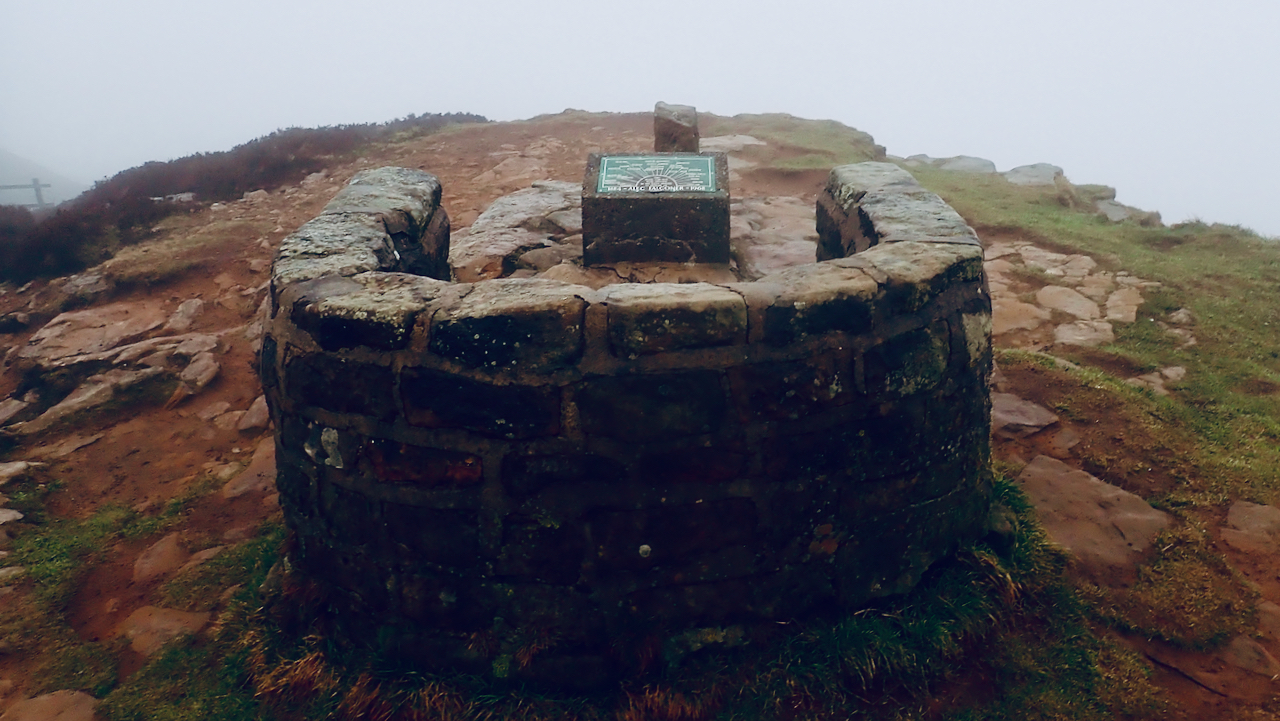 Not much to see today above the 300m contour. This is the Alec Falconer memorial seat on Cringle Moor.

Alec Falconer was a founder member in 1912  of the “Middlesbrough and District Countrywide Holidays Association and Holiday Fellowship Rambling Club” which went on to become known as the Middlesbrough Rambling Club. He was also an active campaigner for the rights of walkers under the pseudonym of “The Rambler” and was instrumental in the creation of the long distance trail the Cleveland Way which traverses Cringle Moor. He died a year before the trail was officially opened in 1969.

The Cleveland Hills is a familiar sight on the drive home across the A66 over Stainmore but making out the detail looking west is difficult.

On a clearer day, Easby Hill, with its monument to Capt. James Cook, should be visible.

Cook has made the news again. The Daily Mail has run an article saying that “Statues of Captain James Cook are in the crosshairs of Black Lives Matter activists“. The Daily Telegraph also picked up on the story but that’s behind a paywall so I haven’t read it.

The story was seized upon by a local MP who has created a petition supposedly to protect the statues from “harm or removal“.

Unfortunately, the MP seems to have accepted the story at face value without doing some basic fact checking to verify it.

The Mail article erroneously associates an interactive map (to which anybody can add) issued by Topple the Racists organisation with the Black Lives Matter movement.

Both are completely separate organisations although the Topple the Racists does say on their website that the “map is a Stop Trump Coalition project in support of the Black Lives Matter movement”.

Black Lives Matter is a human rights movement highlighting and campaigning against violence and systemic racism towards black people. It has nothing to do with the BLM USA neither is it associated with the ‘Black Liberation Movement UK’.

I can not find anywhere where Black Lives Matter has advocated the removal of statues. This is a complete fiction dreamed up by those wanting to stoke up anti-racist sentiments.

The Stop Trump Coalition is a limited company which seems to have evaporated into just one person with a website presumably after the end of Trump’s presidency. So in all probability Topple the Racists is a one man outfit too.

I am disappointed that a holder of public office should be actively encouraging the spread of this divisive disinformation.