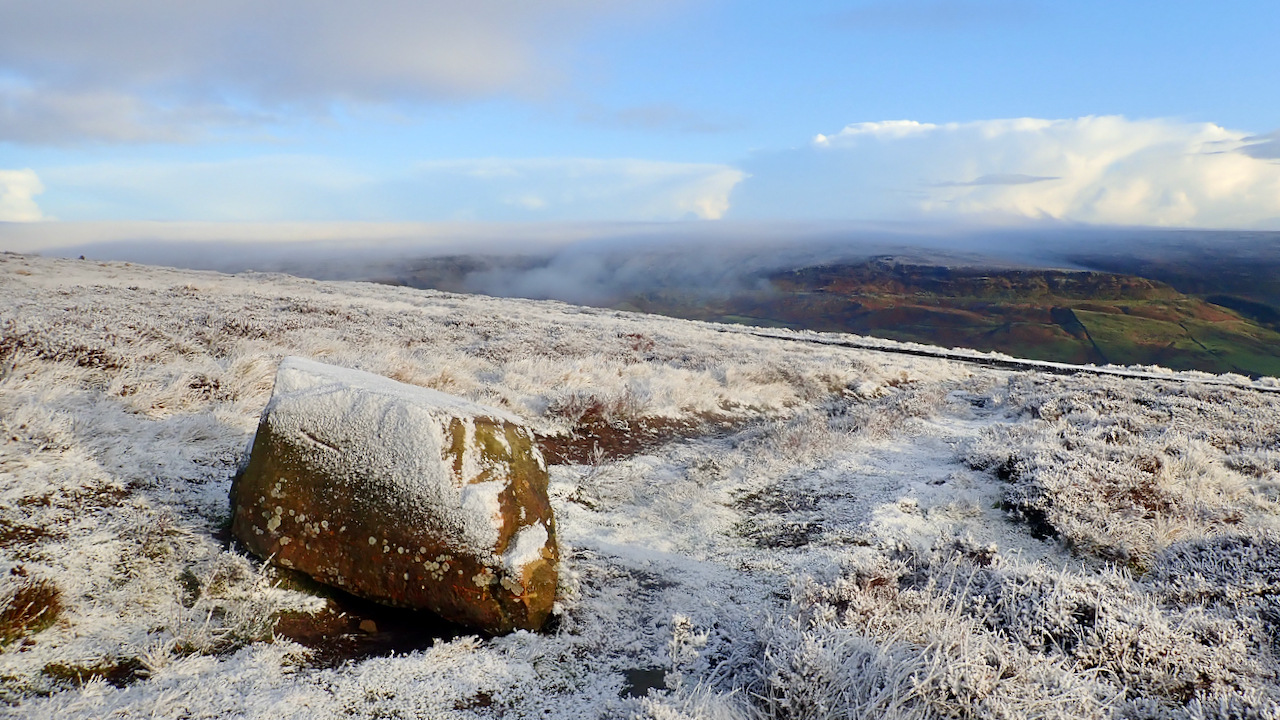 Headed high today. To Blakey Ridge. Through the freezing fog to blue skies and a boreal wonderland.

We were in search of the remains of a temporary encampment for the navvies that built the mineral railway around Rosedale. The location was at Black Intake just west of Green Head Brow.

The first loaded train along the 14-mile mineral railway from Battersby to the ironstone mines on the west side of Rosedale ran in 1861. Three years later work began on a 5-mile extension from Blakey crossing around the head of the dale to the mines on the east side. It was completed in 1865 taking just eighteen months.

The work was completed by an army of itinerant navvies or labourers who lived close to the job in temporary camps. One of these was located on a south-west-facing slope between Castle Crag and Green Head Brow. It was first identified and surveyed by members of the Scarborough and District Archaeology Society in 1974 (1979 Research Report No. 9). In 2019 the site was resurveyed.

The site consists of the turf-built foundations of seven buildings, six measuring 28 by 5 m and the seventh 12 by 5 m. It is thought the larger huts would have been occupied by a gangmaster and his family in one-half with the gang in the other. The gangmaster’s wife would cook and clean for the men.

However, as the camp was only occupied between censuses, records of the navvies are scant.

Some Lidar information is publically available but only at one-metre resolution. The end and central walls of each building can clearly be seen as three ‘knolls’ in a line. On the ground, it is the back walls that are more pronounced.

One of the tasks the navvies probably would not have performed would be the construction of the many culverts through the railway embankments for the moorland streams. These are well constructed of dressed sandstone blocks but were they cut on-site by skilled stonemasons or brought in from further down the dale?

The navvies’ main work would be digging the cuttings and transporting the spoil to fill the embankments. All by hand. What a hard life.

2 Replies to “In search of a navvy camp in Rosedale”