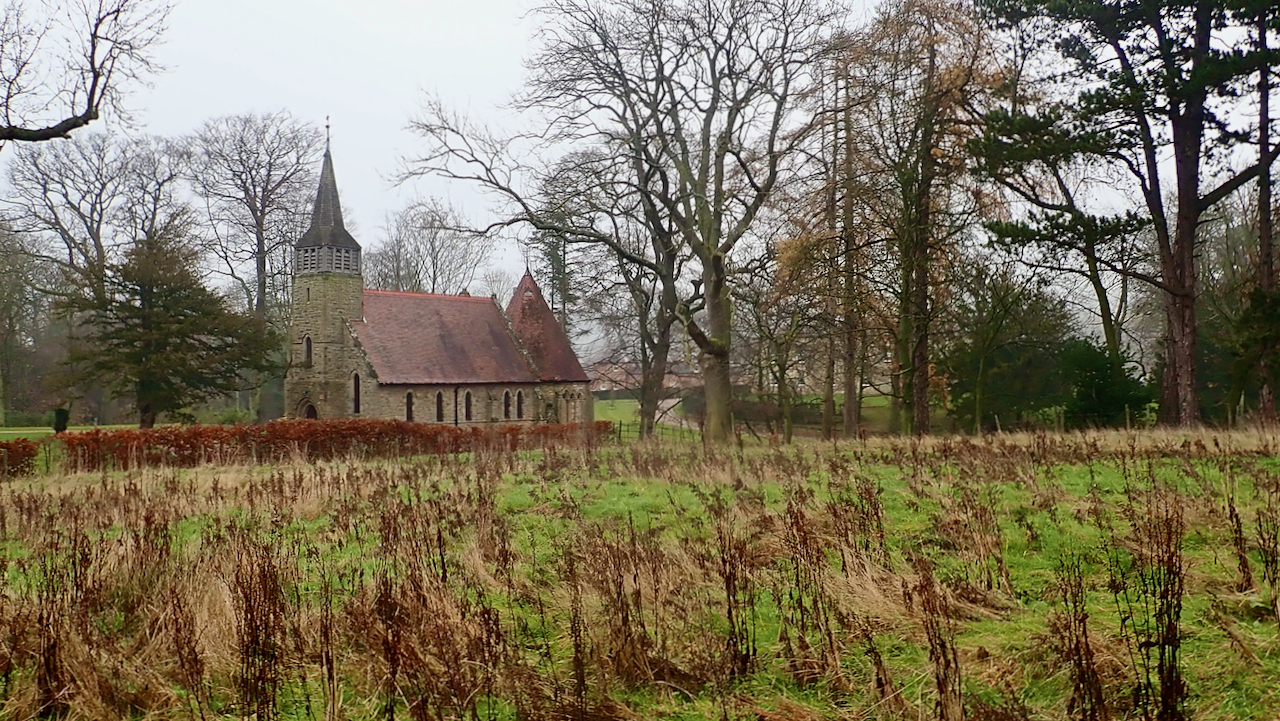 With a blanket of fog covering the northern North York Moors, today wasn’t a good day for photogenic splendour. So my thoughts turned to the lowlands.

I listened last week to a lecture by a University of York professor into medieval church records who revealed that at least eleven plague cemeteries were licensed in 1349 in Yorkshire. One of these was at the chapel-at-ease at Easby.

1349 was one of those years when the country was devastated by an epidemic of the plague, believed to be bubonic plague or the ‘Black Death’. The death rate was so high it wasn’t expedient to transport victims to the parish church at Stokesley.

My curiosity was piqued. Where was this cemetery? I knew from the 1853 Ordnance Survey map that Easby had a chapel-at-ease, but it had been rebuilt in 1882 as a private chapel of the Emmerson family. In 2010, it was possible to walk up to the chapel but since then locked gates deny any access, so I had to resort to peering over a hedge.

Pevsner, in his euphuistic style, describes the chapel as “consisting of a nave bell turret crowned by a spikelet and lancet windows” and to the rear a “polygonal mausoleum with octagonal pyramid roof”.

Although nowadays Easby is such a quiet village, its medieval population must have been significant to warrant an extra cemetery. It’s a village of two parts, Low Easby is the larger community that would have been clustered around the mill, although the ‘Low’ pre-fix is relatively modern. Easby itself is a small hamlet but still with a methodist chapel.

Easby is one of the few villages which is easily recognisable in the Domesday Book – ‘Esebi’, which was held by the King. Later, it was split into two manors. One part was granted to Guy de Balliol along with Stokesley. In the 12th-century, this family is attributed as building the motte castle on Castle Hill which dominated the surrounding countryside.

All this is a roundabout way of introducing a story of murder. The other manor was attached to the manor of Tanton and held by the Mowbray family. There seems to have been a family feud between the Mowbrays and the Meynells, another prominent family, who held Whorlton Castle.

In 1293 Nicholas de Meynell was accused of murdering William de Mowbray, along with his wife and his children, Richard and Hilda, by setting fire to their house in Easby. He escaped justice by claiming trial in the court of the Archbishop of York. Tom Scott Burns, whom I have mentioned before and is my current read, recounts that during the reign of Edward I (1272-1307), six men were burnt to death in a house in Low Easby. This is too much of a coincidence and I think they refer to the same incident but Burns’ version is a little distorted.

Two tragic stories in the history of a village.