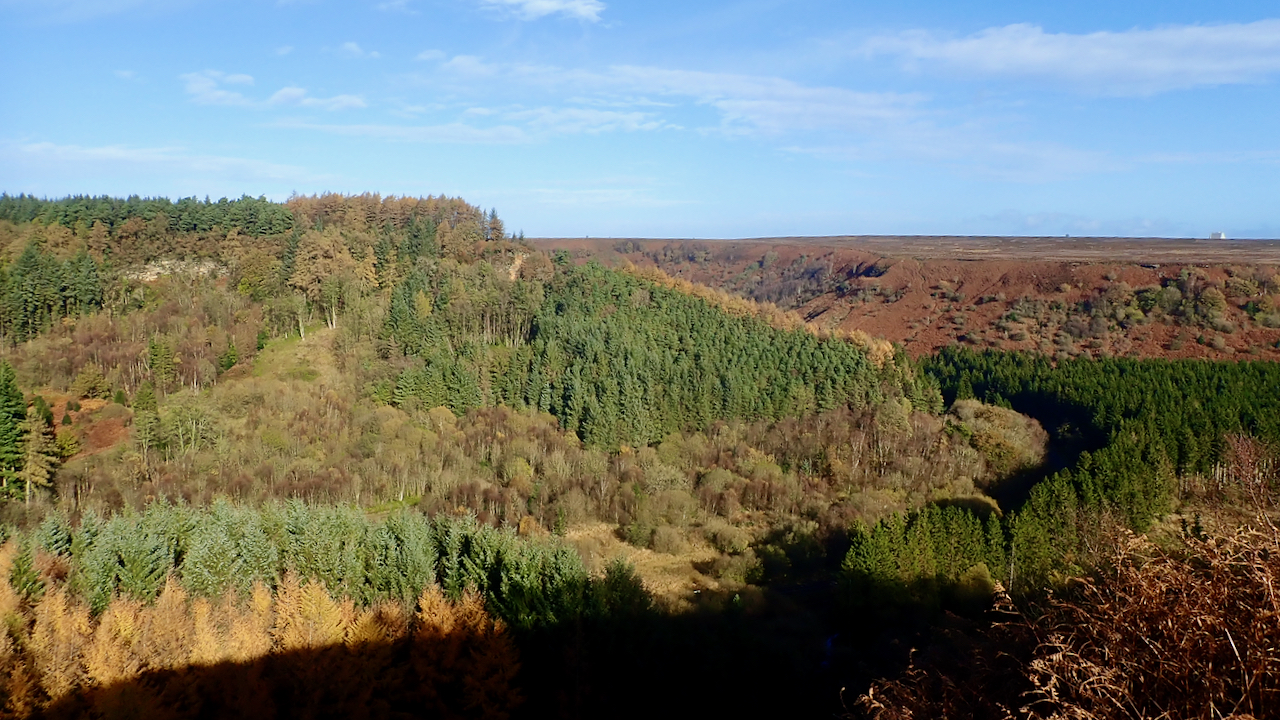 I came across an image a while ago from the British Geological Society website of a crag in Newtondale called Needle’s Eye. That must be worth a visit.

Unfortunately, the link no longer seems to be working so I’ve grabbed a copy from Google’s cache.

An extract from an 1836 book “Illustrations of the Scenery on the Line of the Whitby and Pickering Railway” by Henry Belcher includes a description of the Needle’s Eye:

On advancing a little farther, the main valley is discovered extending towards the west, and the railway, sweeping rapidly round the foot of a bold and lofty projection on the right, crowned by a large mass of rock, called from a perforation visible near its point the Needle’s Eye, brings the traveller into full view of the middle division of Newton Dale, extending about a mile before him, and of which the general character is peculiar, and singularly picturesque. The only portion of anything like level ground is that occupied by the railway; and even that has been artificially obtained, whilst on either hand the surface rises more or less abruptly to an elevation of about 500 feet, the upper part of which, from one to two hundred feet in height, consists almost entirely of bold perpendicular ranges of rock, large fragments of which lie scattered about the vale below.

On both sides of this division of the valley, and indeed in the greater part of North Dale also, are alternate projections and recesses, each corresponding to the other in so striking a manner, as to leave no doubt as to their having been in times long past one solid mass, which being riven assunder by some mighty convulsion of Nature has left the valley as it now appears.

On the north side of this part of the Dale is a fine semicircular range of rock called Killingnoble Scar “where the hawk High in the beetling cliff his eyrie builds.”

This Scar has for ages been celebrated for a breed of hawks, which is still to be found there. So far back as the year 1612, on the occasion of a commission from the crown to enquire into and ascertain the privileges and extent of the lordship of Goathland, it appears that evidence was then given to the effect that “there hath been hawkes bred in Newton Dale, in Killingnoble Scar, which the inhabitants of Goathland were charged to watch for the King’s use.”

It was still windy and damp when the dog and I set off from the Hole of Horcum but once past Saltersgate Bank, the wind began to ease. Needle Point was reached easily enough but was largely obscured by the forestry. There was no sign of the “perforation”; I suspect there had been a rockfall. The crags were impressive enough, oolite limestone of the Cornbrash Formation I think.

By the time, I had re-crossed the railway and climbed Yewtree Scar, the sky was blue and the sun bright. Looking back across the valley gave the best view of Needle Point of the day. The Killingnoble Scar in the quote above is named on the modern map as Killing Nab Scar and is to the left of the point.