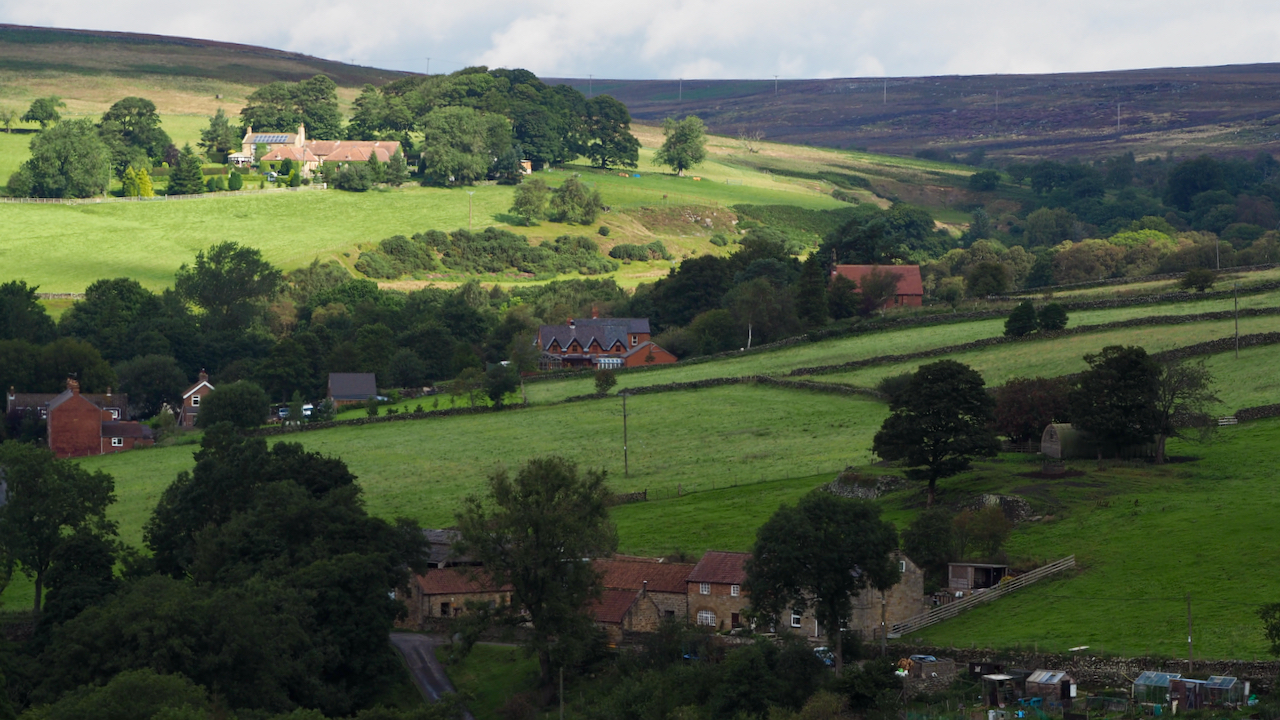 A view from the south of Commondale, named after Bishop Colman of Lindisfarne who had been a monk at Whitby in the 7th-century.

Top left, basking in the sunshine, is Skeldersceugh Farm which is likely to be the site of Skelderskew Grange, a monastic grange of Guisborough Priory. The name was first mentioned early in the 12th century as ‘Schelderscoh‘ and is derived from ‘skell‘, a rivulet, and ‘skew‘ or ‘sheugh‘, a wooded dell.

In the early 19th-century, an elaborate gilded copper cross was found there during building works. It is thought to date from the 15th-century although it has an inscribed date of 1119 which is the date of the founding of Gisborough Priory. This seems to suggest that there was a cell or chapel attached to the grange at Skelderskew.

The cross was presented to officers of the Leeds Rifles in 1910 as a memorial to the Rev Nigel Linnhe Tylston Hodgson, Acting Chaplain of the Leeds Rifles, who had been accidentally shot during manoeuvres on the Guisborough moors the year before. The cross is now in St Peters Church, Leeds.

Skelderskew Grange was also the scene of political conflict and family betrayal in the 16th-century. In the late 1530s, it was occupied by Nicholas Cockerill who was a bailiff of the priory at a time when King Henry VIII was in the process of dissolving monasteries throughout England. Gisborough Priory was not immune and the Prior had already been replaced by a King’s man, Robert Pursglove. Many in the north of England were opposed to these actions and in 1536 there was an uprising called the Pilgrimage of Grace, lead by Robert Aske a London lawyer, with many local landowners and leading churchmen committing their support including Sir Francis Bigod of Mulgrave Castle. Bigod was supported by James Cockerill, the former displaced Prior of Gisborough and brother of said Nicholas.

To defuse the situation and to bide time, Henry did a deal with Aske with the promise of pardons and parliamentary reforms. However, Bigod and many other mistrusted the King (quite rightly as it turned out) and instigated a further rebellion. Nicholas opposed Bigod’s rebellion and was subsequently attacked and robbed at his home at Skelderskew. In a document signed by Thomas Cromwell himself.:

“The Commons took his brother Nicholas at his house in Skelderscugh and threatened and held and beat him with their daggers’ pommels, when they took from him 5£. in money, seven silver spoons, a little flat piece of silver, 3 pairs of beads with silver gawdies, 20 head of cattle, oxen and kye and 3 horses, all because he refused to join them. His debts amounted to 961£. 13s. 4d. and the monastery owes him 350£ or thereabouts.”

Aske, Bigod and James Cockerill were among 216 rebels throughout the north who were convicted of treason and executed at the command of the King. Bigod’s land was confiscated.

After the dissolution, Skelderskew Grange was granted to Sir Ralph Bulmer, who on his death in 1558 passed it to his eight daughters, two of whom sold their shares to Robert Yoward, a family name who has appeared before in these blog posts.