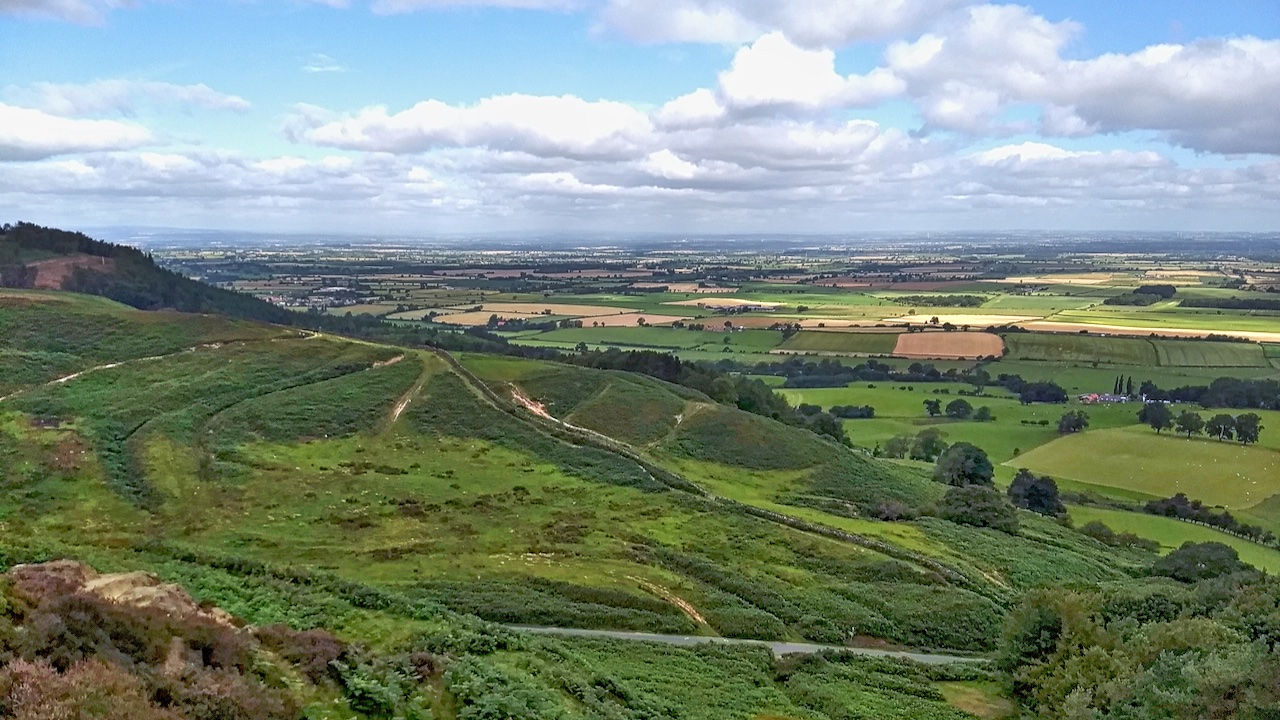 To me, this is one of most evocative features on the Cleveland Hills. It was the first landmark on my first visit to the North York Moors, on a crossing on the Lyke Wake Walk in June 1969. After descending the hill and crossing the cattle grid there was a sign saying “Ravenscar 39 Miles”; daunting when you don’t really know what to expect. But that sign has long since disappeared.

Scarth Nick is a notch in the hills formed during the last Ice Age when water that had dammed up between the Vale of York glacier and the Cleveland Hills, took advantage of a fault in the underlying geology.

The notch has certainly been used by man since the Roman times and was a natural signpost on the horizon after fording the Tees just west of Yarm. With the plains mostly woodland and marsh, the Hambleton Drovers’ Road offered an easier road for driving cattle south to markets at York and Malton.

Something I came across while researching was this little quote. It’s from “ A History of the Primitive Methodist Connexion” by John Petty, 1864:

“On Sunday, July 30th [1820], he [William Clowes, one of two founders of the Primitive Methodist connection] conducted a camp-meeting [open air meeting] upon a depressed part of a mountain called Scarth Nick. About two thousand persons were supposed to be present.”

Primitive Methodism was a branch of the Methodist Church that was established in the early 19th-century when two preachers, William Clowes and Hugh Bourne, were dismissed from the main congregation. Gatherings of large numbers of people were, at this time, treated with fear and suspicion. In 1820, the country was still reeling from the Peterloo Massacre which had taken place the year before. By the end of the year, laws will have been introduced to suppress radical meetings. Open-air meetings, held in secret, such as that described at Scarth Nick were a way of avoiding the attention of the authorities.

Primitive Methodism has a particular resonance for me. My great-grandfather was one of the founders of a Primitive Methodist chapel in Eastwood, Nottinghamshire, although by this time, in the latter half of the 19th-century non-conformist religions were accepted.

And I’ve just noticed that, by sheer coincidence, the 1820 gathering happened on this day exactly 200 years ago.

One Reply to “Scarth Nick”