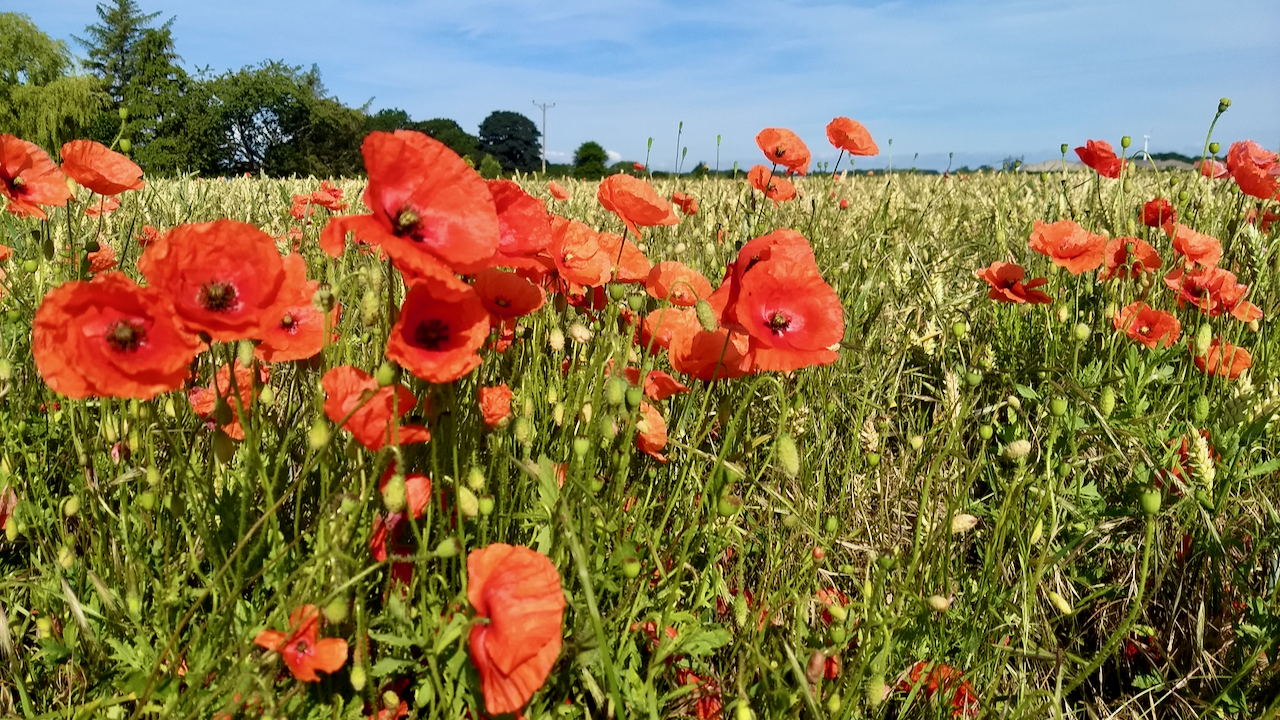 Look, how the Poppies flaunt their red-red flags
O’er all yon cornfield,—beauty out of place!
So when the angel Peace would bless our race,
The demon War, in horrid triumph, drags
His gore-stain’d chariot; drums and trumpets sound
To nerve the soldier’s arm to burn and slay,
And showy banners are unfurl’d alway,—
All fitter far for peace. How ‘t will redound
To human happiness when men shall learn
That wars are all unneeded! We can take
The Poppy’s juice, and from it we can make
An anodyne to pain: but when we burn,
Blow up, pull down, or (worst of all) take life,
Our acts perforce with misery are rife.

I’ve quoted this because Tweddell was a local Stokesley born poet. There is a second verse if you’re so inclined but I must admit I don’t find the poem particularly enthralling. What is curious though is Tweddell’s reference to war and ‘gore-stain’d chariot‘. This was written in 1842/3, over 70 years before the First World War and the poppy’s association with the fields of Flanders and a symbol of remembrance.

Poppies have been used in traditional folk medicine since pre-history, generally for gout, aches, and pains. A syrup made from the petals was once fed to children to help them sleep. In North Lincolnshire, there is a drink called ‘Headache-wine‘, also made from the petals, and elsewhere the red flowers are called ‘Yeddocks‘ or ‘Headaches‘ because of the sickly smell, said to cause headaches.

In parts of Yorkshire, the poppy is known by the name of ‘Blindy-buff‘ or ‘Blind-eyes‘, in the belief that if you hold a poppy to your eyes it will blind you. These folk names serve as a warning to be wary of the flowers, which are also said to be particularly ‘obnoxious to females, the more so to unmarried young women, who have a horror of touching or of being touched by them‘.

Another grouping clearly refers to the striking colour of the petals: Red-mailkes, Scarlet-poppy, Red-petticoat, Soldier (I guess this is symbolic of an 18th-century soldier’s red tunic), Redweed, Bledewort (another guess that this is a blood reference).

You pays your money …