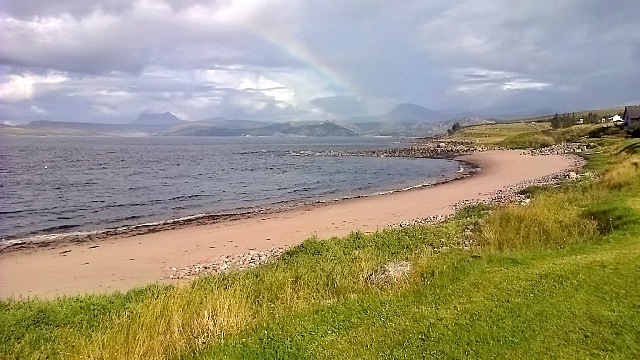 Fuelled by President Trump in a blatant attempt to shift blame for the handling of the coronavirus epidemic from himself, the suggestion that the virus was manufactured in a Chinese laboratory has now hit the mainstream media rather than being confined to conspiracy theorists in the darker reaches of social media.

But it would do us well to remember that Britain (and no doubt America) is not so innocent when it comes to biological weapons.

This is Gruinard Bay in Ross and Cromarty looking out onto Gruinard Island and a backdrop of the mountains of Coigach and Assynt. Quite and peaceful today but the scene of a notorious experiment that left the island contaminated for 48 years.

Operation Vegetarian was a WW2 British plan to drop linseed cakes infected with anthrax spores onto the fields of Nazi Germany. These would have been eaten by the cattle, which would have been decimated, creating a massive food shortage for the civilian population. Any consumption of the meat would be fatal.

But before in 1942, an experiment was carried out to determine the effects of anthrax bacterium. 80 sheep were taken onto the 196-hectare uninhabited Gruinard Island, tethered and bombs filled with anthrax spores were exploded near them. They quickly became infected and began to die within days.

Once the tests were completed, it was concluded that a large release of anthrax spores would thoroughly pollute German cities, rendering them uninhabitable for decades afterwards. By this time it was 1944 and of course, the plan was never implemented.

After the war, the scientists had great difficulty in decontaminating the island as the spores proved to be very resistant.  Eventually, the operation was considered too dangerous and expensive and Gruinard Island was quarantined indefinitely.

In the 1980s, after a public protest, a new attempt at decontamination was made. The island was sprayed with 280 tonnes of formaldehyde solution diluted with seawater and the worst of the contaminated topsoil removed. A flock of sheep was then left to graze and remained healthy. In 1990, the island was declared safe and returned to the heirs of the original owner.
 Open Space Web-Map builder Code