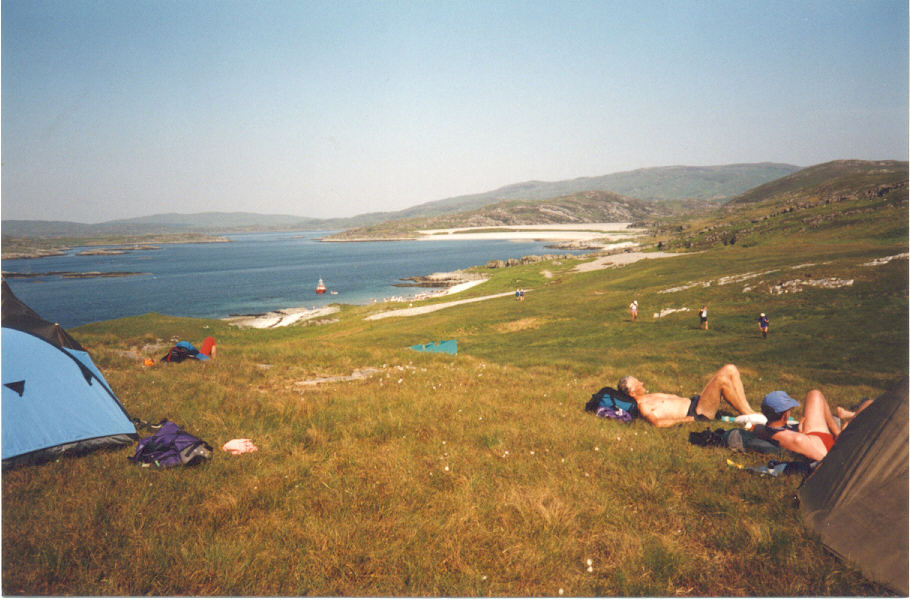 This is a scanned image and to be quite honest, I am not 100% sure that it’s actually one of mine. I did do the 1997 Lowe Alpine Mountain Marathon with my eldest son, who would then have been 17. However neither he or I are in the photo and I can’t think why anyone would pass a photo on to me if we weren’t in it, so logically I must have taken it but then I haven’t come across any other photos for that weekend.

The scene is the overnight camp at Glen Batrick on Jura, a big island in the Inner Hebrides. An island that has traditionally more deer than humans who all live almost exclusively on the narrow eastern coastal strip. The rest is entirely uninhabited, a mixture of mountain, bog and heath, and dominated by the renowned Paps of Jura of which Beinn an Oir at 785m is the highest of the three, the hill of gold.

The rocky headland in the distance is Rubh’ a’ Bhaillean. Those competitors walking in across the raised beaches are in the elite race and have just been boated across Loch Tarbert from their finish on the northern part of the island.

It’s June and a heatwave means the midges will not be a problem until the sun goes down but these early finishers are leaving themselves available for a meal by the deer ticks. I remember seeing them crawling across my Karrimat on the scent of blood. Tiny things, like baby spiders, crawling up my legs to the soft spots at the back of the knee and other unmentionable places where, once attached, they begin to suck your blood, swelling to the size of a pea.

Glen Batrick is on the 20,000-acre Tarbert Estate, supposedly owned by Lord Astor, who is the stepfather of former Prime Minister David Cameron. I say supposedly because actually ownership is hard to trace as it is actually listed as an offshore company based in the Bahamas, and “there is ‘no means of verifying’ who the beneficial owners are.”
 Open Space Web-Map builder Code