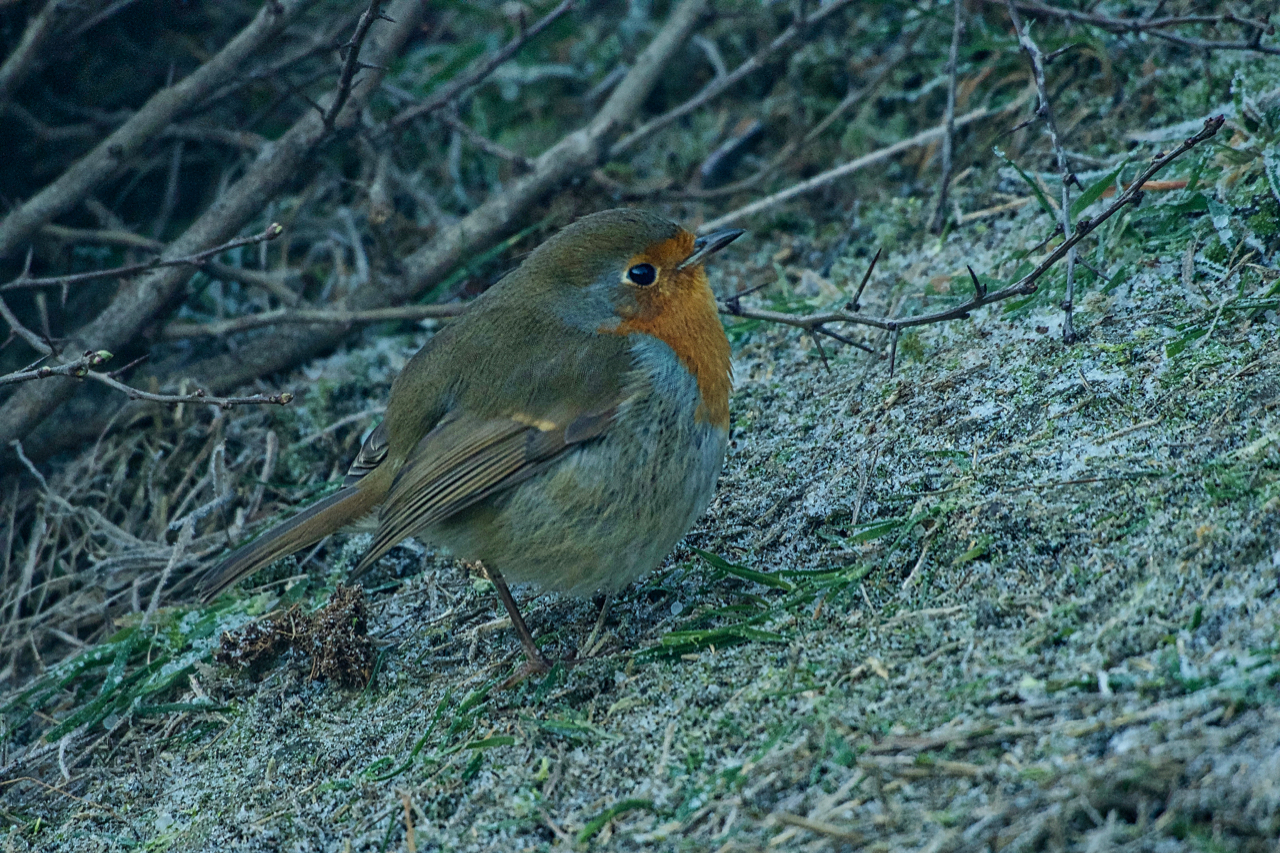 Working in the shade of Roseberry, where the frost persisted all day. Two years ago, almost to the day, we planted a new hedge along the north-western boundary of Roseberry Common. Some of those saplings have failed to thrive and so the task today for the National Trust volunteers was to fill in the gaps.

A Robin, feathers puffed up against the cold air, took an interest, searching the hawthorn whips for insects and other invertebrates. Its red breast gave the nickname ‘Robin Red-breasts’ to Victorian postmen, because of their red waistcoats. But in spite of its association with wintery Christmas cards, Robins have a more sinister cultural pedigree. A robin in the house was said to be a sign of death perhaps because its breast had been scorched fetching water for souls in Purgatory.

The Robin is, of course, immortalised in the children’s nursery rhyme, Who killed Cock Robin?

The rhyme was used to satirise the 1819 “Peterloo Massacre” when a gathering of 100,000 people in St Peter’s Fields in Manchester was broken up by the militia with between ten and twenty people being killed, and several hundred more injured. The history has now been made into a major film.

These are the Manchester Sparrows
Who killed poor Robins,
with bows and arrows.

This is the big-wig crew,
who decide, at sight,
That Sparrows might lawfully
kill Robins outright.

This is the prince of birds.
The proud Peacock,
now curaiss’d in mail,
struts unconcern’d
at cock Robin’s sad tale.

100 years after Peterloo and, by coincidence, exactly 100 years ago to this day another protest was violently put down by the authorities. The “Battle of George Square” took place in Glasgow on Friday 31 January 1919. Workers, striking for shorter working hours, clashed violently with the police. The British government, fearful of a deteriorating situation, sent soldiers and tanks into the city to prevent any further gatherings. This decision was taken by a meeting of the Cabinet which included Winston Churchill, Secretary of State for War and Robert Munro, Secretary of State for Scotland and chaired by Andrew Bonar Law, Leader of the House of Commons.
 Open Space Web-Map builder Code

One Reply to “Your friendly neighbourhood Robin”