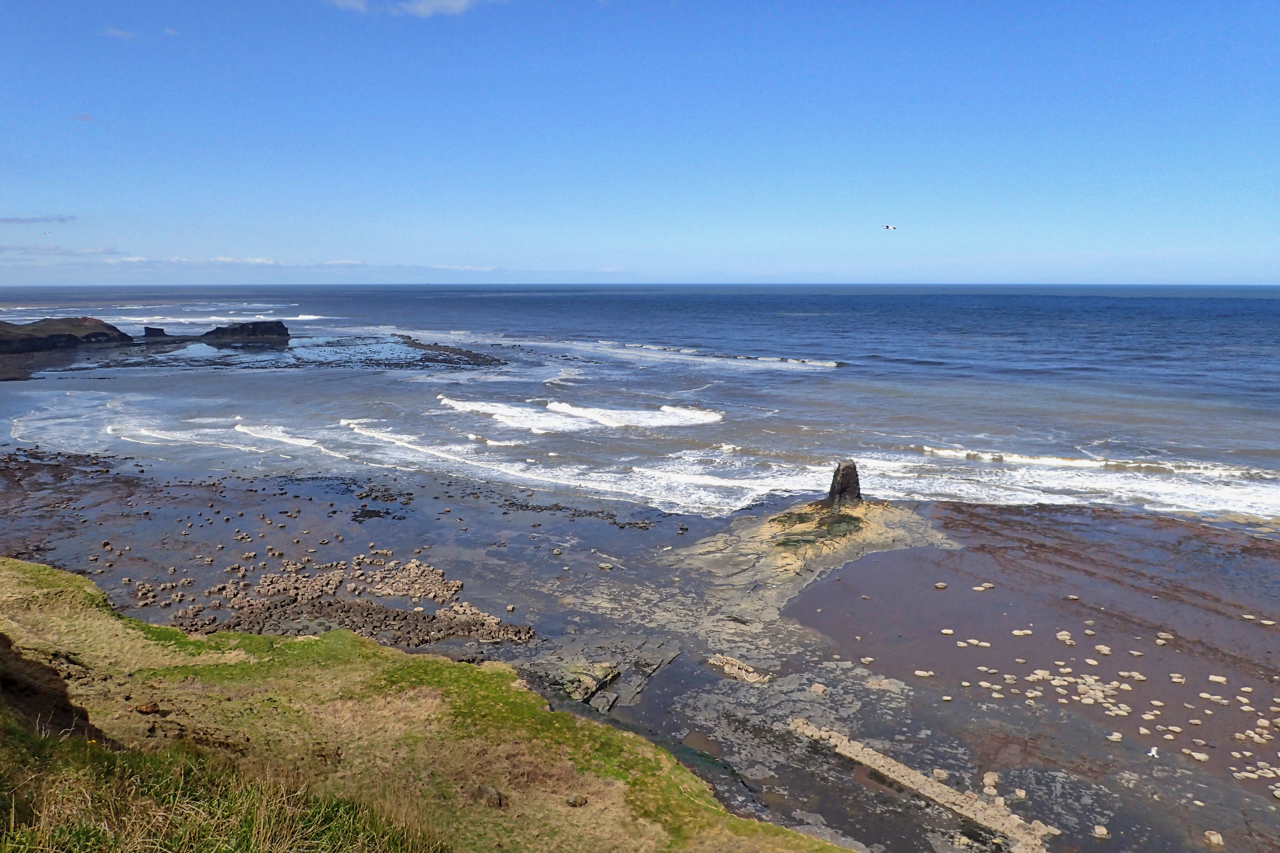 From the Cleveland Way, Saltwick Bay at low tide looks benign and peaceful. It is a glorious spring day. Families are relaxing on the beach, rockpooling, or just strolling. But the bay has a history of industry and disasters.

Alum was quarried at Saltwick Bay in the 17th and 18th centuries. The main quarry for the shales was on the promontory in the distance, Saltwick Nab, with the alum making processes, burning, distilling and crystallisation being carried out on the foreshore. The onshore winds would have dissipated most of the noxious fumes but much would have lingered. Broad, flat-bottomed barks exporting the alum crystals and bringing in coal and barrels of urine necessary for the chemical process from the coastal towns would have been sailed in at high tide and beached. A loading platform can be seen bottom right in the photo.

The Yorkshire Coast with its shallow scars of mudstone was a dangerous place for shipping. Saltwick Bay was no exception. Just to the left of the ruined pier is the wreck of the trawler Admiral von Tromp which came to grief in 1976. Two of the crew died, one man survived by clinging to Black Nab, the small stack right of centre. The exact reason why the von Trump ran aground is a mystery and is featured in the Channel 4 documentary Britain at Low Tide which also features the alum workings.

In the early hours of 12 January 1917, the SS Brentwood, a 1,192-ton steamship was making its way from London to North Shields when it hit a German mine. She took just 4 minutes to sink but the crew of fourteen all survived. The wreck lies offshore at a depth of 40 metres.

But perhaps the most famous shipwreck of Saltwick Nab is the hospital ship SS Rohilla. She sank in the bay in 1914 on her way from Leith to Dunkirk. Again it is believed she hit a German mine off Whitby and Captain Neilson decided to beach her to give the best chance of rescuing the 229 crew, nurses and medical staff on board. The rescue turned into a major operation with lifeboats from Whitby, Upgang, Redcar, Tynemouth and Scarborough all trying but failing to get close to the stricken vessel lying just to the north-west of Saltwick Nab, just too far for rockets from the shore to reach so that a bosun’s chair could be set up. The rescue lasted 3 days during which 146 were rescued including Captain Neilson, the last to leave his ship, and all the nurses, which included Titanic survivor Mary Kezia Roberts. The ship eventually broke up over a wide area. The biggest parts are 500m offshore at a depth of 5-12 metres but some wreckage can be seen dry at low tide just beyond Saltwick Nab.
 Open Space Web-Map builder Code

One Reply to “Saltwick Bay”