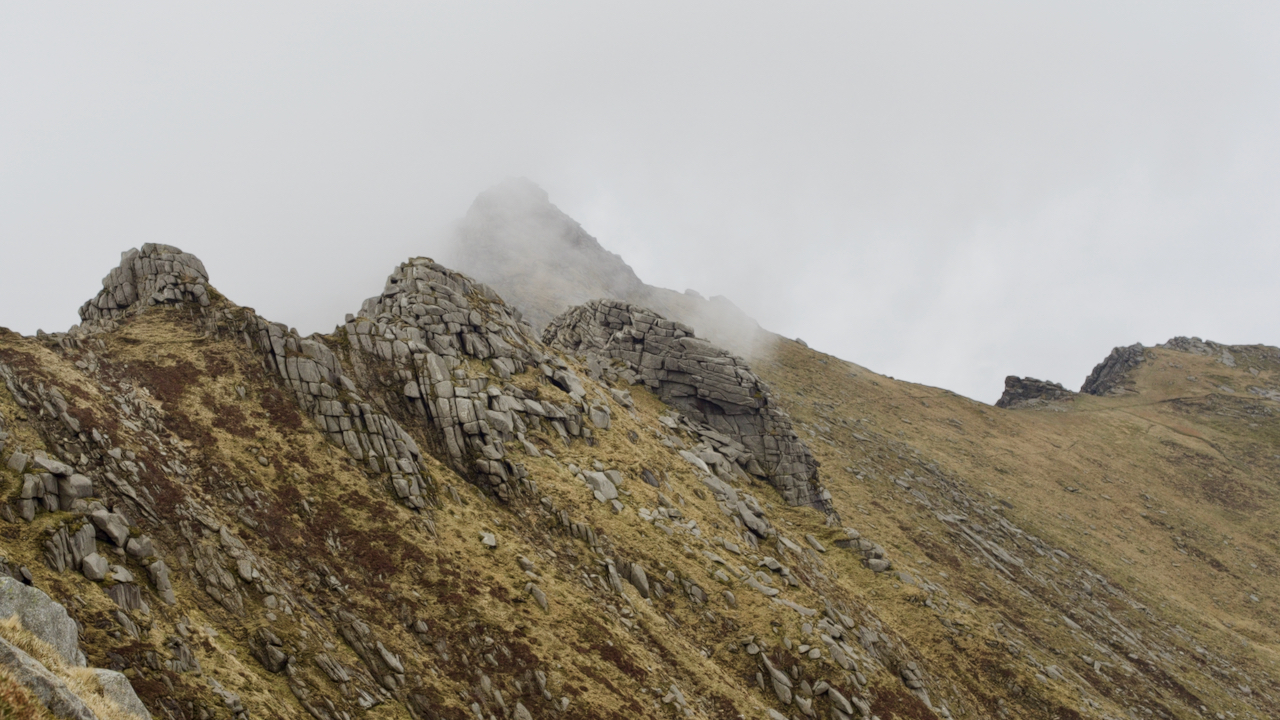 with its subsidary top, North Goatfell

. Momentarily cleared in the swirling mists.

The main route up Goatfell is a well-graded trail, and very popular, almost a pilgrimage. The Stacach ridge

is a bit more serious.

, at 829m, out of shot to the right. Below Mullach Buidhe, on the far side, is Coire nam Fuaran

, where there is a howff, a rudimentary shelter made of rocks.

It was in this howff, in July, 1889, that the decomposing body of Edwin Rose was found, three weeks after he had left London for a week’s holiday in Scotland. His skull had been shattered and his spine broken; an attempt had been made to conceal his body. His hat and walking cane were found further up the corrie1Mountain-top death: Did he slip or was he pushed? The Scotsman . 08 October 2005, Available online: https://web.archive.org/web/20191014124511/https://www.scotsman.com/lifestyle-2-15039/mountain-top-death-did-he-slip-or-was-he-pushed-1-465841[Accessed 7 May 2022]..

Attention fell on 25-year-old John Laurie, a pattern-maker from Glasgow. The two men had struck up a friendship on Bute and had travelled together to Arran with the aim of climbing Goatfell2Ibid..

Late on the evening of the ascent Laurie was seen at the Corrie Bar in Brodick. The following day, he abruptly left the island without paying his bill and was seen by several witnesses clutching a striped jacket which was later revealed to be Rose’s3Ibid..

A manhunt was launched which Laurie evaded for two months. Eventually he was captured and charged with the murder of Edwin Rose. During his apprehension Laurie attempted to commit suicide using a cut-throat razor. Upon his arrest Laurie stated “I robbed the man, but I did not murder him.”4Ibid.

By today’s standards the evidence against Laurie seems pretty flimsy, being based upon Laurie’s “conduct” and his run from the law. No blood was found on Laurie’s clothes, or indeed there was nothing that linked him to the murder, though clearly he had robbed Rose of some of his possessions5Ibid..

Initially the Crown had claimed Laurie battered Rose with a stone though this was easily medically disproved. Rose’s cane and hat were apparently in a position that was “consistant with a fall“. The suggestion then was that Laurie had pushed Rose over a crag.

Nevertheless, the jury convicted Laurie of murder by a majority of one after just 45 minutes’ deliberation. On being sentenced to death by hanging, Laurie ‘in a clear, unshaken voice, said—”Ladies and gentlemen, I am innocent of this charge.“7Ibid.

So did Rose die as a result of a fall, and then Laurie seized the opportunity to make off with his belongings after attempting to conceal the body?

Or did Laurie give Rose a little push?