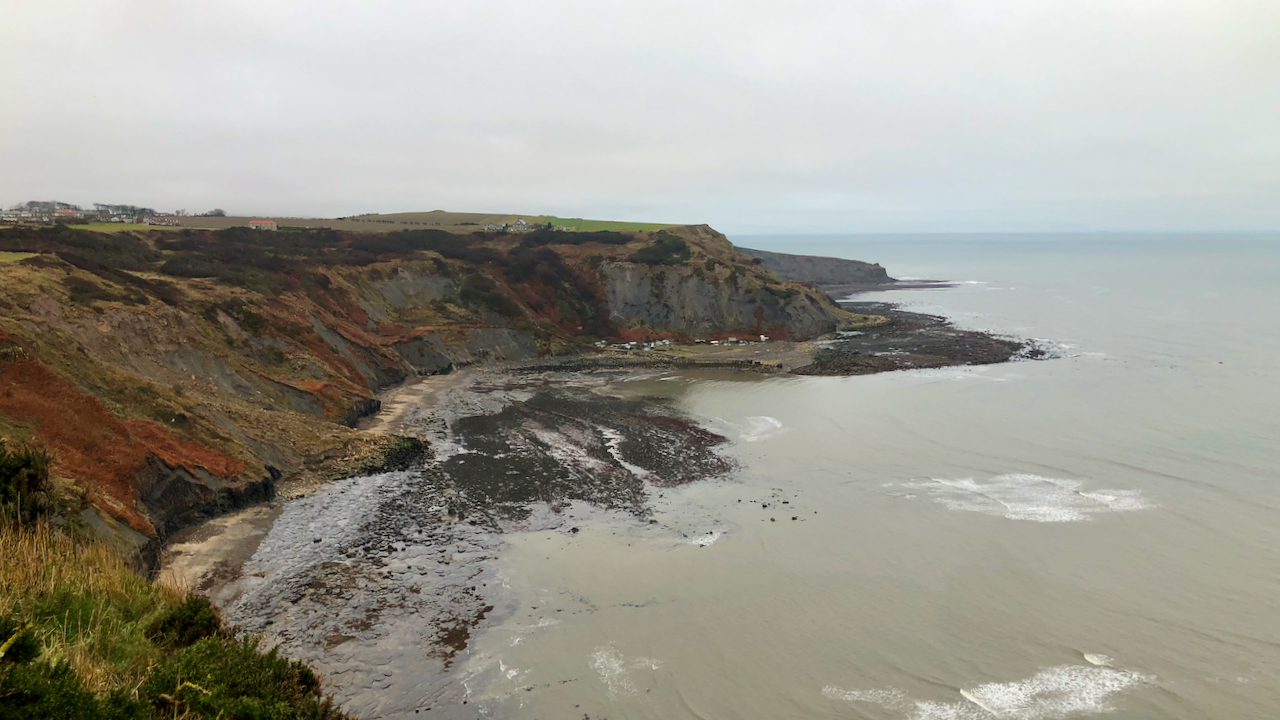 The coast provided an escape from the inland mist. This is Port Mulgrave, once an active harbour east of Staithes, where ironstone was exported to foundries on Tyneside.

There is still no easy way down to the harbour. Once there were steps used by the men to descend every day to work on the quays and gantries, the cranes and tips, and the ships. These steps have long disappeared, and a galvanised metal set of steps that replaced the makeshift path is currently closed due to a landslip. Prior to this there was another landslip in 2016 when I was involved with the National Trust in remedial work to clear the path.

Half way along the beach is evidence of another recent landslip.

Port Mulgrave is home to a small community of fishermen, with their huts, boats and tractors. I have often wondered how they got their tractors on the beach. A report from 1995 perhaps provides a clue.

I did say 1995, a year when I was certainly familiar with the harbour, and the report made the national newspapers. But I have no recollection.

In 1995, his boat was completed but a couple of obstacles stood between him and the sea. Firstly, his garden was only accessible through a cornfield as it had been cut off from the track that led down to the harbour by a development.

The second minor obstacle was the 300-foot cliff face.

The farmer of the field refused permission but Walker moved his boat anyway, dragging it the 400 yards through the cornfield at a rate of 60 yards a day. The farmer just happened to be on holiday at the time. Solicitors’ letters followed but Walker thought “What the hell”.

The move was the talk of the village; there was a turn out of 200 onlookers, and a local councillor served drinks.

In order to lower his boat down the cliff, Walker “dug a trench right down the face“. This incurred the wrath of English Nature as it is a Site of Special Scientific Interest because of its layers of rock and fossils. It is “regarded as the standard textbook example of a particular chapter in geological time, the layers date back 180 million years. The site is one of the few where Whitby jet can be seen at the surface.”2‘Old man’s short cut to the sea mars geology site’ (1995) Times, 07 Sep, 5, available: https://link-gale-com.ezproxy.is.ed.ac.uk/apps/doc/IF0503412648/GDCS?u=ed_itw&sid=bookmark-GDCS&xid=2893a381 [accessed 19 Dec 2021].

I wonder if there is any connection between Mr. Walker’s trench and the recent landslips.