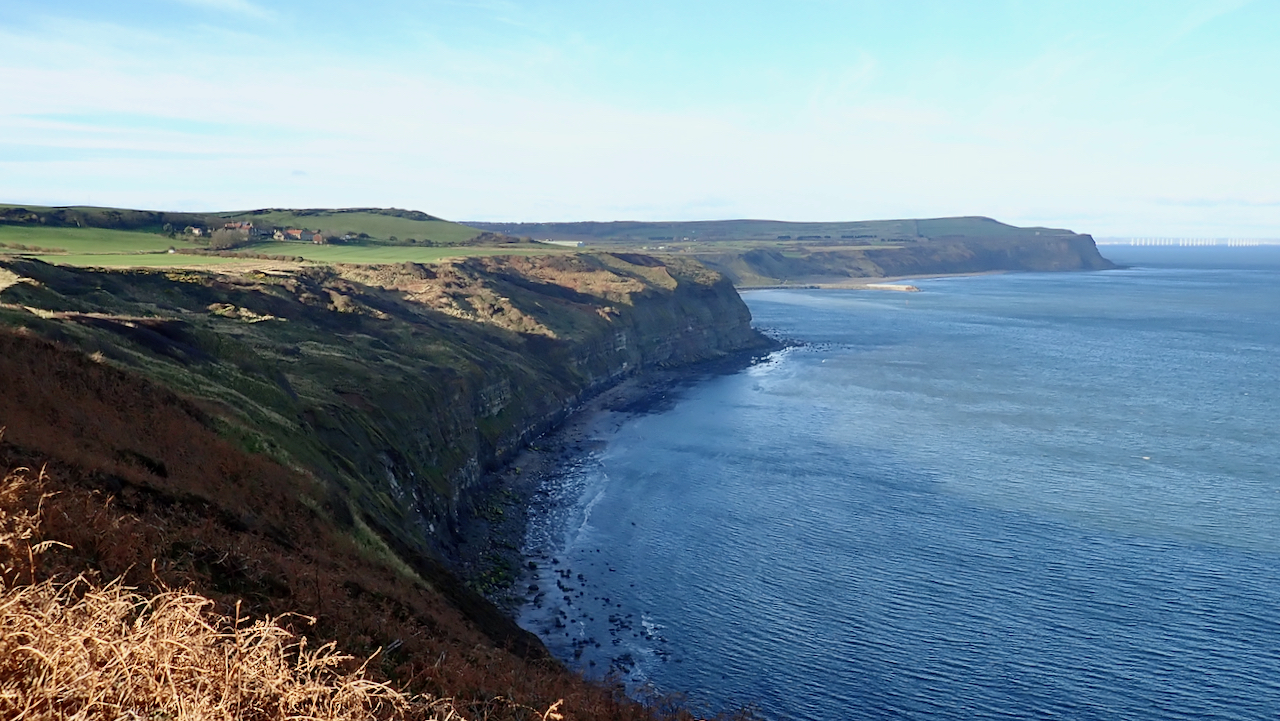 I’ve had it in mind for some time now to explore the Public Footpath which drops down Hummersea Bank to the beach. Well, I say beach, but it’s just a sandy rocky sliver only dry at low tide.

On the featured photo above, on the left is Hummersea Farm and in front of that, is a hedgerow. Here the footpath descends, zigzagging first in the sunlight before hitting the shade of the near-vertical bank and down by some rickety, rotten wooden steps, patched up no doubt by local fishermen. I can attest these steps are very slippery.

The final fifteen feet or so is down a section of iron steps that has been dislodged and is now hanging at a precarious angle. I’d met my limit.

From the top of the steps, the back walls of a stone building were visible. It seems to be generally accepted that this is not part of the Lofthouse Alum House and are probably associated with some ancillary industry. Suggestions are a kiln for cementstone (a lime-rich rock suitable for making Roman cement), or for burning kelp, or even a tunnel entrance which connected with a shaft to the cliff top(*). The alum house itself has long since disappeared as the coastal cliffs have receded but there are some very interesting photos here, however it is opined that this building was too large solely as an alum house and may have incorporated some of these ancillary industries.

Going back up the hill to Hummersea Farm, top left in the featured photo. This was the home of Lewis Hunton whose father and grandfather had been agents for the alum works. He was born in 1814 when the alum industry was still very active. At the age of just 21, he presented to the Geological Society of London a pioneering paper which proposed the principle of investigating fossils to determine the comparative age of rocks. Rocks with the same fossils were of the same age. Without a doubt, his boyhood spent scrambling down to the beach searching for ammonites and belemnites, must have nurtured his interest. However, Lewis never saw his principle accepted, for he died from tuberculosis two years after its publication.