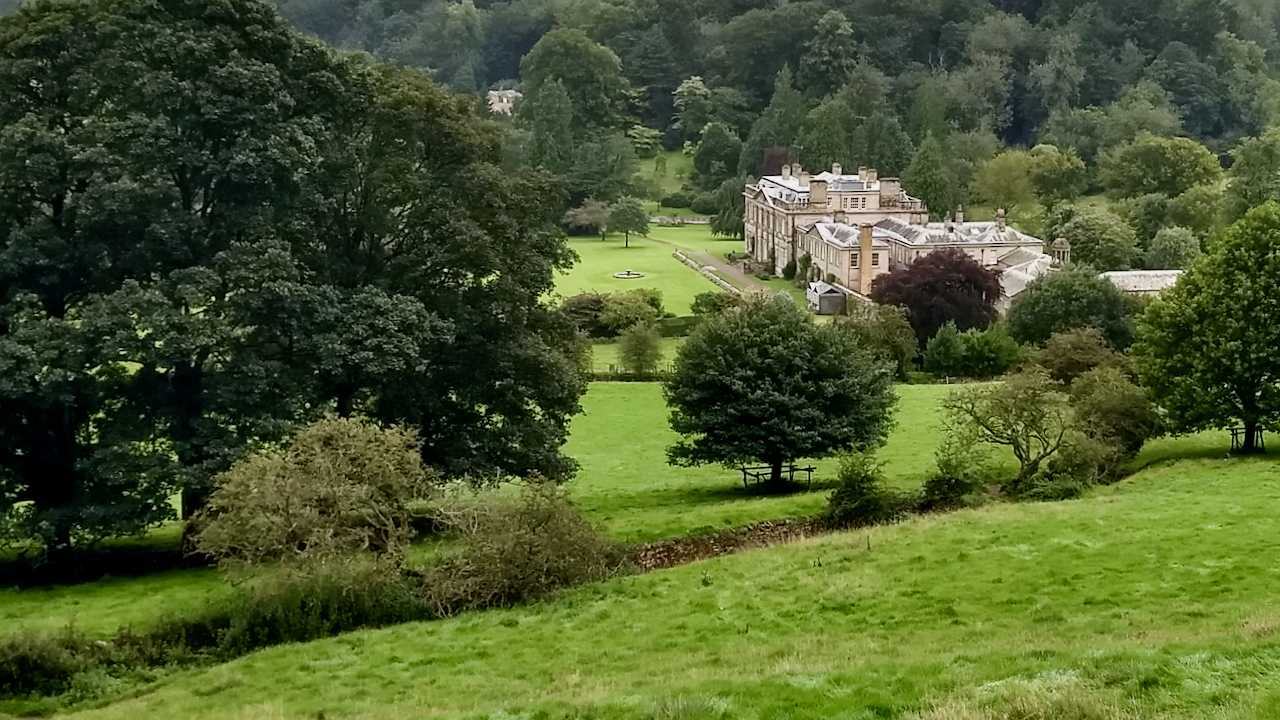 I had a look around the Forge Valley near Scarborough, a place I’ve always wanted to see but never had the opportunity. I must admit, I wasn’t that overwhelmed. A dense tree canopy and lots of mud. Still, it’s good to explore somewhere new.

Hackness Hall was impressive though and with a colourful bit of history attached.

But the monochrome stuff first: built in the 1790s by Sir Richard Van den Bempde-Johnstone and almost suffered the fate of many country houses when, in 1910, it was almost gutted by a fire.

Now we have to go back to an earlier building, to the year 1600 for an episode that is still referred to as the ‘Hackness Shame’. The lord of the manor at this time was Sir Thomas Posthumous Hoby, the second son of Sir Thomas Hoby of Bisham in Berkshire. He was given the name Posthumous because his father had died of the plague whilst on diplomatic duty in Paris three months before his birth.

Sir Thomas Posthumous Hoby was very well connected. His father had been well respected, Queen Elizabeth who was so upset by his death that she agreed to become young Thomas’s godmother.

Thomas’s mother was Elizabeth Cooke, whose eldest sister, Mildred, was married to William Cecil, the first Lord Burghley and the Queen’s Lord Treasurer. Their two sons, Robert and Thomas Cecil, so Thomas’s cousins, were Principal Secretary and Lord President of the Council in the North at York respectively. Another of Thomas’s cousins was Sir Francis Bacon, son of Elizabeth’s youngest sister, Ann, and Sir Nicholas Bacon. And finally, when he was eight his widowed mother married Lord Russell, the son and heir of the Earl of Bedford.

As a second son, Thomas would not inherit so a military career beckoned, for which he received his knighthood. The other thing worth noting is that Thomas was a Calvinist, a strict puritan. In 1596, he married the 24-year-old twice-widowed Lady Margaret Sidney of Hackness who had inherited the 11,000 acres Hackness estate worth £1,500 a year, including the rectory of its church, the villages, farms and woodlands of Langdale, Everley, Broxa, Suffield, Silpho and Harwood Dale, 200 properties and four mills on the River Derwent. Lady Margaret was perfect, for she too had been brought up as a strict, puritan Calvinist.

But Sir Thomas’s arrival in Yorkshire did not go well with the local gentry who considered him to be a southern carpet-bagger and a spy against Catholicism. His puritan beliefs of no music, no dancing, sermons and simple meals aroused suspicions. There was also plenty of gossip about his sexual potency, particularly because of Lady Margaret’s failure to conceive.

In an August evening of 1600, a large hunting party arrived at Hackness Hall claiming that they had been out all day in Pickering forest and now needed refreshment and rest for the night. Although uninvited, Sir Thomas felt obliged to provide hospitality. The party, after all, consisted of six young members of the local gentry together with their servants, horses, dogs and hawks. There were two members of the Eure family of Malton, Sir William, the brother of Lord Eure, and another William, son and heir of the lord; William Dawnay of West Ayton, who was married to a Eure; Richard Cholmley, eldest son and heir of Sir Henry of Roxby castle and Abbey house, Whitby; William Hildyard of Bishop Wilton; and Stephen Hutchinson of Wykeham Abbey.

As the evening progressed, the party, fully aware of Sir Thomas’s religious beliefs, became drunker and more boisterous. Cards and dice were played; their talk was loud and foul, and consisted mostly of dogs, horses and hounds. They laughed out loud and stamped their feet during evening prayers. Their course behaviour continued the next morning when more wine was demanded. One of the party, Sir William Eure, forced his way into Lady Margaret’s chamber on the pretext of speaking to her, even though she claimed she was unwell. On their departure, they trampled over a newly-laid courtyard and threw stones at the Hall’s glass windows, calling Hoby a “scurvy urchin” and “a spindle-shanked ape” in front of Lady Margaret.

Sir Thomas complained to the Court of the Star Chamber in London, claiming that the assault had been an intentional abuse of his hospitality, his religious beliefs, and his authority in the neighbourhood as an officer of the Crown. Although the culprits denied all his charges, the Court found in his favour.

The actual details of the judgement are not known but apparently, the Eure estate had to pay the Hackness lordship £100 a year in perpetuity and Lord Downe of Wykeham Abbey still pays £60 annually to Lord Derwent for “the Hackness shame”.

2 Replies to “The Hackness Shame”