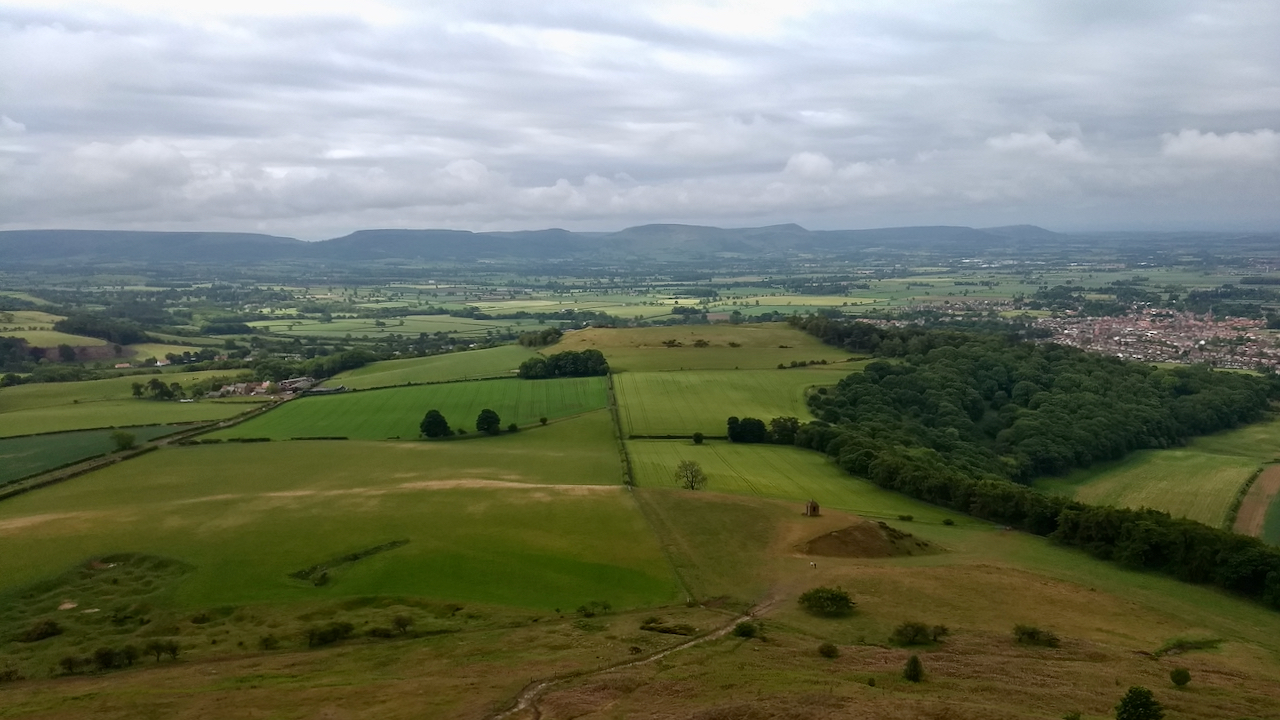 I’ve always tended to miss out Roseberry summit if I see it crowded, but I did bag the top today. Overcast but still clear enough for views to the Cleveland Hills, just a wisp of low cloud over Round Hill on Urra Moor.

Upper left in the photo is Aireyholme Farm at the end of Cliff Rigg with Newton Wood the eastern end. Great Ayton village far right.

Down below, the folly stands on the edge of the underlying ironstone strata, the grasses parched by the Spring drought. The scorching of the grass continues across the field to the left of centre. Evidence as to the limit of this strata, actually a distinct slope. The broken ground bottom left is where the ironstone was mined too close to the surface. Over time the ceilings have collapsed.

This large field was once divided into two, Hunters Field and High Well Field with the boundary running along the bottom of the distinct slope. The name High Well Field suggests a spring hereabouts but mining activities will have long disrupted the hydrology of the area.

In 1826, local landowner George Jackson was trying to increase the amount of cultivated land. This is probably when High Well Field was created. His labourer was clearing away stones and scrub prior to ploughing when he came across, ‘lodged in the cleft of the rock’ a hoard of bronze implements: axes, a knife, a mould in two halves, a spearhead, a chisel, and gouges. Fourteen objects in all.

Although Jackson recognised the hoard’s value he was not interested in archaeology so he just took it home and forgot about it. I can relate to that. It was several years later then that he passed it on to a local antiquarian who sold it to a Thomas Bateman of Derbyshire. Bateman’s collection would eventually end up in Sheffield Museum where the hoard remains to this day.

The objects have been dated to the very end of the Bronze Age around 550 BC, a time when ironworking as becoming established in western Europe. Why the hoard was buried and why it was never recovered, can only ever be guessed. The moulds have suggested to some that it was a cache of an itinerant bronzesmith who died before retrieval. About forty other similar hoards have been found in Yorkshire.

One Reply to “The Roseberry Hoard”