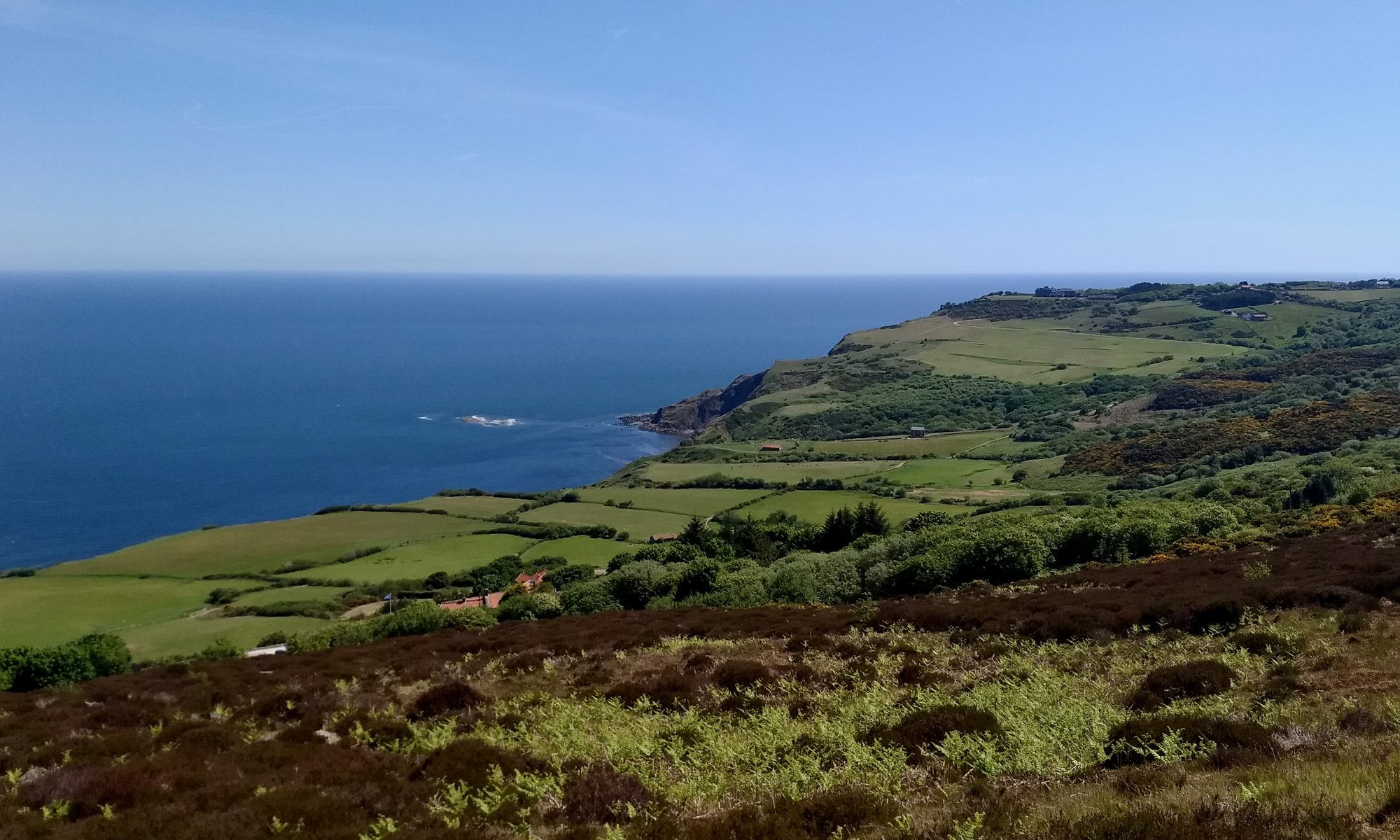 Stoup Brow Moor is rich in historic features, including round barrows, boundary markers and numerous neolithic rock carvings that were discovered after intensive moorland fires in 2003. But yet again these carved rocks proved elusive, buried by 17 years of heather growth.

But turn your back to the moor, cast your eyes east and you will be rewarded with a magnificent view of the coast from North Cheek (Ness Point) near Robin Hood’s Bay to South Cheek (Old Peak) below Raven Hall Hotel.

The Raven Hall Hotel dates from the 18th-century built on the site of a Roman signal station and 5th-century fort. It was substantially enlarged, altered and rebuilt in the 1820s and again at the end of the 19th-century when Ravenscar was being developed as a holiday resort [Ref014].

The Ravenscar Estate Company was formed in 1895 to take advantage of the craze for seaside holidays. It was perhaps a latecomer. Filey, Bridlington, Scarborough and Saltburn had been successfully developed. Withernsea and the West Cliff at Whitby less so. Ravenscar was a financial disaster. The infrastructure of the new town, kerbed roads, drains, the railway station were all built. Some of the roads can be seen crossing the golf course below the hotel. Plots were laid out with just a few being sold meant that this speculative development failed. Part of the problem was the steepness of the 300-foot cliff to access the “beach”. A funicular railway or lift would really have been required for all but the fittest resident or visitor. The company went into liquidation in 1913.

Whilst contemplating the view, a forgotten memory came to me of an aircraft flight from Stoup Brow to Scarborough, landing on the beach. It was actually a glider flight. In 1930, the sport of gliding was in its infancy. Stoup Brow was being used by the Scarborough Gliding Club to launch from with a view to a more permanent development. On the weekend of 23rd/24th August, the star of the show was Herr Karli Magersuppe, one of a number of talented German pilots who favoured England because of the restrictions imposed on German aviation by the Treaty of Versailles.

The first day was foggy and only a few flights took place. Sunday was more favourable, and 2,000 people gathered to watch the spectacle. In the afternoon Magersuppe damaged his own glider. It was catapult-launched but failed to get lift, hitting a rock in the heather. He had more luck than me finding rocks in the heather. Then the Scarborough club’s “Zögling” glider was damaged too when it crashed on landing. Both pilots were uninjured.

Exactly a year to the day later, Magersuppe, this time flying an Airspeed Tern, used Stoupe Brow again to launch from and this time succssfully landed at Scarborough thereby setting a British distance record of 8.3 miles. This is the straight-line distance, Magersuppe actually flew a total of sixteen miles.
 Open Space Web-Map builder Code