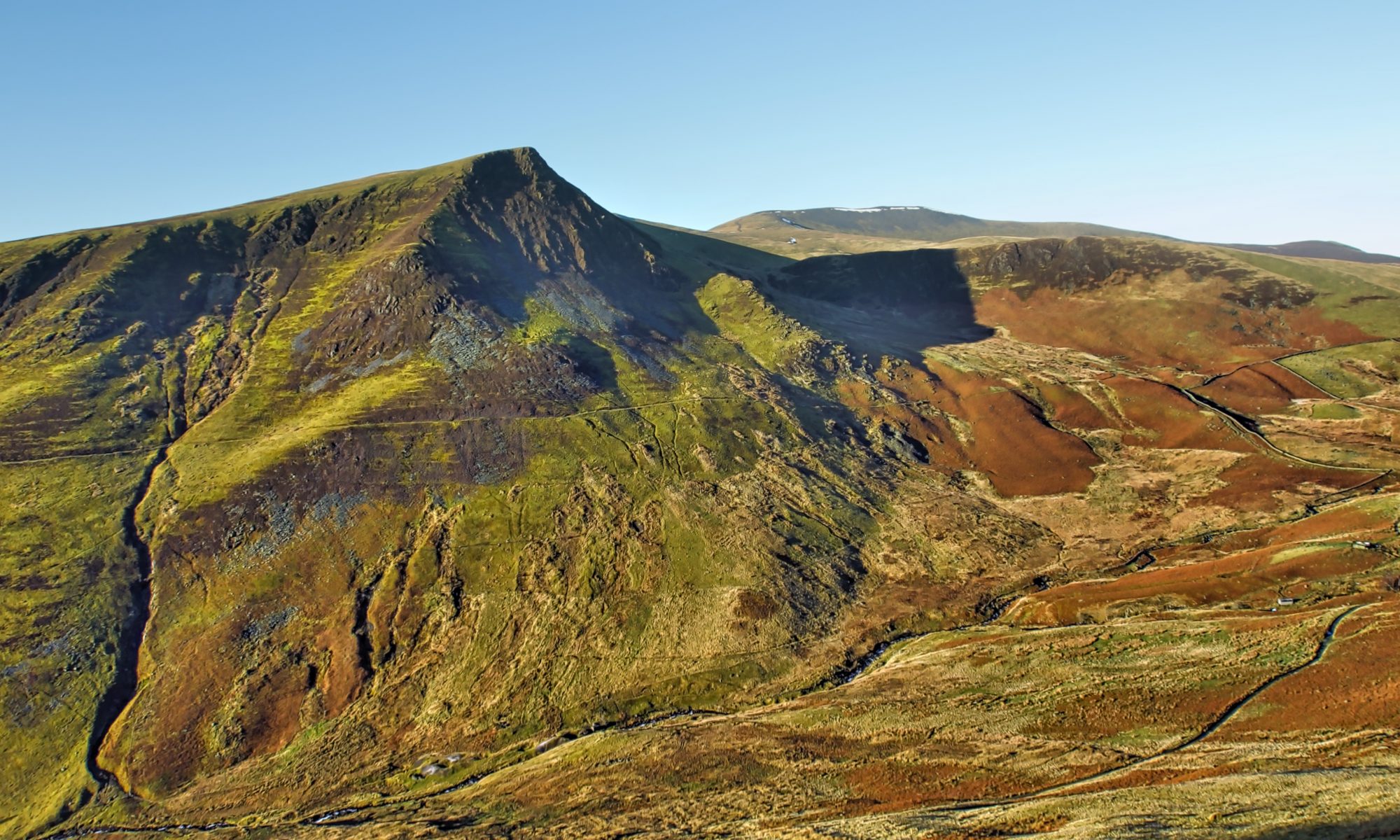 The problem with the internet it is so easy to get sidetracked. I searched for “Skiddaw” and came across a couple of proverbs listed in scans of 18th-century books courtesy of Google.

“The Critical Review: Or, Annals of Literature, Volume 46” by “A Society of GENTLEMEN” published in 1778 has this in a chapter on the “History and Antiquities of Westmorland and Cumberland”:

“Of the mountain Skidaw we are told, that ‘it is about eleven hundred yards perpendicular from the Broadwater. It rises with two heads, like ante Parnassus; and, with a kind of emulation, beholds Scruffel hill before it in Annandale in Scotland.’

That is, Skidaw and Scruffel were running a race, while our historians were writing; the latter got the start of the former, as far as Annandale; and Skidaw, ‘with a kind of emulation, beheld Scruffel before it in Annandale in Scotland.’

A word more of these two mountains.

By these two mountains, according as the misty clouds rise or fall, the people dwelling thereabouts make their prognostication of the change of the weather, and have a common expression,

If Skidaw hath a cap
Scruffel wots full well of that

Like at there goes also another saying concerning the height of this hill with two others in the kingdom,

This last extract we have given, not on account of the poetry, but of the prose. Like at there goes few passages to compare to it, except in this history.

One word more of Skidaw –

Upon the top of this mountain there is a blue slate stone, about a man’s height, which they call Skidaw man. And a little further south, upon the said mountain top, was erected in the year 1689 an house five yards square, and four yards high, by Mr John Adams the geographer, for placing his telescopes and optic glasses, having from thence a full prospect and view of these two counties, whereby he was enabled to give the better description thereof by dimensions. But he being arrested first, by his engraver for debt and not long after by death, his project proved abortive. “

The first paragraph is obviously referring to Skiddaw’s height of 931m above sea level. Broadwater is, I guess, an old name for Bassenthwaite Lake. Parnassus is a sacred mountain in central Greece, near Delphi, but the comparison is lost on me. Scruffel is, I think, Criffle, a 569m hill on the Scottish coast south of Dumfries about 30 km north of Skiddaw. So if Skiddaw becomes smothered by a cap of cloud, the prevailing wind would indicate bad weather will duly reach Criffle area.

In the second proverb, I’m guessing Lanvellin could be Helvellyn and Casticand Scafell Pike. Interesting old names for these mountains. And finally the old observatory on Skiddaw Man. Intriguing, but alas nothing is shown on the oldest Ordnance Survey maps.