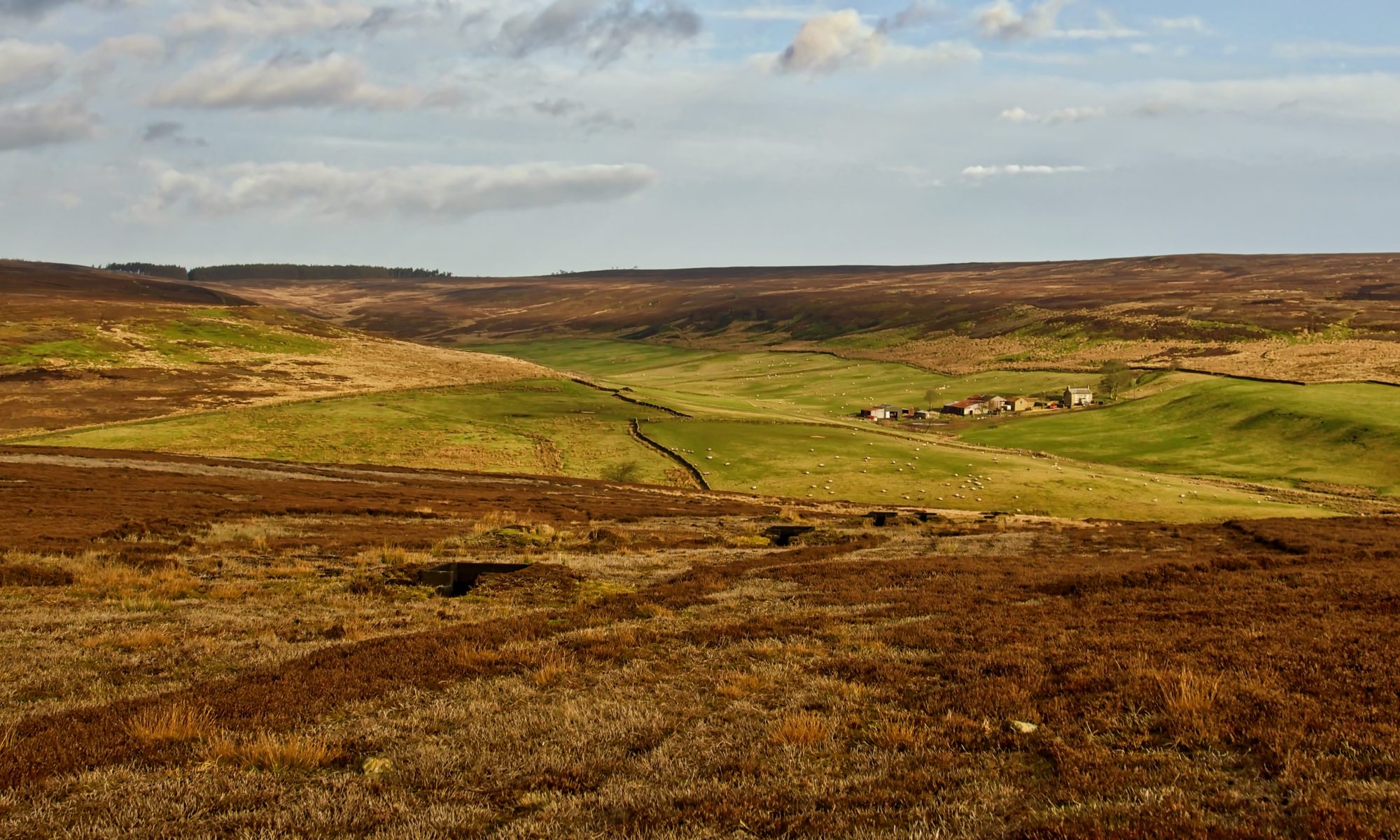 In the late 1940s, a series of articles appeared in the “Evening Gazette” describing rambles on the moors and in the Tees valley. These were very popular and were published in book form in 1949 under the title “Green Ways around Tees-Side“. The other day I found a coverless battered copy I had forgotten I had.

The book makes fascinating reading, describing routes across the moors that are still familiar today together with footpaths in the lowlands which are now lost, buried under a housing estate or blocked by the Parkway. There are also brief snippets of information about many aspects of moors life and features.

One such route, from Guisborough to Ayton, passes by the lonely farmstead at Sleddale.

“Our Cleveland Moors are unique in the variety of their attractions. On other occasions we have called attention to the striking geological formations, historic associations or magnificent stretches of valley, hill or sea.

Now we sing the praises of Cleveland character.

The vagaries of the weather, the bleakness of the moorland, the tardy charity of the soil and the isolation of many hill farms breed a combination of stern human qualities rarely found outside the covers of serious fiction.

Typical of these sturdy dales farmers is the tenant of the solitary farm house in Sleddale, Fred Proud.

A magnificent figure of a man, almost 17 stone of hard bone and muscle. Fred is a war scarred veteran of the years 1914-1918.

His big frame has been riddled with shrapnel, he has not yet rid himself of the effects of a poisoned system, but his dogged Yorkshire determination to face life boldly remains unaffected.

Neither isolation, nor the recurrent sufferings that his old wounds bring, have been able to damp Fred’s optimism or rob him or his interest in all things concerning human kind.

The multifarious events of to-day and the simpler issues o{ the past find him ever ready to offer a well pondered opinion or put a pertinent query.

Learned archaeologists from our most ancient and honoured universities have sought his help in regard to medieval and prehistoric remains in which Cleveland’s moors abound.

His opinion on boundary questions and old rights of way is respected whenever such topics are discussed.

His memory seems prodigious to townsmen who hear so much, that little seems to stick in their over-burdened minds.

But this dalesman, seeing so little, seems to see all the more thoroughly.

His life seems to link two very different periods in the economic history of the dales.

His father started work as a boy on a Yorkshire farm at the princely salary of two pounds per annum; the gift of a suit was his first rise.

But Fred’s son, by means of a grammar school scholarship, worked his way through successive examinations to a place at the Ministry of Agriculture and may well earn more per day than his grandfather received for his first year’s toil on a moorland farm.

Many hill farmers seem to possess a homing instinct that must be the envy of the aspiring walkers who find it difficult to find their way about, even without the help of the book of words and the ordnance maps.

Caught in an evening mist on the shapeless moorlands above Bilsdale, Fred could tell in some vague unaccountable way when his pony’s feet struck an old monk’s track, invisible to the eye and unknown to the modern mapmaker.

Together they found their way down to habitation and metalled roads.

His wife and family are of the same grand mould as himself.

Without them it would be impossible to wrest a living from this marginal land.

When Fred bestrides his pony and rides off for a periodic stay at the hospital, he leaves behind a self-reliant son in his middle teens who tackles the daily round with all the confidence of a born farmer.”

During the late 1970s, around this time of the year, I would take a bottle of malt to the Prouds at Sleddale in recognition of them allowing the Guisborough Moors Race to run through their farmyard. (No Public Right of Way exists through the farm.) I seem to remember two brothers so maybe the elder one had returned to the farm after his time at the Ministry of Agriculture.
 Open Space Web-Map builder Code