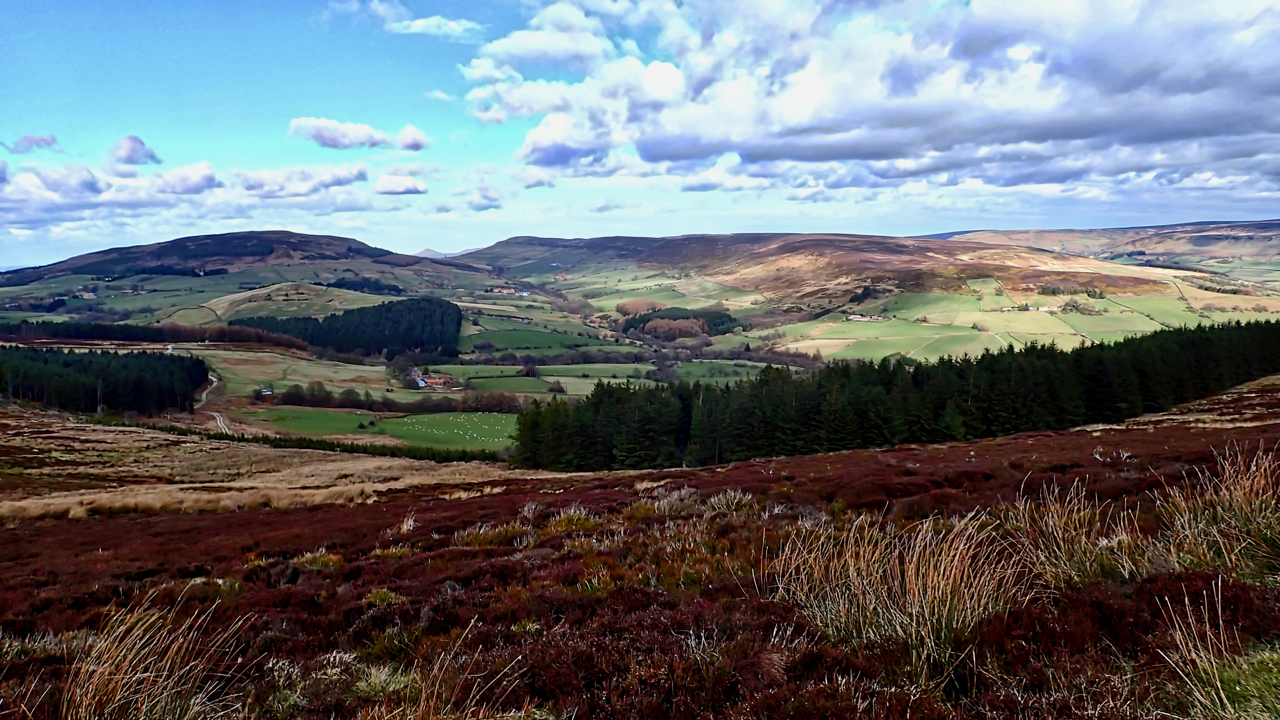 “What is this life if, full of care,
We have no time to stand and stare.”

So wrote the Welsh poet W. H. Davies. I didn’t have much time to stand and stare today. Too much of a hurry. The Bilsdale Fell Race for me but managed to snatch this snap towards the end. It’s from Barker’s Ridge climbing up Noon Hill. Another name on the Victorian map is Benky Hill. I like that. Ahead is the col between Cringle Moor and Cold Moor above the eastern arm of Raisdale. The col doesn’t appear to have a name which is rather surprising as it was a major medieval route connecting Rievaulx Abbey with the River Tees. Rievaulx had monastic granges at Normanby and Broughton supplying the needs of the abbey, salt and fish were obtained from the villages about the Tees estuary and along the coast. The route would have been well used by teams of up to forty packhorses, the juggernauts of their day.

And of course, today is St Patrick’s feast day, the supposed date of the saint’s death. A date associated with an improvement in the weather. We hope. It’s also a day for ‘drowning the shamrock’ which is often taken as drinking excessively. but actually, it’s a drinking custom: ‘The men “drown” the shamrock in a glass of whiskey. They dip the shamrock into the spirit and then they drink it’.

St Patrick himself liked his tipple as told in this story:

“Once upon a time when Saint Patrick was touring Ireland he went into a public-house for a drink. The lady had the habit of not filling the glass when the froth came to the top. She got the drink in a fine pot. Patrick liked the pot, and told her to fill the glass in future. There was a fine black dog near the counter, and Patrick inquired where he came from.
“I do not know.” said the landlady, “but he came here a short time ago.”
Patrick told her he would call again in four months’ time.
He did call again in six months, and this time inquired “Where is the dog?”
“He has gone away,” said she, “and he was so thin and weak that he was hardly able to walk.”
Patrick then told her that the dog was the Devil, and that he used to drink as much porter as would fill each glass and that he was forced to leave when he had nothing to drink.
The pot is known ever since as St Patrick’s Pot.”

It is said that St Patrick will look favourably on the person who drinks in his honour, since he has the last say in the fate of the Irish on the Last Day hence the salutation “Saint Patrick’s Pot he’ll forget us not”.
 Open Space Web-Map builder Code

2 Replies to “Back of the Cleveland Hills”