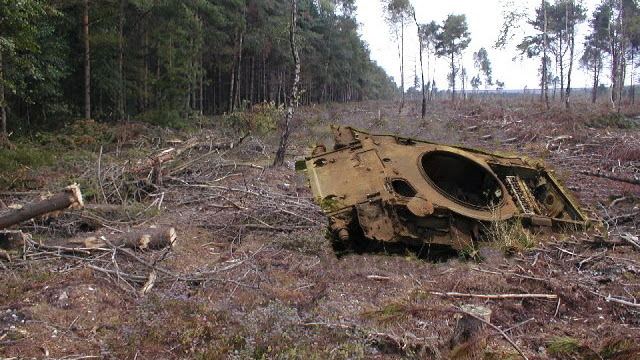 A windy day, with snow showers.

Fair Lady’s Pool would have once a significant feature on Rievaulx Moor but has been hidden for decades within a plantation of spruce trees. Recent clear felling has opened up the pond and exposed nearby the wreck of a military vehicle. It looks like a tank to me and is probably a Valentine tank used by the 11th Armoured Division which was stationed at Duncombe Park near Helmsley during the Second World War and which used these moors extensively for training the crews using Valentine tanks.

The 11th Armoured Division was raised in 1941 as a direct response of the success of the German Panzer division. It was to play a key role in many Allied victories in Europe. The Imperial War Museum has an interesting photo of Winston Churchill inspecting the Division’s Valentine tanks and crews at Duncombe Park in November 1941. To view click on this link to the Helmsley Archive.