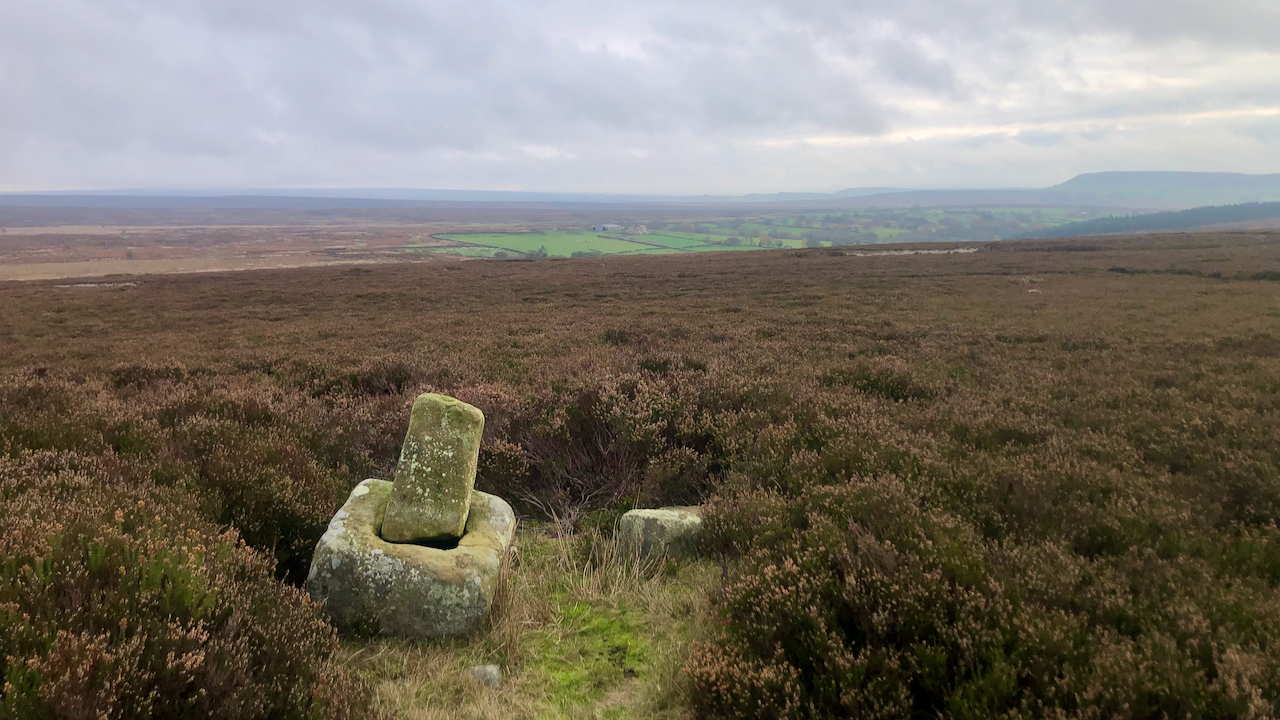 Had a wander around Roppa Moor, north of Helmsley.

This is actually the northernmost of the remains of two wayside crosses (360m apart) that located alongside the supposed medieval ‘pæth‘ that ran south from the junction of Haggesgate and Thurkisti to Helmsley.

A pæth is a upland ‘path or track’ over moorland2COLE, ANN. ‘THE PLACE-NAME EVIDENCE FOR A ROUTEWAY NETWORK IN EARLY MEDIEVAL ENGLAND ‘. (IN TWO VOLUMES). PAGE 37. KELLOGG COLLEGE UNIVERSITY OF OXFORD 2010. They were supposedly routes used by monks as part of their supply network. The Public Footpath follows the line of a shallow holloway, perhaps evidence of the medieval pæth.

More interesting though is the two nearby Bronze Age round barrows 330m away on the highest point of the moor3‘Heritage Gateway – Results’. 2012. Heritagegateway.org.uk <https://www.heritagegateway.org.uk/Gateway/Results_Single.aspx?uid=55900f4c-3478-437e-943d-1148eece311f&resourceID=19191> [accessed 12 November 2022]. One has a large 3m menhir lying prone, the other, an interesting depression but the result of archaeological excavation.

In 1895, Roppa Moor was the scene of an horrific murder. The bodies of Kate Hudson and her infant child, Heseltine, were found together under a clump of trees in a hole covered by a thin layer of soil. Both had had their throats cut with a carving knife; the injuries on Mrs Hudson’s hands suggested she had struggled with the knife.

It’s hard to imagine where the spot could have been. Roppa Moor is bleak and remote, largely treeless, and not crossed by modern tarmac roads. The hole had been spotted earlier by a “road-mender”4‘A Yorkshire Tragedy. | Coventry Evening Telegraph | Monday 17 June 1895 | British Newspaper Archive’. 2022. Britishnewspaperarchive.co.uk <https://www.britishnewspaperarchive.co.uk/viewer/bl/0000337/18950617/018/0003> [accessed 12 November 2022]. Perhaps he was mending one of the several estate tracks. Or the spot was further south closer to Helmsley Bank.

The suspicion immediately fell on Kate’s husband, Robert Heseltine Hudson, who had grown up locally but with his parents had moved to Darlington. Hudson was employed as a house furnisher’s assistant and had worked in Liverpool, Sheffield and Nottingham. In May 1895, the family moved to Helmsley lodging in a house on Bondgate.

Hudson took his family out for walks on the moors although it was reported that his wife had complained that the places they visited were lonely.

On 8 June, Hudson returned but his wife and child did not, telling his landlady that they had gone to visit an aunt in Hovingham. Hudson then caught the train to York and disappeared, arousing suspicions which prompted a search when the bodies were discovered.

Hudson was tracked down to Birmingham, arrested, and brought back to Helmsley. The evidence was pretty overwhelming and he was committed for trial at York Crown Court.

It turned out that Hudson had bought a spade in Helmsley and had been seen cycling about with it tied to his bicycle. The spade was later found on Roppa Moor. Various other people identified him as a man they had seen acting suspiciously on and around Roppa Moor. Soon after the ‘disappearance’ of his wife, Hudson advertised for a new wife “Bachelor, tall, dark, age 27, wishes to meet with lady of some means, with a view to early marriage”. There was also a pocket book in which Hudson had written on 15 June – “One week from the saddest event in my life, at ten to one o’clock, and I am living yet”. The jury took just 6 minutes. He was found guilty and was hanged at York Castle on 13 August 18955‘Roper Moor Tragedy. | Yorkshire Gazette | Saturday 27 July 1895 | British Newspaper Archive’. 2022. Britishnewspaperarchive.co.uk <https://www.britishnewspaperarchive.co.uk/viewer/bl/0000266/18950727/073/0006> [accessed 12 November 2022].

Hudson never directly confess to the murders, blaming bad company for his predicament and expressed repentance.