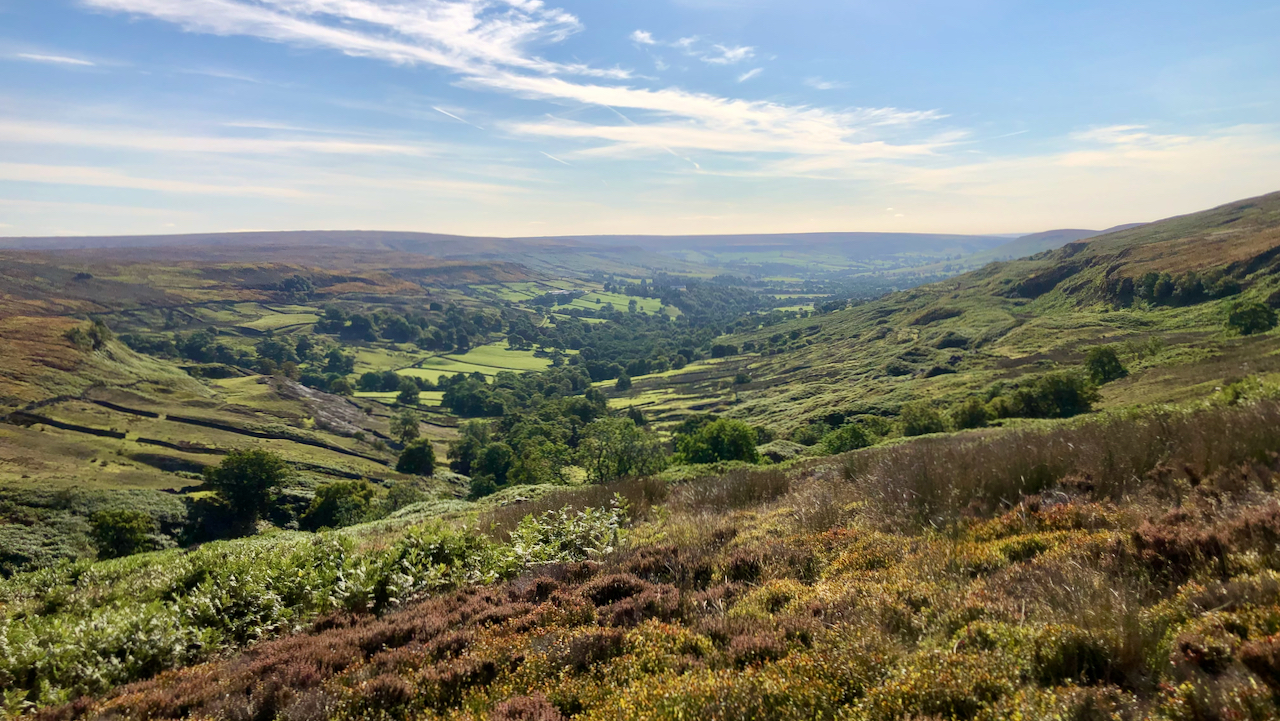 I realised the other day that I don’t know upper Farndale at all. I’ve skirted around the skyline on the Rudland Rigg or the track of the old mineral railway to Rosedale many, many times. I do remember crossing the dale once in the Cleveland Survival Race. But I can’t say I’ve ever been to the head of the dale.

It’s the home of the Farndale Hob.

There are many tales of hobs in the folklore of the North York Moors. Those irritating goblins or little people whose presence has been enshrined in moorland placenames: Hob Hole, Hob Cross, Hob on the Hill.

The Farndale Hob is the most famous of them all. Canon Atkinson in his book “Forty years in a moorland parish” wrote that this hob was so “familiar and troublesome a visitor of one of the farmers of the dale, and caused him so much vexation and petty loss, that he resolved to quit his house in Farndale and seek some other home. Early in the morning, as he was on his way, with his household goods in a cart, a neighbour meeting him said, ‘ Ah sees thou’s flitting.’ — ‘Ay,’ cries Hob out of the churn, ‘ay, we’se flittin’.’ On which the farmer, concluding that change of abode would not rid him of his troublesome inmate, turned his horse’s head homeward again.“1Atkinson, Rev. J. C. “Forty years in a moorland parish; reminiscences and researches in Danby in Cleveland” 1891

Jonathan’s grandfather had had a servant, Ralph, who was a stout and lusty fellow, but who was unfortunately frozen to death in a wreath of snow whilst returning from the fair. Some little time after the death of the luckless Ralph a visitor of an uncommon kind appeared in the house of his master. One of the family who happened to be awake at midnight heard the thump of a flail in the barn; the whole house was awakened, and all were of the opinion that it was no mortal thresher. Night after night this strange visitor worked on the farm, doing the work of a dozen men. The farmer, feeling that some recompense was due to one who worked so hard, ordered that a jug of cream and other viands should be placed in the barn nightly.

On the death of the old man. Ralph passed, together with the stock and crop, to the next in succession, and from him to Jonathan. Jonathan married a wife who thought well of and was kind to the nightly visitor, but she died, and Jonathan married again. His second partner was a woman of a saving disposition. She grudged the viands set nightly in the barn, and in spite of her husband, put skimmed milk out in the place of cream. From that day forward not a jot of work would the visitor do. Moreover, not only did bad luck come upon all the household, but strange noises were heard at dead of night, kettles were turned into drums, pewter plates into cymbals, bed-clothes were pulled off, and the bed lifted up, and then succeeded a concert of knockings, greenings, scratchings, hissings, bowlings, drummings, thumpings. that no rest whatever could be had in the house. The unlucky pair endured these torments for some time until last they resolved to seek another abode.

Accordingly, having taken a farm at some distance. Jonathan began the removal of his property. He had just set out from his old habitation with the last cartload of his household goods and farming utensils, when he was met by an old acquaintance. “Heigh. Jonathan, what are about?” “We are flitting.” he replied with a sigh. “Yes,” said a strange voice close by “we are flitting.” The pair stared the pile of odds and ends, and to their they saw an awful looking figure seated in an old churn—a figure with tremendous eyes, which seemed to dance with malicious glee. Jonathan surveyed him with mixture of fear and vexation, and exclaimed, “If thou art flitting, we’ll e’en flit back again.”

The story is not unique to Farndale. Alfred Lord Tennyson’s 1842 poem ‘Walking to the Mail‘ bears a remarkable similarity although the supernatural rascal here is a ghost3‘Walking to the Mail.’ | Railway Bell and London Advertiser | Saturday 01 August 1846 | British Newspaper Archive’. 2022. Britishnewspaperarchive.co.uk <https://www.britishnewspaperarchive.co.uk/viewer/bl/0002999/18460801/024/0003> [accessed 17 September 2022]:

You saw the man but yesterday:
He pick’d the pebble from your horse’s foot.
His house was haunted by a jolly ghost
That rummaged like a rat.
No servant staid:
The farmer, vext, packs up his beds and chairs,
And all his household stuff; and with his boy
Betwixt his knees, his wife upon the tilt,
Sets forth, and meets a friend who hails him, “What!
You’re flitting!” ” Yes, we’re flitting,” says the ghost,
(For they had pack’d the thing among the beds),
“Oh well,” says he, “you flitting with us too—
Jack, turn the horses’ heads and home again.”