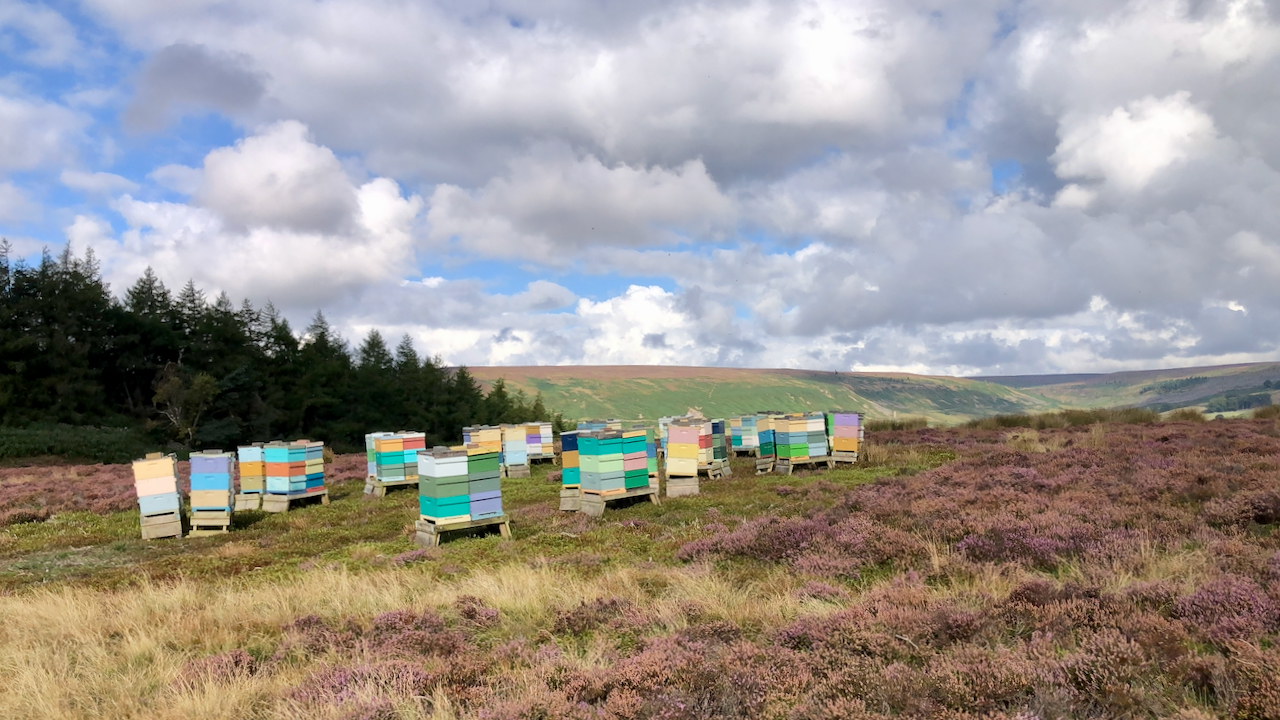 THIS may be called a Bee country;— especially the Morelands, and the northern margin of the Vale ; where great numbers of bees have been usually kept, and great quantities of honey collected ; chiefly from the flowers of the heath, which afford an abundant supply ; but the produce is of an inferior quality; brown and strongly flavored1Marshall, William. “The Rural Economy of Yorkshire: Compromising the Management of Landed Estates and the Present Practice of Husbandry in the Agricultural Districts of that County”. United Kingdom, G. Nicol, 1796..

So wrote William Marshall at the end of the 18th-century. It reads like he didn’t like heather honey, nowadays it is very popular and earns a premium.

The annual transportation of hundreds of hives onto the heather moorlands takes place from early August to the end of September. It’s not only local beekeepers that take advantage of the flowering ling but many hives are brought in from quite a distance.

One thing I didn’t appreciate is that when working heather, bees can become particularly vicious and their stings more painful than usual. Perhaps they haven’t settled after being moved; or perhaps they realize that the nectar gathering season is drawing closer and a need to replenish their winter fuel2Hartley, Marie and Joan Ingilby. “Life and Tradition on The Moorlands of North-East Yorkshire”. Page 90. J.M. Dent & Son. 1972. ISBN 1 870071 54 9.. Two members of our party were stung when walking past these bee hives today.

I am not sure if there is any significance for the colour scheme, but it’s certainly asthetically pleasing.

Bees appear in many of Shakespeare’s works, take this poem for example4‘The Kingdom of the Bees: William Shakespeare’. 2022. Blogspot.com <http://poetrysummary.blogspot.com/2017/07/the-kingdom-of-bees-william-shakespeare.html> [accessed 1 September 2022]:

The Kingdom of the Bees

So work the honey-bees :
Creatures that, by a rule in Nature, teach
The art of order to a peopled kingdom
They have a king, and officers of sorts;
Where some, like magistrates, correct at home;
Others, like merchants, venture trade abroad;
Others, like soldiers, armed in their stings,
Make boot upon the Summer’s velvet buds;
Which pillage they with merry march bring home
To the tent-royal of their emperor;
Who, busied in his majesty, surveys
The singing masons building roofs of gold;
The civil citizens kneading-up the honey;
The poor mechanic porters crowding-in
Their heavy burdens at his narrow gate;
The sad-eyed justice, with his surly hum,
Delivering o’er to executors pale
The lazy yawning drone.

One Reply to “‘THIS may be called a Bee country’”