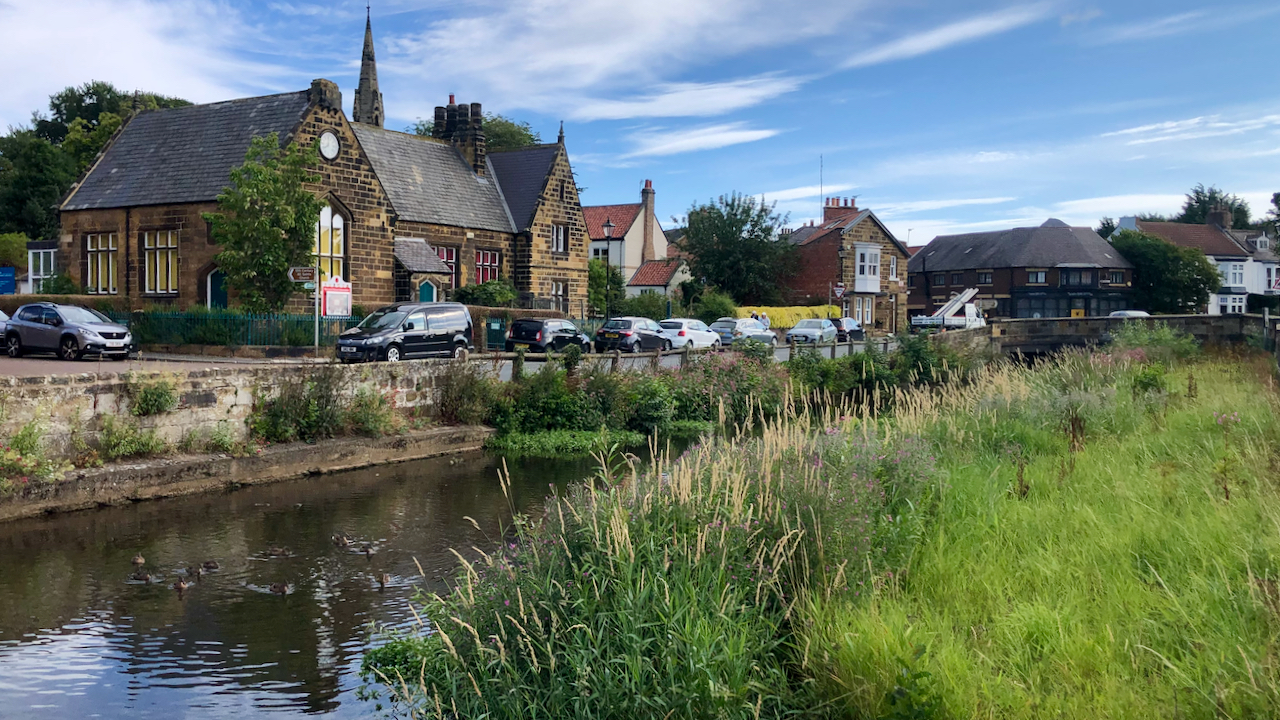 A tranquil River Leven as it flows through Great Ayton below the stone bridge.

The edifice on the left is the Marwood primary school which opened in 1851 when the Postgate school closed up the top end of the village. It was endowed by the Rev. George Marwood, a major landowner in the village whose ‘seat’ was Busby Hall1The British and Marwood Schools (Part of a Chapter from ‘Great Ayton -A History of the Village by Dan O’Sullivan’). [n.d.]. <http://greatayton.wdfiles.com/local–files/schools/The-British-and-Marwood-Schools.pdf> [accessed 5 August 2022]. This entailed paying for the salaries of the teachers, seemingly very generous but he was also entitled to receive the tithes amounting to one-tenth of all the crops produced in the parish on his land formerly belonging to Whitby Abbey.

There is no doubt that the Marwoods were very influential, Lords of the Wapentake of Langbarugh, and able to trace their family back at least to Edward Marwood de Nunthorpe who died in 1557. However the line neatly did a side step when Jane Turner was disinherited because she ran off with a Dutch officer who had been billeted with her family at Kirkleatham during the 1743 Jacobite rebellion2Jane’s mother was a Jane Marwood who had married Cholmley Turner of Kirkleatham.. Instead the estate was left to William Metcalfe, Jane’s 3rd cousin, provided he changed his name to Marwood — well, you would, wouldn’t you?

Such is the price of love.

As Lord of the Wapentake of Langbarugh, the Rev. George Marwood was aware of and very assertive of his rights. He tried to grab even more land when the Tees Navigation Company cut a channel in 1810 removing a massive meander in the River Tees. The case is very complicated and I can not hope to improve on the explanation by John Fairfax-Blakeborough3Blakeborough, J. Fairfax. “Life in a Yorkshire Village”. 1912. Page 55.:

In March 1841, there was a curious law-suit tried at York between the Rev. George Marwood and the Earl of Harewood and others. It arose in this way. In 1207 King John had granted to Peter de Brus, tor a substantial consideration, the Wapentake of Langbarugh with its appurtenances. There was, however, no definition of the latter very comprehensive term, but neither was there limitation and the successive owners of the franchise developed it not a little so that when in the reign of James I the crown lawyers combatted certain rights, they were unsuccessful. By hereditary right the grant eventually came to the Rev. George Marwood of Busby Hall, and he endeavoured to make it include to the grantee the Crowns undoubted property in so much of the soil of the Wapentake as was covered at high water by ordinary spring tides, and therefore that when from any cause the tide ceased to flow over any portion of it, which thereby became reclaimed land, such land belonged to him as Lord of the Wapentake and not to the owner of the adjoining ancient lands. Now when the Tees Navigation Company cut the new channel in 1810, they did not close the old one, and the tide continued to flow through it until, in 1829, the operations of the Stockton and Darlington Railway Co., closed it at one end, and so much of the old channel as adjoined Lord Harewood’s land gradually dried. By the time of the trial, it had become perfectly dry and Lord Harewood’s tenant had occupied it. Mr. Marwood now set up a claim to the Yorkshire half of it, for the Wapentake only extended to midstream ; all beyond that belonged to the County of Durham, and therefore to the Bishop as Prince Palatine. He failed, however, to establish his claim, though the judge in his summing up said : “It appears to me that it is shown Mr Marwood has in him the rights, whatever they were, that belonged to the person he is lineally descended from. No question has been made on the past of the defendants about that, and, therefore, I will not trouble you with the deed, …. which only went to show steps in the pedigree, and to identify the Rev. Mr. Marwood of the reign of Queen Victoria, with the Lord de Bruce of the reign of King John. We will take it that if Lord de Bruce had lived until this time he would have stood in Mr. Marwood’s situation.”