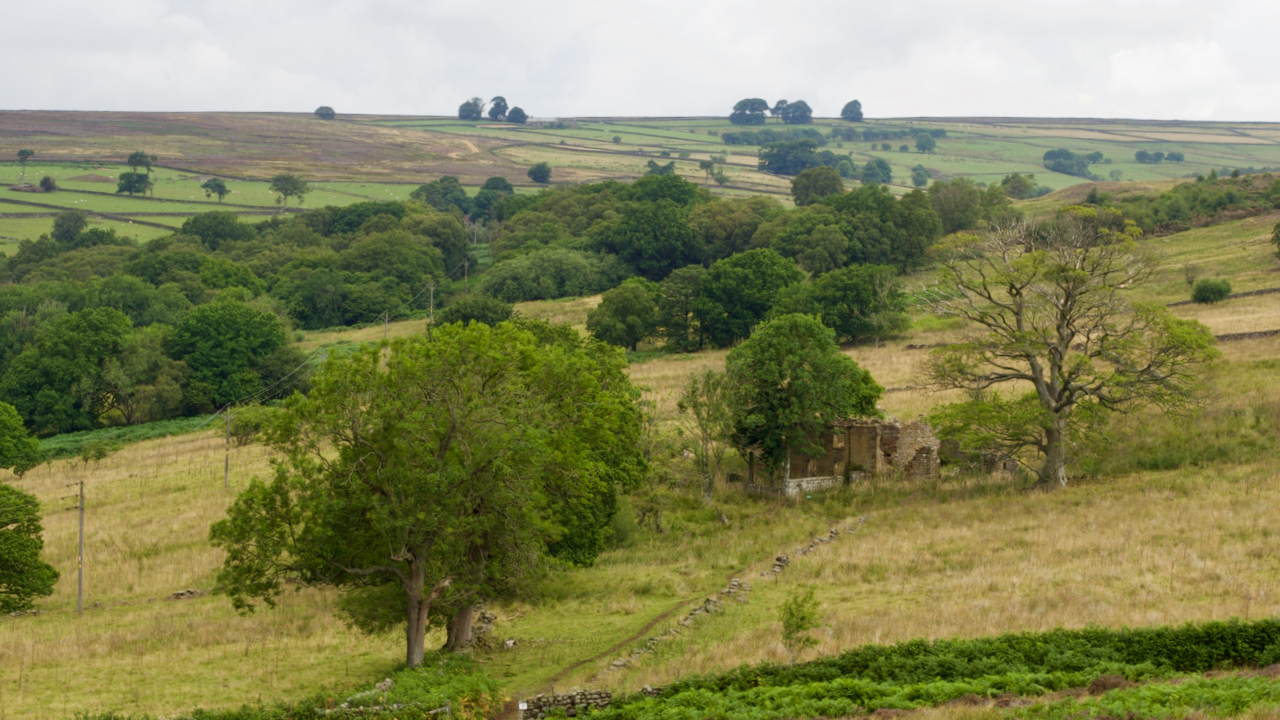 That’s Bumper Castle in the photo, right of centre. It seems to have grown more forlorn since the last time my last visit. A Grade II listed building, it’s described as a mid-18th-century house1‘HER Map: North York Moors National Park’. HER No: 1311. <https://www.northyorkmoors.org.uk/discover/archaeology/her-map> [accessed 29 July 2022]. But listing a building only prevents demolition or alteration, it doesn’t protect it from reclaiming by nature.

Local tradition asserts that Bumper Castle was built as a shooting lodge by John Manners, 3rd Duke of Rutland — the Easterside estate having been retained by the Earl of Rutland when Bilsdale was sold in 1695 to Sir Charles Duncombe whose family became the Earls of Feversham. It was certainly well built with a slate roof and a date of 1722  on the gable end2Cowley, Bill. “Snilesworth”. Turker Books. Pages 96/101. 1993..

Another story, widely reported in the early 20th-century, was that the unscrupulous George Villiers, the 2nd Duke of Buckingham, stayed at Bumper Castle, “a house of one of his largest tenants — a better class farm” and that shortly before he died he presented “his host” with a pair of silver spurs which were apparently still in the family in 19043“England’s First M.F.H. Interesting Yorkshire Relics” | Yorkshire Post and Leeds Intelligencer | Thursday 08 September 1904 | British Newspaper Archive. 2022. Britishnewspaperarchive.co.uk <https://www.britishnewspaperarchive.co.uk/viewer/bl/0000687/19040908/213/0012> [accessed 29 July 2022].

The 2nd Duke of Buckingham has been described as “Courteous, affable, generous, magnanimous…he is adored by the people….On the other hand he is an atheist, blasphemer, violent, cruel and infamous for his licentiousness, in which he is so wrapped up that there is no sex, nor age, nor condition of persons who are spared from it“4Wikipedia Contributors. 2022. ‘George Villiers, 2nd Duke of Buckingham’, Wikipedia (Wikimedia Foundation) <https://en.wikipedia.org/wiki/George_Villiers,_2nd_Duke_of_Buckingham#cite_ref-FOOTNOTEMiddleton198047%E2%80%9348_17-0> [accessed 29 July 2022].

But the Duke’s morals are not really relevant here, rather the fact that he died in 1687, when Bumper Castle had not been built and was not owned by him.

So the stories don’t quite stack up.

More reliable facts can be found in the census returns. In 1851, it was certainly in use as a farmhouse, and occupied by Richard Hilbert farming 127 acres. Three decades later, Thomas Wrathall was there, and again in 1891. In 1920, Mrs Clark, widow of Noah Clark, was paying rent of £255Cowley, Bill. “Snilesworth”. Turker Books. Page 101. 1993..

There is another local tradition which says that the monks of Rievaulx Abbey wrought iron on Bumper Moor. Evidence of slag in the dale gives some credence to this story6Burns, Tom Scott. “The Walker’s Guide to the Cleveland Hills”. Pages 118/9. 1993. Smith Settle. ISBN 1-85825-009-9..