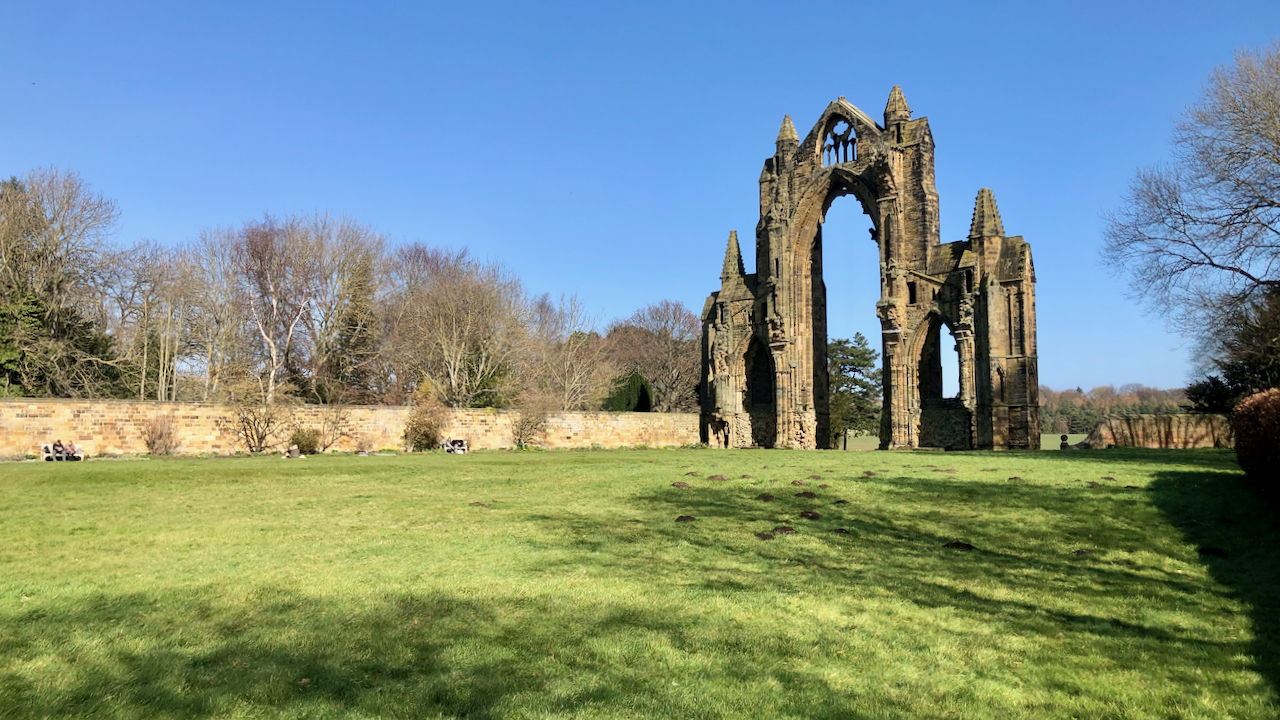 Called in at Gisborough Priory to look at the ruins that are dominated by the iconic east window.

It took a while to frame this view, the grounds were swarming with students from the sixth-form college. It was good to see so many young people relaxing and enjoying their surroundings.

But I wonder if those young people gave any thought about treasure that is supposed to lie beneath their feet.

Gisborough Priory was of course dissolved on the orders of King Henry VIII1Historicengland.org.uk. (2012). Gisborough Priory Augustinian monastery: late Saxon settlement, cemetery, monastic precinct and dovecote, Guisborough – 1007506 | Historic England. [online] Available at: https://historicengland.org.uk/listing/the-list/list-entry/1007506?section=official-list-entry [Accessed 18 Mar. 2022].. The King’s Commissioners came and stripped the priory of all its assets and salvageable materials such as lead from the roofs. Overtime the townsfolk completed the ransacking.

But rumours prevail that many abbots and priests had an inkling of an impending confiscation of their treasures and hid them before the Commissioners arrived. There are cases, especially in village churches, of objects like altar silverware or statues coming to light centuries after being hidden.

Peter N. Walker recounts in his book ‘Folk Tales from the North York Moors’, the legend of a tunnel leading from the Priory along which is hidden such treasures.

However, one man, a cobbler called Crispin Tocketts decided to try his luck. He found the entrance and, marking his route with a ball of wool, he started along the tunnel by candlelight. In time he came across a massive oak chest. Inside there were gold and silver coins, chalices and plates made of gold, and a gold mitre glittering with precious stones. But suddenly a huge black raven appeared and turned into the Devil himself, fiery and terrifying.

Crispin dropped his candle and ran for all his life, stumbling in the dark. He eventually emerged into fresh air, a quivering wreck.  It would be many years before he spoke of his ordeal.

And no-one has tried to find the treasure ever since.