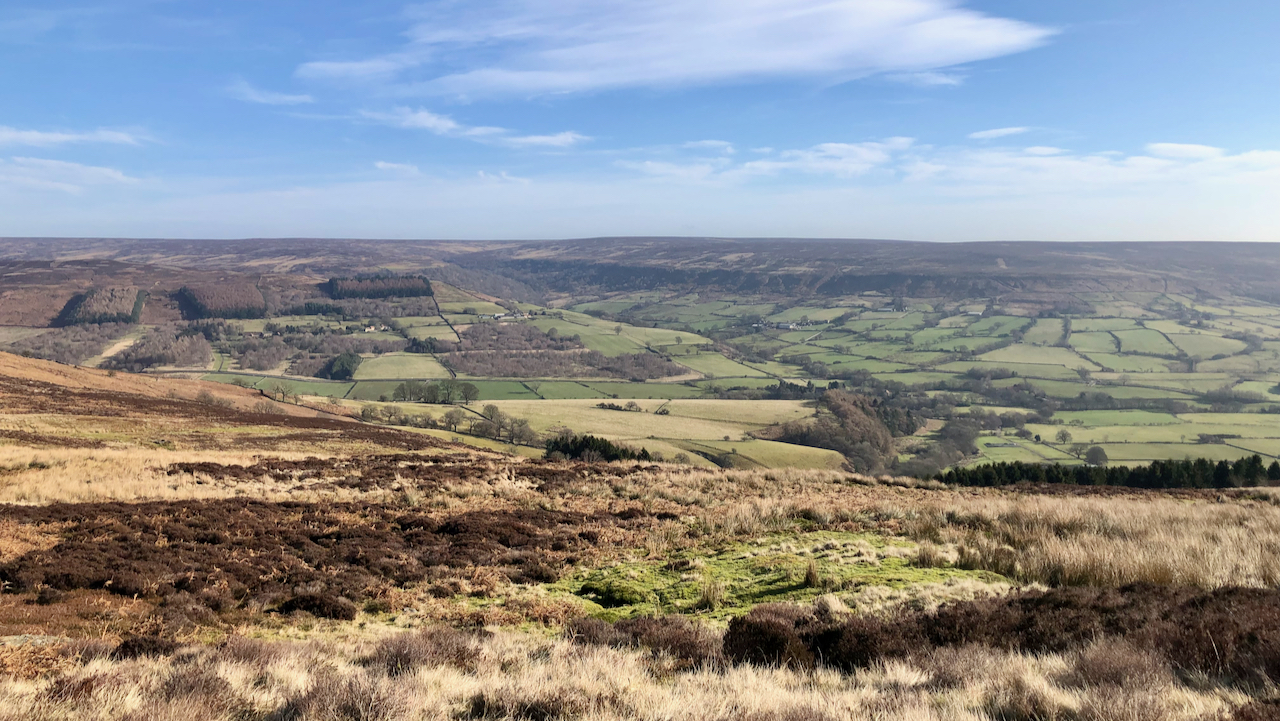 Had a trot up to the Bilsdale transmitter to see how the new mast was getting along. As its going to take 19 months, I shouldn’t have expected to see anything1News, B. (2022). Bilsdale transmitter: Work on replacement expected to start soon. [online] BBC News. Available at: https://www.bbc.co.uk/news/uk-england-york-north-yorkshire-60445095 [Accessed 26 Feb. 2022].. There was just one bloke high up the temporary mast. What a view on a vernal morning.

The view was maybe not quite as good from ground level but still impressive.

Across the dale, the ‘secret’ valley of Tarn Hole

dominates the far skyline. Secret because no Public Rights of Way pass through it and although the moorland above is Open Access, there are no well trod paths around the escarpment.

George Villiers, the 2nd Duke of Buckingham, was out hunting in Tarn Hole in 1687, when he fell, striking his head on a rock2Hudson, Martyn. “on blackamoor”. 2020. ISBN 978-1-9164257-9-8. He was taken to the house of a tenant in Kirkbymoorside, where he caught a chill and died3Wikipedia Contributors (2022). George Villiers, 2nd Duke of Buckingham. [online] Wikipedia. Available at: https://en.wikipedia.org/wiki/George_Villiers,_2nd_Duke_of_Buckingham#Retirement [Accessed 26 Feb. 2022].. The rock on which he struck his head is known as the ‘Buckingham Stone’ but it’s not on Open Access Land and the land owner is quite protective so I won’t disclose exactly where it is.

Tarn Hole was the home of one of the moors many hobs, ‘T’Hob o’ Tarn Hole’, those mischievous mercurial elves that attach themselves to a farmstead4Home, Gordon. “The Evolution of an English Town – Being the story of the ancient town of PICKERING in Yorkshire from Prehistoric times up to the year of our Lord Nineteen Hundred & 5”. Page 87. 1905. Available online at https://www.gutenberg.org/files/15053/15053-h/15053-h.htm. But I prefer to think he lived in the delightfully named Ash Nuiken

, the woodland that bestrides the beck.

up to the moor and along to Tarn Hole Crag. I must explore this sometime.

Until very recently all the Public Rights of way through Apple Tree Hurst Farm were closed due to an “ongoing police” investigation. Apparently human body parts had been found there.

The story began in 2011 when police found a loaded Luger pistol under the owner’s pillow and a ‘museum’ in an outbuilding containing a military memorabilia a vast collection of machine guns, grenades, mortars and ammunition including the cockpit from a fighter jet5Hunter, N. (2011). Fanatic kept gun under his pillow. [online] The Northern Echo. Available at: https://www.thenorthernecho.co.uk/news/ 9412750.fanatic-kept-gun-pillow/ [Accessed 3 Feb. 2022]..

The police had been following up a case of exposure by the owner, a Ken Ward, to a neighbour. If you want photographs and all the titillating details you best read the Daily Mail article6Newman, J. (2022). Bones found on property of convicted naked stalker are identified as WWII airmen. [online] Mail Online. Available at: https:// www.dailymail.co.uk/news/article-10473723/Bones-property-convicted- naked-stalker-identified-WWII-airmen.html [Accessed 3 Feb. 2022]..

Along with the guns, grenades, and pieces of aircraft wreckage, the Police found human remains. These have been identified as belonging to the pilot and navigator of a Mosquito plane, No. DZ543, which crashed on the moors above Bransdale on 11th October 1944. It was on a transit flight from Beccles to Turnberry airfield and hit the moor in low visibility7Yorkshire-aircraft.co.uk. (2022). Mosquito DZ543. [online] Available at: http://www.yorkshire-aircraft.co.uk/aircraft/planes/44/dz543.html [Accessed 3 Feb. 2022]..

But it seems that not all the body parts were recovered by the RAF at the time, and Ward, who had had an obsession with the crash since 1959, when aged 11, had carried out his own excavations to recover further pieces of aircraft for his collection and in doing also found human remains which the RAF had missed.

In their article the Daily Mail reports that “Police say they have now concluded their investigation without any further charges being brought against Ward“8Newman, J. (2022). Bones found on property of convicted naked stalker are identified as WWII airmen. [online] Mail Online. Available at: https:// www.dailymail.co.uk/news/article-10473723/Bones-property-convicted- naked-stalker-identified-WWII-airmen.html [Accessed 3 Feb. 2022].