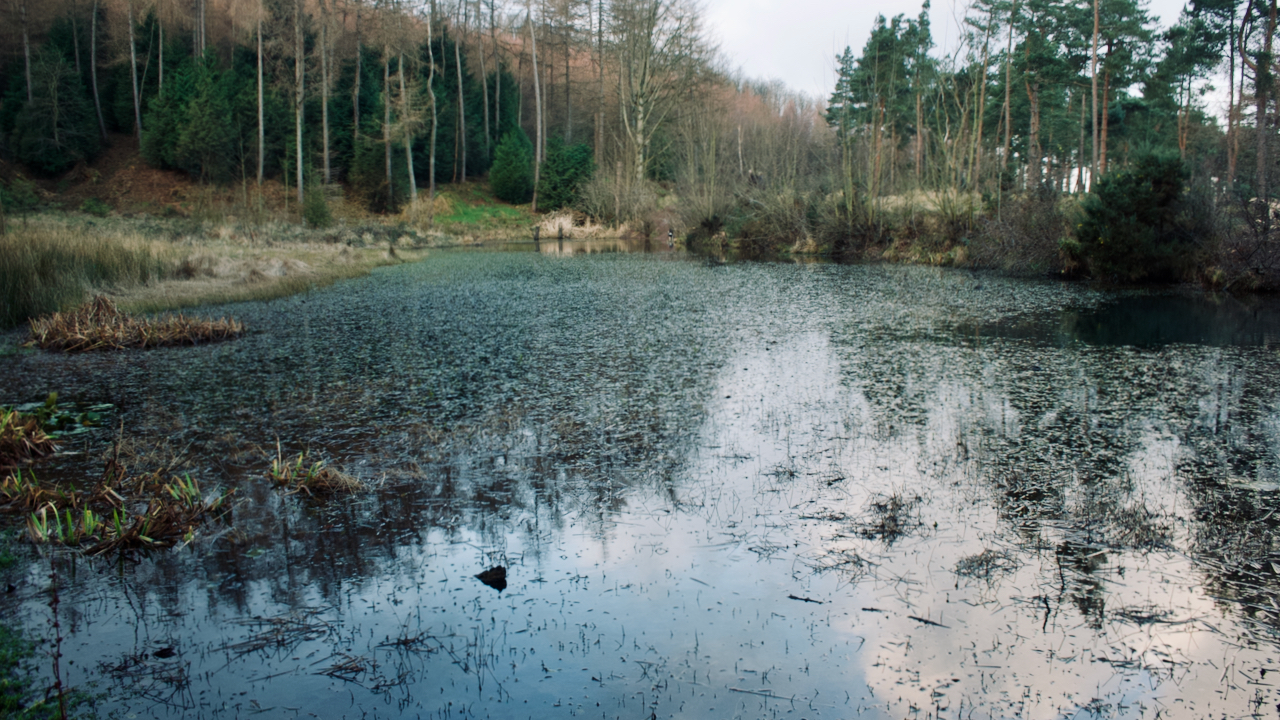 To be clear this is the old mine, which operated between 1855 and 1877, and not the new one which was sited a kilometre further west and which operated in the first half of the 20th-century1Chapman, Simon. “Guisborough District Mines”. Pages 6-25. Cleveland Ironstone Series. 2001..

Perhaps there is something drowned at the bottom of this pond, constructed as a fire water supply during the planting of the forestry. It has various local names: Blue Lagoon, Yellow Lake. Contradictory hues, but quite often with a orangey tinge due to the iron salts permeating from the mine.

The three drift entrances were on the far side above the water level but have been largely obliterated by the forestry planting. Below the access road to the right was more productive, where there were plenty of lumps and bumps associated with the calcining grounds and earthworks for the narrow gauge railway which took the stone down to the main line at Guisborough. From there it was transported to furnaces at Tow Law and Tudhoe in County Durham.

Between 400 and 500 men were employed at the old Belmont Mine at its peak. These contributed to the rapid growth of Guisborough during this period. In the 1851 census, its population was 2,062; by 1881, it was over 6,6003“Guisborough Before 1900”. Edited by B.J.D. Harrison and G. Dixon. Page 167. 1982. ISBN 0 9507827 0 X.. Ironstone mining attracted men seeking work from all over the country. A glimpse of these migrations is revealed by a newspaper report. Sadly on this occasion in 1875, George Howlett, originally from Norfolk, was fatally injured by a rockfall at Belmont Mine4Chapman, Simon. “Guisborough District Mines”. Page 18. Cleveland Ironstone Series. 2001.. He did later from lockjaw at the Cottage Hospital in Guisborough.

I wonder what the history is behind Howlett’s move to Guisborough.