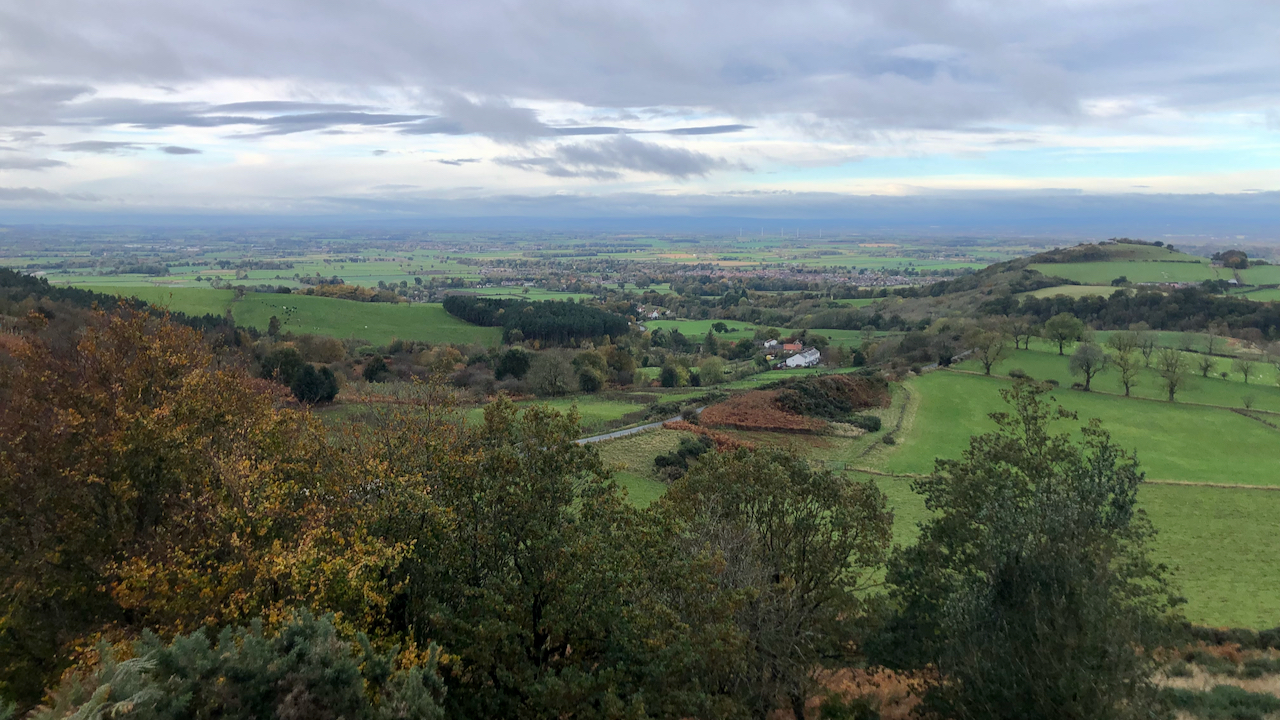 I’ve never really figured out where Gribdale begins and where it ends. There is no dale as such.  The col between Capt. Cook’s Monument and Great Ayton Moor is known as Gribdale Gate. Beyond that, we’re into Lonsdale, so Gribdale must lie this side. But there is no valley. A stream does spring out from below Hunter’s Scar (300m south of the col) flowing below Gribdale Terrace; that’s the row of white cottages right of centre.

Gribdale Terrace was built to house the miners of the Gribdale Mining Co. Ltd. This was one of three mines or quarries in the Great Ayton area extracting whinstone, an extensive tabular intrusion of hard igneous rock known as the Cleveland Dyke and used principally in road building. Whereas Langbaurgh and Cliff Rigg were predominately quarries, Gribdale operated by drift mining.

The road centre of the photo is an extension of Dikes Lane. On the 1856 O.S. map it is named as Howl Lane1Maps.nls.uk. (2021). View map: Yorkshire 29 (includes: Easby; Great Ayton; Ingleby Greenhow; Kildale; Little Ay… – Ordnance Survey Six-inch England and Wales, 1842-1952. [online] Available at: https://maps.nls.uk/view/102344245#zoom=6&lat=7505&lon=5584&layers=BT [Accessed 1 Nov. 2021].. It is actually built on top of the whinstone outcrop as evidenced by the growth of gorse or whin alongside, a plant which thrives on poor growing conditions with dry rocky soils, hence its alternative name. The Gribdale drift mine ran literally underneath this road. Its entrance was below the sharp bend before the lane drops down the Gribdale Terrace but is overgrown and difficult to see from the lane.

From the mine entrance, a narrow gauge tramway ran all the way down to sidings near the railway station, crossing the beck four times and including one switchback3Ibid.. If you know where to look there are still subtle remains of the earthworks associated with this tramway4The route is best visualised from the 1919 O.S. map (but note the mine here is indicated as ‘ironstone’). Available online at: https://maps.nls.uk/view/100941974#zoom=5&lat=3742&lon=5125&layers=BT [Accessed 1 Nov. 2021]..