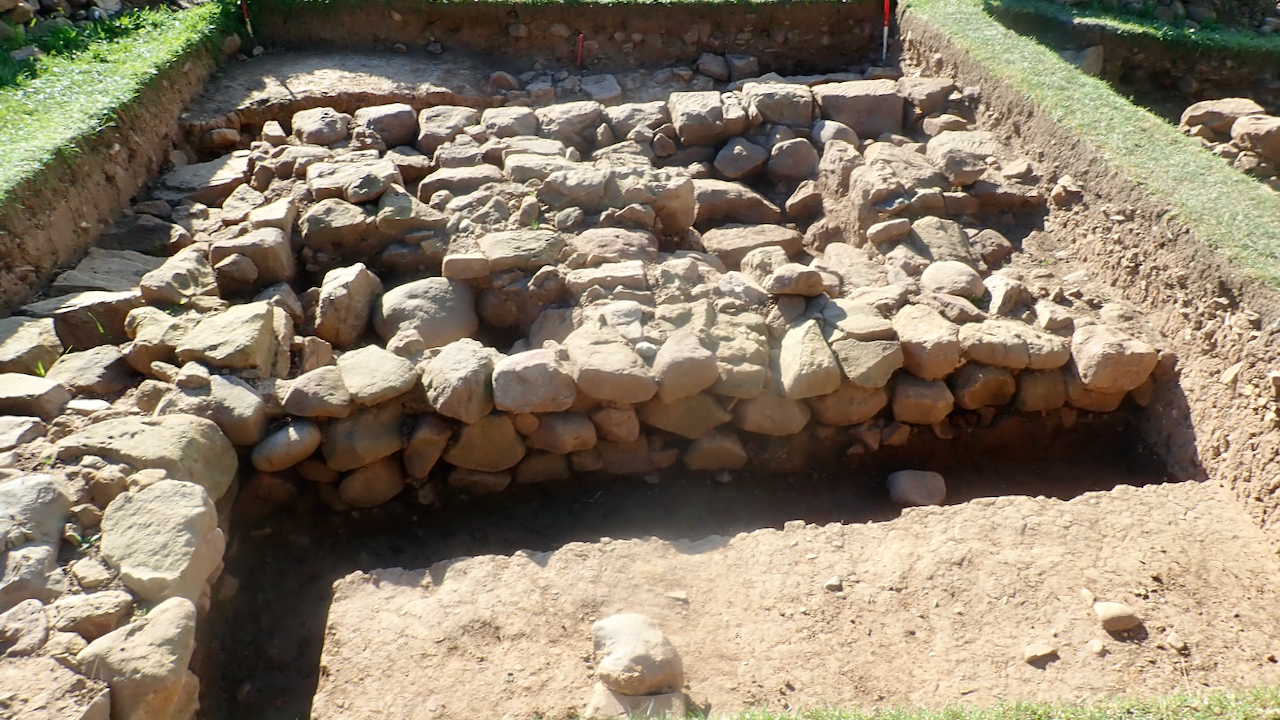 My penultimate day at the archaeological dig in Kildale which I have been involved with all summer. The site will soon be winterised until next year.

It is thought the stone walls are the remains of a medieval chapel dedicated to St. Hilda, which was located through detective work by members of the Hidden Valleys Community Project using a mixture of historical records, LIDAR and geophysics.

Sometime in the mid-13th-century, the Lord of the Manor of Kildale, Sir William de Percy,  gave the Chapel of St Hilda (and a certain amount of land) to the canons of St John the Evangelist at Healaugh Park Priory, an Augustinian priory. This implies there was a chapel already in existence. In return for this land, the canons would provide two priests to pray for the soul of Sir William and his family.

Sir William’s son, Sir Arnald de Percy, reduced this requirement from two priests to one, but some time later that century, or perhaps in the early 14th, the Prior of Healaugh, returned the chapel and land to Sir Arnold. Sir Arnold, obviously worried about his soul, then gave permission for another monastic order, the Crutched Friars, to use the chapel.

But it transpired that the brothers of the Crutched Friars did not have the permission of the Archbishop of York or the approval of the Pope, and that the parishioners of Kildale were attending the chapel instead of the church. Eventually, in 1314/15, the Archdeacon of Cleveland issued an interdiction forbidding the brothers from celebrating divine offices, and the Kildale chapel was an unconsecrated oratory.

The Crutched Friars were consequently forced to leave Kildale, after which the chapel disappeared from the historical records apart from a brief mention in the 16th century which referred to a ‘Saynt Yld’s Garth‘2British-history.ac.uk. (2021). Parishes: Kildale | British History Online. [online] Available at: https://www.british-history.ac.uk/vch/yorks/north/vol2/pp249-253#h3-0004 [Accessed 1 Sep. 2021]..

So it seems there have been three orders occupying St. Hilda’s chapel at various times. We do not know for sure if any incumbent rebuilt or altered the chapel, although there is one indication that the Crutched Friars began to build an oratory there in 13123St-andrews.ac.uk. (2021). Dugdale, William, Sir. Crutched Friars of Kildale, in Yorkshire in Dugdale’s Monasticon, Vol. 6 Part 3 Dugdale, William, Sir Vol. 5: 1587. | Monastic Matrix. [online] Search results at: https://arts.st-andrews.ac.uk/monasticmatrix/commentaria/dugdale-william-sir-crutched-friars-kildale-yorkshire-dugdales-monasticon-vol-6-part-3 [Accessed 22 Sep. 2021]. Available at: https://arts.st-andrews.ac.uk/monasticmatrix/sites/monasticmatrix.osu.edu/files/commentaria/primary_texts/mm-S11876-dugdalew-crutched-kildale.pdf. After abandonment in the 14th-century, it is likely the building would have been reoccupied domestically or as a cattle byre, before finally falling into disrepair. The building fabric would likely then to have been salvaged and used elsewhere (probably ending up in local farm buildings). Sometime later the field was subject to ridge and furrow ploughing.

I’ve located the pin in the centre of Kildale in today’s map extract.