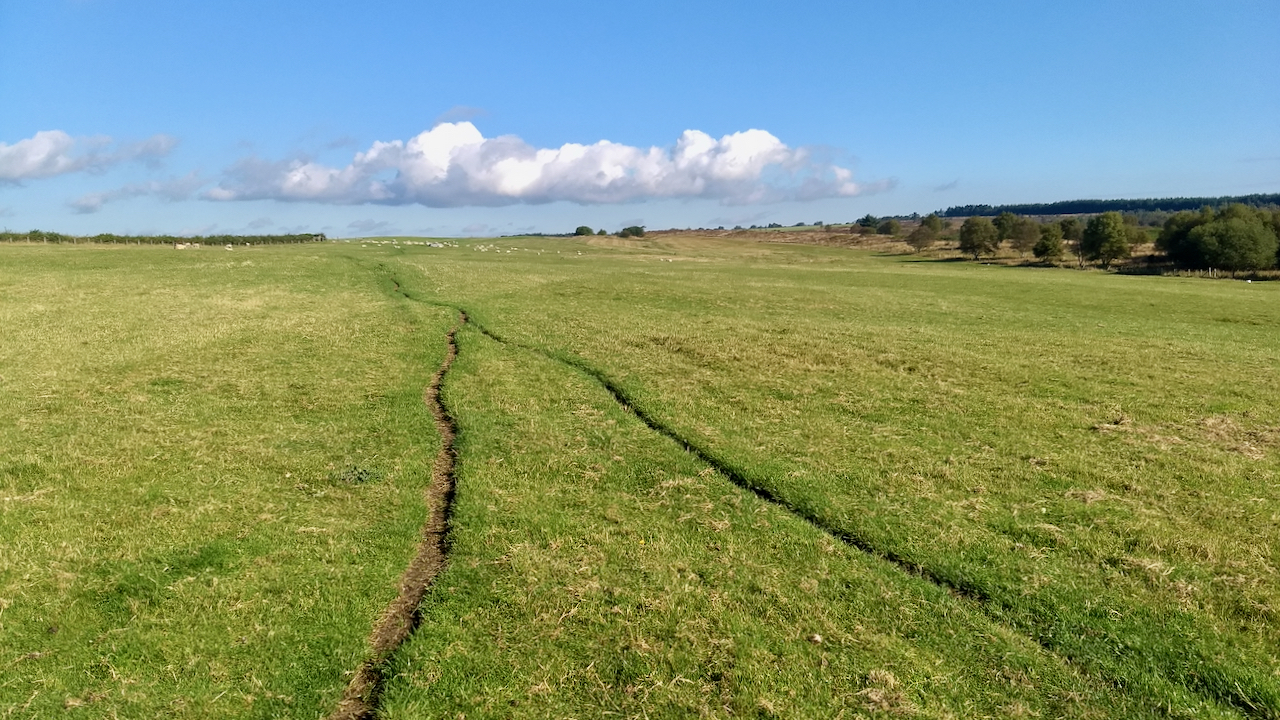 They say that sheep will blindly follow the sheep in front. It’s part of their gregarious instinct. Yet will they follow the exact same route day after day? For surely this sheep-trod has taken many weeks to develope.

And if they do, then they must have a terrific terrain memory. It be wrong to say the trod follows a straight route from a smeuse (hole in the fence) for half a kilometre across lush pasture. It does wiggle a bit. And here the trod divides for twenty metres or so before rejoining. On uneven moorland the sheep may well end up treading the same route to avoid a bog or boulder but on this field the sheep have not been tempted to deviate by luscious grass on either side.

In parts of Ireland and Cumbria, a sheep-track was called a ‘rodding‘ in the 19th-century. Elsewhere it may be a ‘run‘ or ‘rake‘1‌“The English Dialect Dictionary, Being the Complete Vocabulary of All Dialect Words Still in Use, or Known to Have Been in Use during the Last Two Hundred Years; Founded on the Publications of the English Dialect Society and on a Large Amount of Material Never before Printed”. In six volumes edited by Joseph Wright, 1898. Vol V R to S. Internet Archive, 2014, https://archive.org/details/englishdialectdi03wriguoft. Accessed 10 Apr. 2021..

The field is on a National Trust tenanted farm adjacent to Bridestones Moor, a Site of Special Scientific Interest. It was once open moorland until 1970 when it was converted to intensively managed farmland. This not only resulted in a loss of a natural environment, but nutrients leaching into the griffs or valleys of the nature reserve caused environmental damage. The catchment area is now not fertilised, ploughed, or stock-fed2BIOLOGICAL EVALUATION. NATIONAL TRUST • ESTATES DEPARTMENT. BRIDESTONES MOOR North Yorkshire. 1999 Survey Incorporating 1987 Survey..