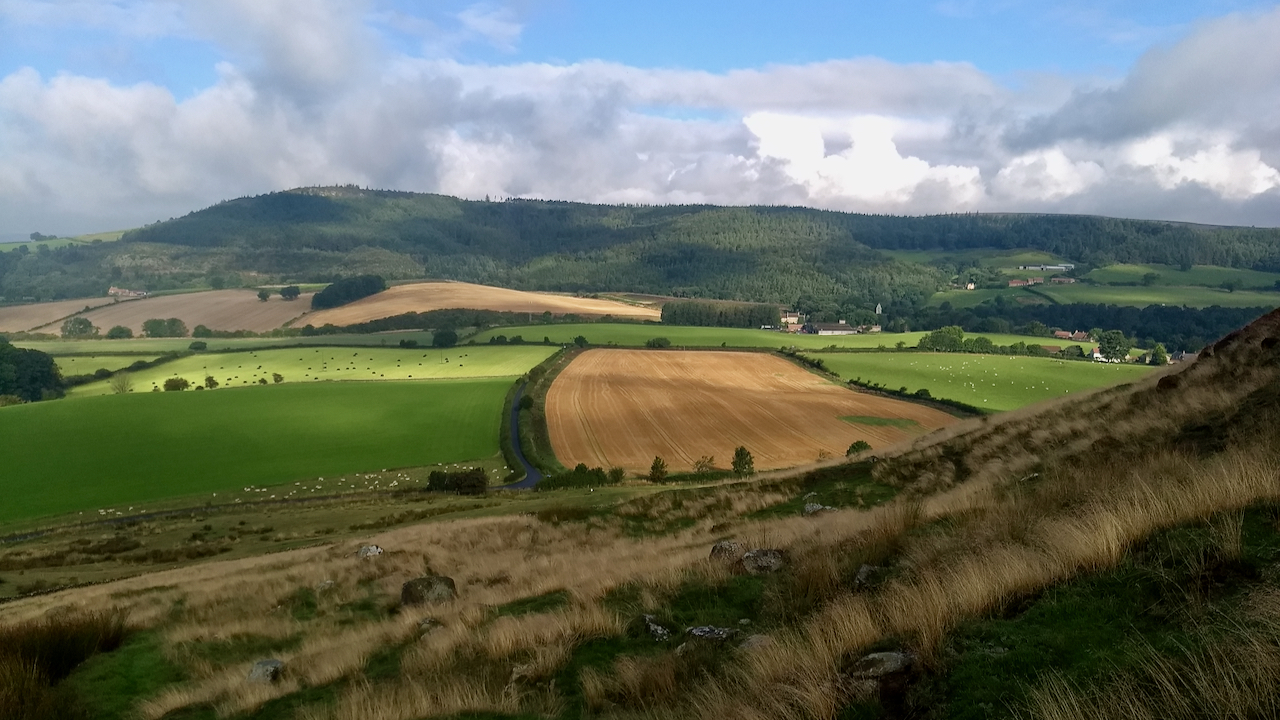 A view across Kildale from Park Nab to the densely forested Coate Moor. The highest point towards the left is actually Easby Moor with its monument to Capt. Cook but this story is about a Bronze Age barrow hidden amongst the trees on Coate Moor called Nanny Howe. It’s a story about a witch and a haunt of the devil.

A more formidable personage, however, than “demon-lover” formerly haunted the lofty heights of “Devil’s Court” (part of Court Moor), in Kildale. Tradition affirms, that in days of yore his Satanic majesty, with a sporting company of favourite imps, was accustomed, like the stout Percy of Northumberland,

“ His pleasure in the ‘Kildale’ woods
Three summer days to take.”

A worthy named Stephen Howe, incensed at his highness for poaching on his manor, had the effrontery to boast, on one occasion, that if he again caught him hunting without license, he would not only discharge him from his liberty, but chastise him for his insolence. Hearing of this, Satan, whose courage has never been impeached, seated in a magnificent car, drawn by six coal-black steeds, drove down boldly, at his next visit, to Stephen Howe’s small cot, on the brink of Court Moor. “Hah, hah!” shouted Lucifer; “I have found you at last!” Upon which poor Stephen took to his heels, being mightily afraid. Not so his wife, Nanny Howe, who being reputed a famous witch, did not fear even the devil himself, and boldly saluted him with her broom, which caused him to scratch his head with his claws. Soon rallying, with a powerful switch of his tail, he capsized poor Nanny, who was thus compelled to own the superior skill and agility of her antagonist. “Ah!” quoth the devil,“you have both grievously offended me; one of you at least must accompany me, — see, I have brought you a carriage and horses: say which of you will go.” “I,I,”said Nanny; and, shouldering her broom, leapt into the coach without waiting further invitation, and away they drove in gallant style. Midway up the hill the devil, who felt thirsty, alighted, and at one draught drank dry the church-well, which formerly supplied the holy water for baptism.

We were further informed, that, during the last century, a certain youth, who, like Tam O’Shanter, had been “gettin fou’ and unco happy,” in crossing the wild heaths and moorlands above Kildale, actually beheld Nanny riding on her broomstick over the “Devil’s Court.” The fright occasioned by this incident induced the youth to become ever afterwards a very zealous tee-totaller. Nanny Howe is still sometimes to be seen gaily frolicking through the air at the awful hour of midnight.