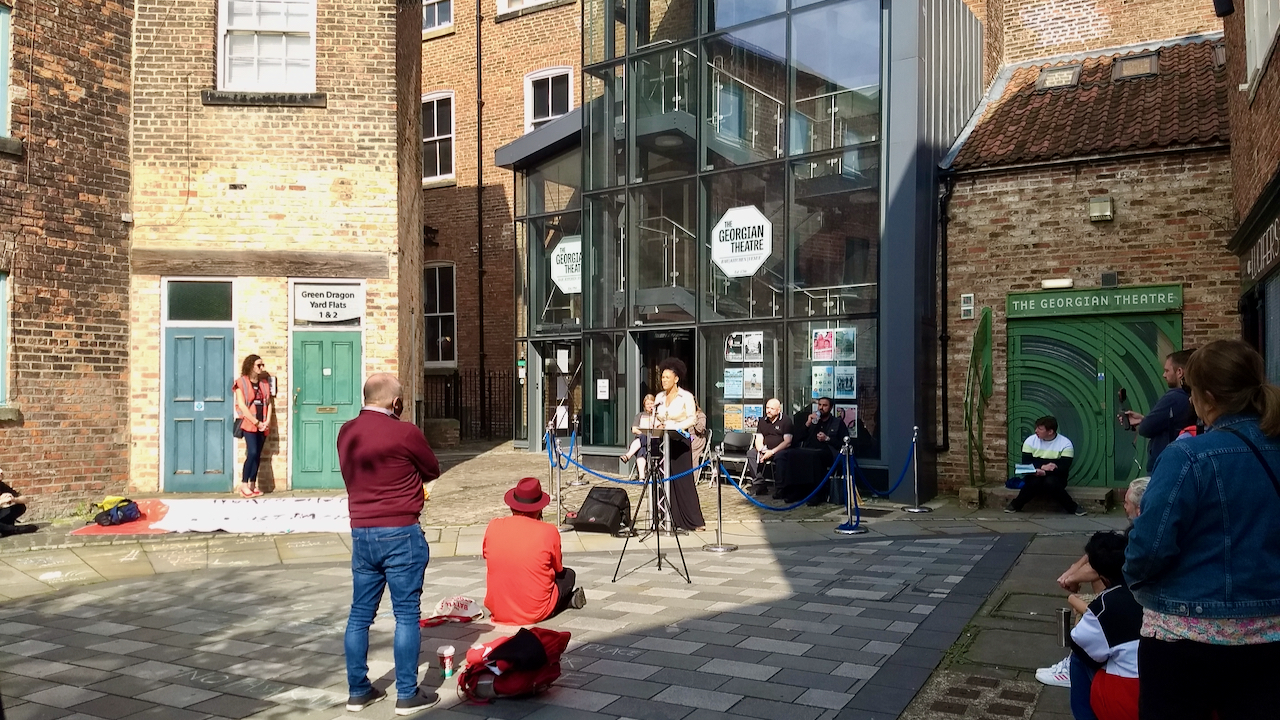 Headed down to Stockton-on-Tees today to attend the “Battle Of Stockton” commemoration. This is a somewhat largely forgotten episode from the annals of Teesside’s history when 2-300 fascists organised by the British Union of Fascists and arrived by bus from Tyneside, Manchester and Lancashire to march through along Stockton High Street. The protest was met by 2 – 3,000 Stocktonians, fighting inevitably began and the fascists were chased back across Thornaby bridge to their coaches under police protection.

This happened on the 10th September 1933, a time just after the depression of the 1920s which had left Stockton particularly hard hit. In 1932 every second man was out of work. A major engineering works, Blairs, had closed with the loss of 1600 jobs along with many other factories and shops. Activity in the shipyards on the riverside was in steep decline1Horton, Minnie C. “The Story of Cleveland”. Cleveland County Libraries. pp 112/3. 1979 ISBN 0 904784 09 6..

It was into this atmosphere that Oswald Mosley‘s ‘blackshirts’ hoped to stir up disunity and support. There was also suspicion that Stockton’s conservative MP at the time, Harold Macmillan, had some sympathy for Mosley’s promises of radical measures to reduce unemployment2Wikipedia Contributors (2021). Harold Macmillan. [online] Wikipedia. Available at: https://en.wikipedia.org/wiki/Harold_Macmillan#Member_of_Parliament_(1924%E2%80%931929) [Accessed 5 Sep. 2021]..

My daughter was one of the speakers at the event today. It was a proud moment for me. So for today’s feature image I’ve ignored my self imposed rule of not including people.

The Green Dragon Yard with its fine little Georgian Theatre is one of Stockton’s hidden gems. It was opened in 1766, and originally was a financial and cultural success with London actors appearing but by the middle of the 19th-century had degenerated into a music hall. After closure it was used by the Salvation army and then by a confectionary manufacturer. Fortunately in 1972 the Teesside Corporation placed a preservation order on the Green Dragon Yard and it was reopened as a community venue in 19803Horton, Minnie C. “The Story of Cleveland”. Cleveland County Libraries. pp 69/70. 1979 ISBN 0 904784 09 6.4Georgiantheatre.co.uk. (2021). About the Venue | The Georgian Theatre. [online] Available at: https://georgiantheatre.co.uk/about-venue [Accessed 5 Sep. 2021]..