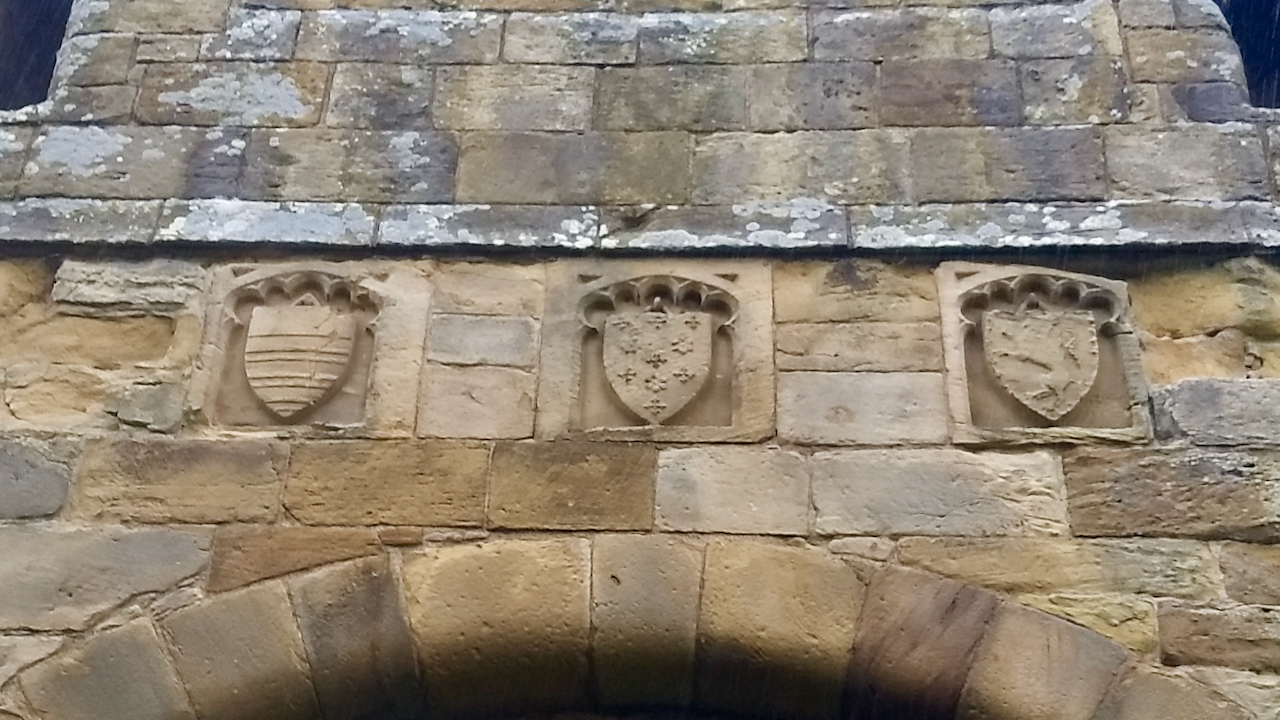 Another dreich morning so I thought I had better grab a few shots of Whorlton Castle before I trudged up Whorlton Lane into the cloud.

I’ve covered this impressive ruin several times before. What we see today is just the gatehouse of a once magnificence castle, of the motte and bailey type, but which was already a ruin when this gatehouse was built.

Carved in the stonework, over the gateway are three shields which were described by John Walker Ord1Ord, John Walker. “The History and Antiquities of Cleveland”. London: Simpkin and Marshall. 1846. as (L-R):

Perhaps some explanation is needed.

Robert de Meinell was given the land by Henry I and it is thought the original castle was probably built by one of his heirs during the reign of Richard II2Wikipedia Contributors (2021). Whorlton Castle. [online] Wikipedia. Available at: https://en.wikipedia.org/wiki/Whorlton_Castle#History [Accessed 22 Aug. 2021].. In the mid-14th century, it passed by marriage to the Darcy family, and later in that century Philip Darcy married Elizabeth Grey3Wikipedia Contributors (2021). Baron Darcy de Knayth. [online] Wikipedia. Available at: https://en.wikipedia.org/wiki/Baron_Darcy_de_Knayth [Accessed 22 Aug. 2021].. So that takes care of the three families involved. Which also somewhat dates the gatehouse.

The heraldic terms are very precise and took a bit of googling.

A ‘bar‘ is a horizontal band across the shield and a ‘bar gemel‘ is a pair of narrow bars.

A ‘chief‘ is the band running horizontally across the top edge of the shield (typically the top fourth or third).

A ‘semi‘ refers to the layout of the symbols, which are, in this case, ‘crosslets‘ [a small cross usually with crossed arms] and ‘cinquefoils‘ [an abstract form of the five petalled flower]. But do I count six petals?

‘Gules‘ is the colour red.

‘Engrailed‘ describes the border of arcs that point outward.

A ‘lion‘ is obvious and ‘rampant‘ means its rearing up.