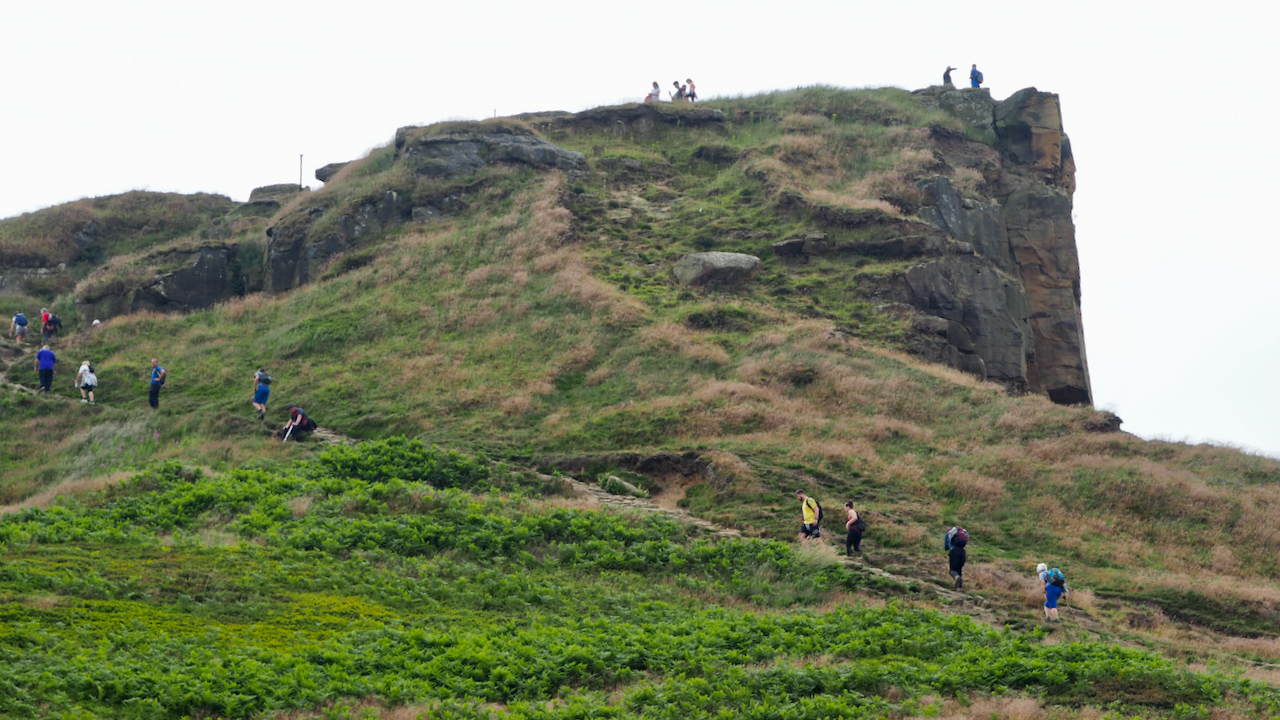 The National Trust acquired the main western slope of Roseberry Topping in 1984 and, by July 1995, had spent £500k on improvements with another £500k planned over the next four years. Much of this money was spent on footpath improvement which had been somewhat neglected when in private ownership.

With folks climbing Roseberry increasing year on year, the pressure on footpaths has increased.

In 1993, a new path was laid using 200 tonnes of sandstone airlifted by helicopter1“Roseberry Topping”. Great Ayton Community Archaeology Project. 2006 ISBN 978-0-9554153-0-2. Today, that path looks inadequately narrow and is particularly avoided on the descent resulting in severe erosion on either side.

In 1999, new paths were laid up the south side from the folly and east side from the col, again using airlifted stone and soil2“Ayton Happenings”. A booklet edited by Malcolm Race and produced for the Millennium in aid of Parish Church Funds.. This south path is also showing signs of deterioration.

In Spring 2019, the Trust resurfaced a mile of muddy path along the bottom of Newton Wood. This was to be the first phrase of a long term project and was, surprisingly still funded by the EU, The European Agricultural Fund for Rural Development3National Trust. (2019). We’ve been working to minimise the mud on some of Roseberry’s well-used routes. [online] Available at: https://www.nationaltrust.org.uk/roseberry-topping/features/improving-paths-at-roseberry-topping [Accessed 25 Jul. 2021].. But then Covid hit, Trust income took a dive and of course EU funding has finally dried up.

Attention is now on the highly eroded main path up Roseberry. Something needs to be done. It’ll be a mammoth job; expensive and far too big for one day a week volunteers.

So today, I am using this blog to publicise the Trust’s campaign. I know times are hard but if you have enjoyed the delights of Odin’s hill sometime over these last two years, please consider contributing a fiver.