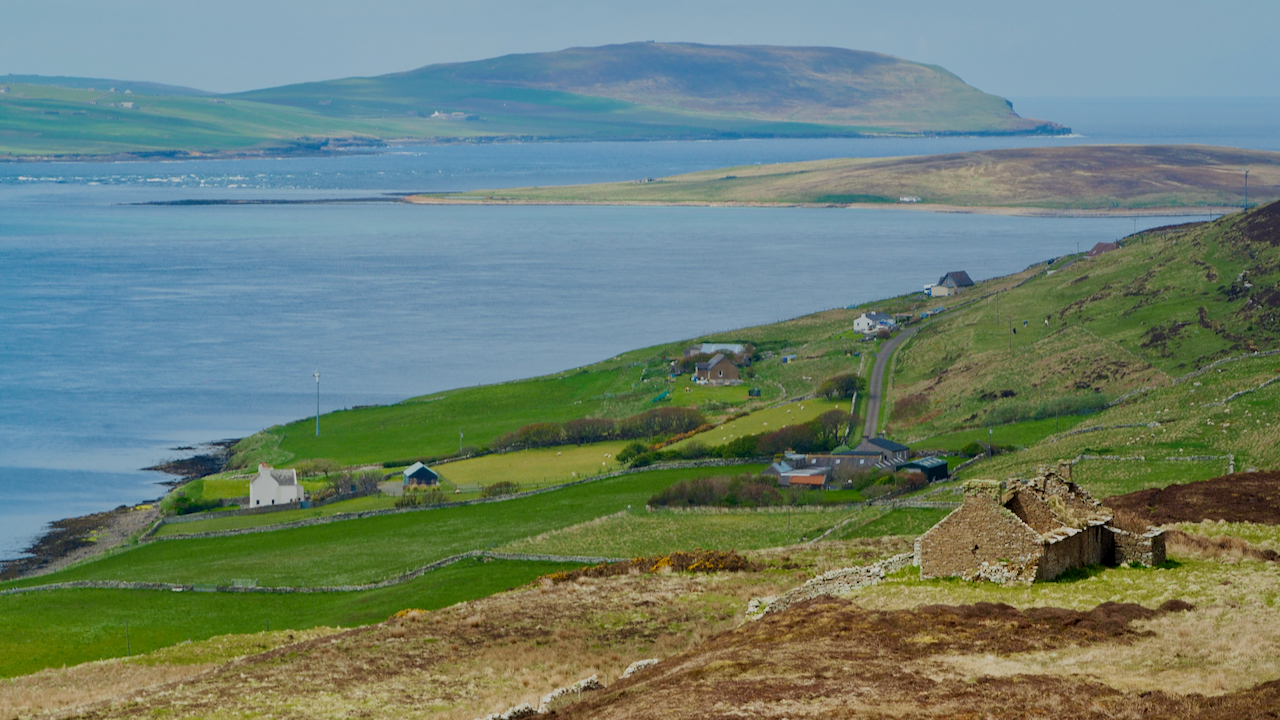 A view of Eynhallow Sound from Knowe of Yarso on the island of Rousay. Midway is the southern tip of Eynhallow and in the distance is Costa Hill with the grand height of 151 metres.

Sited on a glacial shelf, the Knowe of Yarso is a chambered cairn about 5,000 years old which was found to contain at least 29 interments including a row of 15 skulls as well as the bones of red deer, sheep and a dog, and Bronze Age pottery.  There is not much to actually see from the outside, but like all other chambered cairns, access to the inside is still closed due to the Covid restrictions. A padlocked door bars access. This is in spite of cafés now being open and the cairn’s location off the beaten track on a windswept island.

Eynhallow is a small island which was cleared in 1851 when it was discovered that one of the houses was a reused church, part of a 12th-century monastery.

Orkney emerged relatively unscathed from the 18th/19th-century clearances of mainland Scotland and Outer Hebrides. Rousay and Eynhallow were exceptions. Lieutenant General Traill-Borroughs, continued the clearances began by his predecessor George William Traill by building a wall forcing the Rousay crofters on to a narrow coastal strip. This caused so much distress and anger that a gunboat had to be employed to restore order. Today the Jacobean pile that Traill-Borroughs built for himself stands foreboding and apparently unoccupied1“The Rough Guide to Scottish Highlands & Islands”. ISBN 1-84353-269-7. 3rd Edition 2004..

I did not realise it at the time but the photo shows the standing waves between Eynhallow and the Mainland which occur at a particular state of the tide. This is so distinctive I feel it must have a local name. Yesterday when in Stromness, I did spot an admiralty chart decorating a tea tray in a shop window which clearly showed a ridge of shallows across the sound at this point.

4 Replies to “Eynhallow Sound from Rousay”