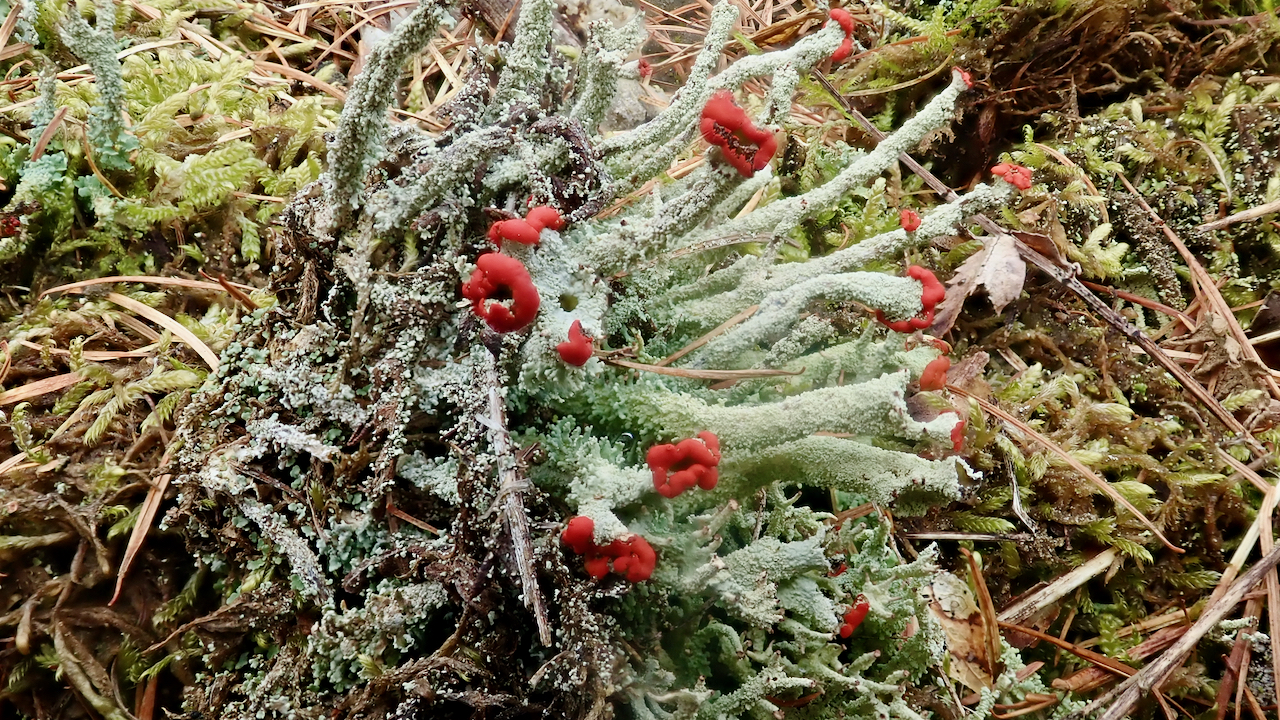 One of the lesser known residents of Great Ayton was William Mudd (1829–1879) who the head gardener for Thomas Richardson, a retired banker and one of the village’s most influential and generous benefactors. Mudd came under the influence of George Dixon, a fellow Quaker and superintendent of the North of England Agricultural School, the predecessor of the Quaker School, who instructed Mudd in microscopy. Soon Mudd became an acknowledged expert in lichens, publishing  in 1861 ‘A Manual of British Lichens’, the first comprehensive book of the flora. In 1864, Mudd left Great Ayton to become the curator of the Cambridge Botanic Garden1“Mudd, William (1829–1879), Lichenologist.” Oxford Dictionary of National Biography, 2021, www.oxforddnb.com/view/10.1093/ref:odnb/9780198614128.001.0001/odnb-9780198614128-e-72413;jsessionid=56087B03F32051679877949D16CFE1AF. Accessed 6 Mar. 2021..

As an lichenologist therefore Mudd would have easily identified this lichen I discovered on a mossy boulder in a clearing on Coate Moor. With its scarlet red podetia I have always known it as the Devil’s Matchsticks but I think its scientific name is Cladonia floerkeana although there are several other possibilities.

You need to be of a certain age to remember the red tipped striking matches to which the lichen’s common name refers. The duller brown safety matches have taken over now.

The friction match was invented in 1826 by John Walker, a chemist from Stockton-on-Tees. Walker sold his matches as “Congreves” but did not patent the design. He used sulfur in his matches but eventually the main ingredient in matches became white phosphorous. This was found to cause bone disorders such as ‘phossy jaw‘ to develop in those involved in the manufacturing process, mostly young girls, which led to the London matchgirls strike of 18882‌Wikipedia Contributors. “Match.” Wikipedia, Wikimedia Foundation, 20 Feb. 2021, en.wikipedia.org/wiki/Match#Friction_matches. Accessed 6 Mar. 2021..

In the manufacture of matches much trouble has been occasioned by the use of phosphorous …. In some of the small and poorly-managed factories the men and children are never free from the fumes; their clothes and breath are luminous in the dark, and in the daytime white fumes may be seen escaping from them whenever they are seated by the fire. … The danger arising from the use of matches was magnified, because they could sometimes be seen in the dark, were liable to ignite on a warm shelf, and were poisonous to such an extent that children had been killed by using them as playthings. [John A. Garver, “Matches,” in The Popular Science Monthly, August 1877]3“Match | Origin and Meaning of Match by Online Etymology Dictionary.” Etymonline.com, 2021, www.etymonline.com/word/match#etymonline_v_9704. Accessed 6 Mar. 2021.

A rival to Walker’s “Congreves” was a match called “Lucifers“. This became a slang term for the match and immortalised in the WW1 song “Pack up your troubles in your old kit-bag“4‌Wikipedia Contributors. “Match.” Wikipedia, Wikimedia Foundation, 20 Feb. 2021, en.wikipedia.org/wiki/Match#Friction_matches. Accessed 6 Mar. 2021.:

Pack up your troubles in your old kit-bag
And smile, smile, smile,
While you’ve a lucifer to light your fag,
Smile, boys, that’s the style.