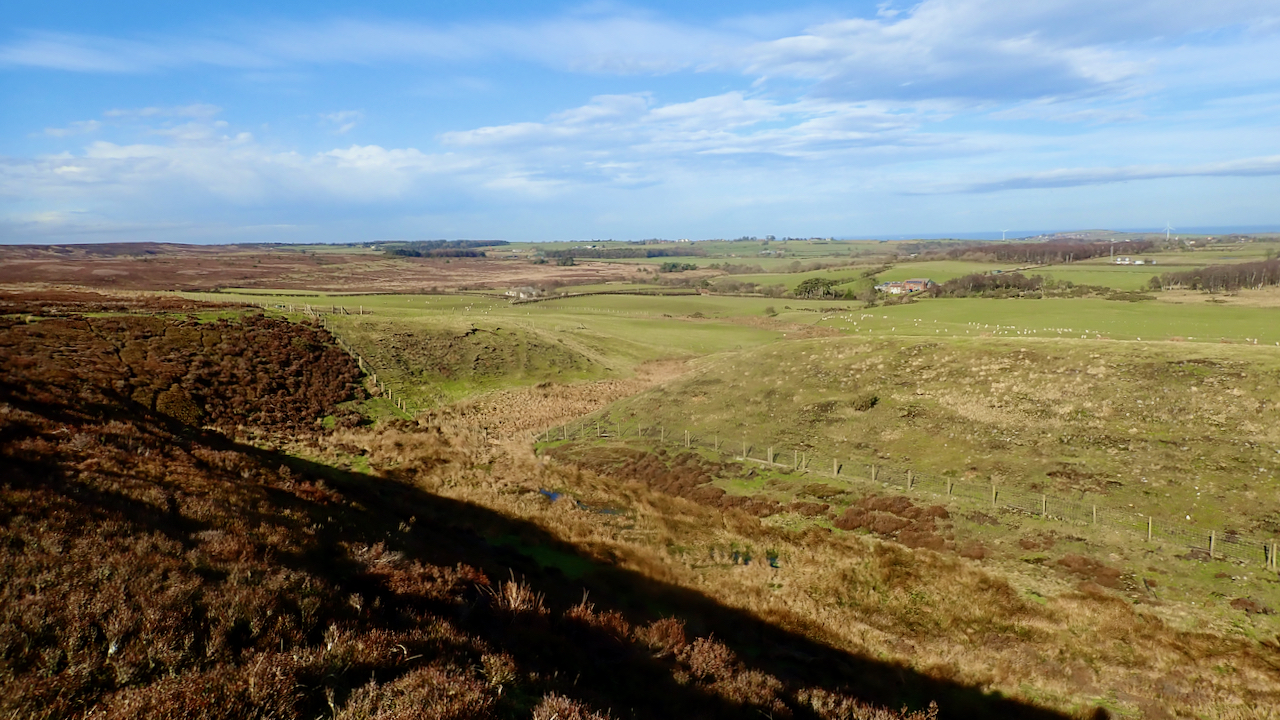 Note to self: do your research before going out and about.

Heading over to Moorsholm High Moor, I had intended to take a look at a round barrow dug by Canon Atkinson in the 19th-century in which he found stones of whinstone, the volcanic rock which the nearest outcrop is 3½ miles away. I guessed it would be amongst a cluster of tumuli marked on the map to north west of the Dimmingdale Farm.

But the cluster turned out to be a prehistoric cairnfield, subtle circles of grass within the heather. Not Atkinson’s barrow, which I found out later that was actually to the east of the farm.

But there was a fine view of Freebrough Hill with it’s tale of King Arthur and his Knights but I’ve already posted about them.

What I did find interesting was a small re-entrant, Spring Head Hole, bounded by a knoll, Stony Ruck and with a spring, Moorsholm Spring. The main photo is from the same viewpoint but viewed NNW. In hindsight, I could have tried using the panorama feature on the camera but that’s never been successful.

Frank Elgee has a lot to say about this little dry valley as it provides a clue about how Freebrough Hill was formed during the last ice age and why there are not more similar outlier hills.

I am standing on the edge of a scarp of a calcareous sandstone known as the Osgodby or Kellaways Formation. The rock that Freebrough is capped with.

The bedrock at bottom of Spring Head Hole is the Cornbrash Formation, an interbedded limestone and mudstone layer, relatively thin, about one contour interval, and below that is the sandstones, siltstones and mudstones of the Scalby Formation. This Victoria sponge of rock is replicated on Freebrough Hill.

However, there is a fault between Freebrough and where I’m standing, roughly on line with the bottom of the scarp. A slice in the cake; my bit has dropped. So before the last ice age I would have been a facing a scarp not overlooking one.

Any fault is always a line of weakness along which glacial action and water erosion works. As the great ice-sheet swept down the North Sea, flowing over the scarp and Freebrough, it impounded the waters of Lockwood Beck and Haredale, causing them to flow along its edge and the scarp of the fault creating the dry valley of Spring Head Hole. But in time, the scarp of the fault gradually eroded back to where Freeborough now stands, and all the time the ice stilled flowed over it. To the south of the hill the scarp was eroded away completely leaving Freebrough alone as an outlier as we know it today.

I feel a little of of my depth writing this, so I better qualify it with an abbreviation from a previous life, E. & O. E.