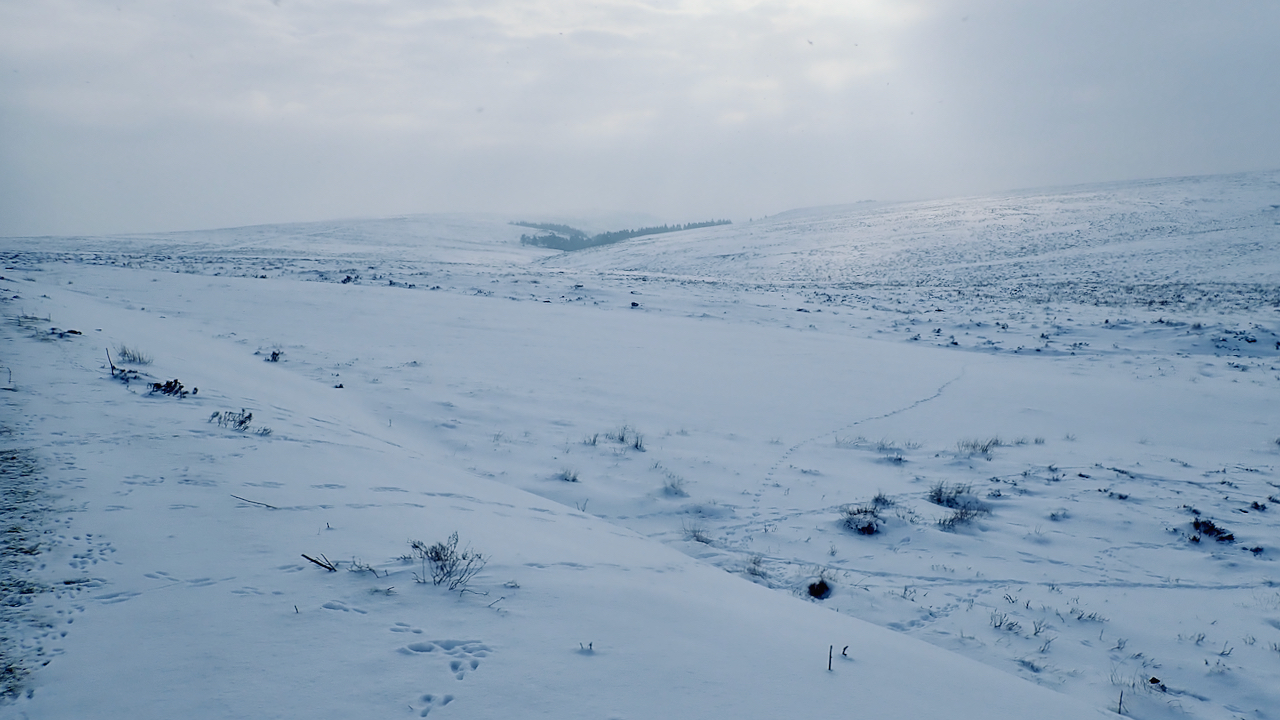 Seduced by the cracking weather over the last few days, I dug out the vintage cross country skis from the loft and headed over to Bloworth Crossing. Blue skies at first but by the time I got to the old mineral railway it had closed in with snow flurries in the air. A tempting hint of thinner cloud over Bransdale but that would have been a shade too far.

I was reminded of an earlier time I passed this way on skis, an unsuccessful attempt at a crossing of the Lyke Wake Walk in the late ’80s. An early start and good progress made to Rosedale Head and then the temperature rose. Our intrepid party managed Jugger Howe Beck before the thaw defeated us.

Bill Cowley in his book of the walk (my tattered copy is the 1967 edition price 7s 6d) laments at the tearing out of a large fire break over Urra Moor during the winter of 1960/61. This will be the current motorway used by the Lyke Wake Walk, the Coast to Coast and the Cleveland Way. Apparently sections of the paved medieval trod that more or less follows the route were torn up in the process. Some sections were restored but I fear these are now buried in the heather.

“The Yorkshire moorland fire which has ravaged 3,000 acres and at times touched a line nearly ten miles long—from Bilsdale to Westerdale —was still burning last night. Troops were rushed from Catterick to the Bilsdale and Bramsdale [sic] moors yesterday, after over a hundred men, including relays of unemployed, had fought the fire throughout the night. The soldiers dug a four-feet deep trench in the path of the flames. The town of Helmsley, ten miles away from the blaze, was full of acrid smoke. A dalesman said yesterday that the peat was smouldering to a depth of three feet, and it would need the winter snows thoroughly to extinguish it. The fire is in an almost inaccessible part, and miles from any road or habitation.

Mr H. J. Garbutt, of Bilsdale, said that the fire would be a serious thing for the farmers. A lot of sheep feeding land had been destroyed, and it would take ten years for it to be brought into use again. Heavy rain yesterday helped the fire-fighters a little. ” Many had had no sleep for 18 hours. People taking food to them had to walk over miles of rough moorland. Sheep and grouse have been roasted alive, and many beaters have been temporarily overcome by smoke. Last night there was still danger of the flames spreading to the East Coast.”

The quickest way off the moors from here is down the incline. That would be a black run on skis. I took mine off and walked down. And then the sun came out.