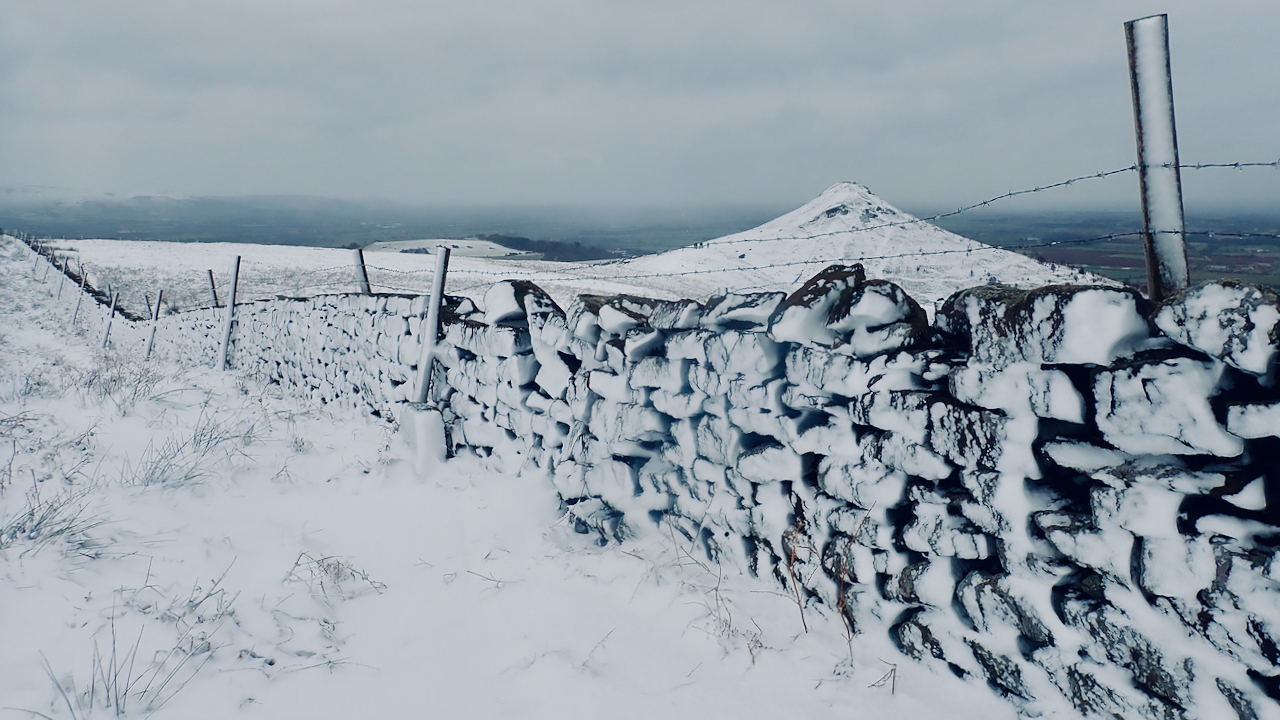 I just love the two tone look of a dry stone wall splattered with snow. This is on the edge of Pinchinthorpe Moor. In the background is of course Roseberry Topping.

Roseberry Topping was at one time mooted for a monument to Captain James Cook. A monument had been discussed for forty years but, in the end of course, one was built on Easby Moor. Why?

The answer is simple, Robert Campion, Lord of the Manor of Easby and a Whitby banker, put up the money and as owner of the land, in those days, he could do what he liked. There was no planning regulations to overcome.

Then, in 1947, the post war government of Clement Atlee introduced the Town and Countryside Planning Act, and “planning” as we know it today began. It may be the bane of your plans to build that extension on your house but it gave us the countryside we know it today, without it, our countryside, towns and villages would look very different.

The Act introduced democracy into the planning process. It gave us, as individuals, a say in how we want our environment to look and feel. OK, the Act is showing its age, it’s become outdated requiring a lot of tweaks over time. A degree in law is needed to understand the language and procedures, but the underlying principles of the Act remain as relevant now as they did in 1947. If we, as a community, have no control how land is used, if we don’t have a say in  what gets built and where, then monstrosities will happen.

In August 2020, the Government published a White Paper proposing to deregulate the planning system. That White Paper has been simmering in the background behind the headlines in this winter of dissatisfaction: Covid lockdown nos. 2 and 3, the schools fiasco, vaccinations, Brexit, Trump, etc., etc.

By deregulation, the Government are proposing to essentially remove the rules that are at the very core of our planning system. Rules, that give us, our local communities, the power to shape what gets built and where. One central aspect that the proposals would do is to divide the land into three zones, a “protected” zone, a “renewal” zone, and a “growth” zone. And essentially, within the growth and renewal zones, which would make up the majority, you will no longer have that power, you wouldn’t have any influence in what gets built. One morning you could wake up to find bulldozers at the end of your road. Ok, I’m guilty of a little bit of hyperbole there.

Robert Jenrick in his forward to the White Paper writes that the proposals “will reform the planning system to … make it more efficient, effective and equitable“. Why am I sceptical of the veracity of these words?

Now, I don’t pretend to have fully read or understand the whole of the White Paper. Others better able than me, professionals, each with a lifetime of expertise in the planning processes, have done that and they are very worried about the proposed changes, to put it mildly. The Town and Country Planning Association, the Council for the Preservation of Rural England, Friends of the Earth have all expressed concerns.

Me, I’d rather put my trust into these professionals.

So, at the end of the day, do we want a planning system that is democratic, where we have a say, or a system where private interests can dictate about how our community works?