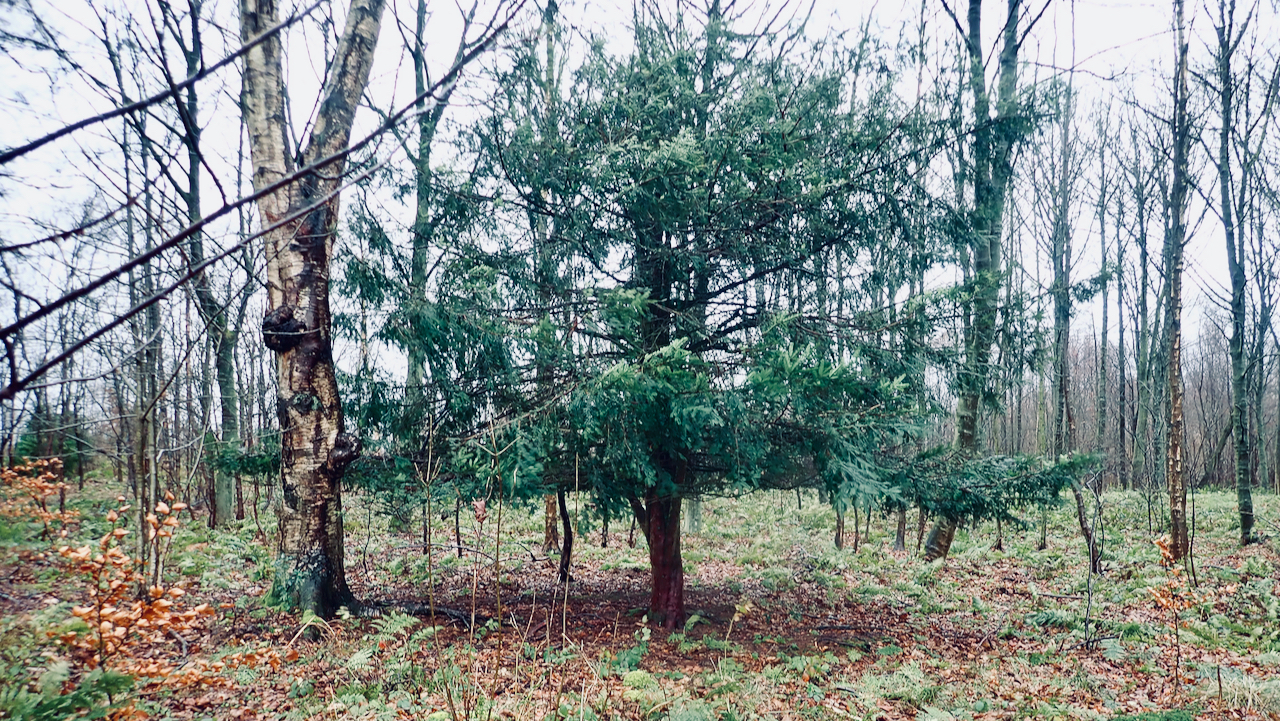 So the sketch in Monty Python’s Flying Circus might have progressed had it gone on past No. 1 – The Larch.

Wet and wild today so hugged the forest. I came across this yew tree with a distinct browsing line. This surprised me. I thought the needles were toxic but it turns out deer can tolerate it, unlike livestock.

This tree must be younger than the age of the plantation. So that would put it at no more than about fifty years old, a mere sapling compared to the oldest yew in the UK, that in Fortingall in Perthshire, which has been estimated to be up to 9,000 years old.

Yews are one of only three “native” conifers in the UK (alongside Juniper and Scot’s Pine) and usually found in churchyards where they could be older than the church itself. No one is sure whether yews were planted inside churchyards or churches were built near already established yews.

In the great storm of 1990, a yew tree in St. Mary’s churchyard in Selbourne, Hampshire toppled over. Underneath its rootstock, thirty graves were disturbed, the oldest being dated by pottery shards in the grave fill to around 1200 AD. The archaeologists reckon this individual was buried next to the tree when it already had a girth of 10 feet. There were no burials closer to the ‘centre’ of the tree. Unfortunately, in spite of being winched back into position and given lots of TLC, the tree failed to survive. However, a cutting had been taken whilst the tree was alive which has taken, so the tree does live on in a way.

Everybody thinks the yew was the wood used for the English longbow, but actually, our native yew was considered too brittle. The wood of the Spanish yew was better. In the reign of Queen Mary, the following prices were settled by her parliament: for a bow-stave made of the best foreign yew, six shillings and eightpence; for an inferior sort, three shillings and fourpence; and for one made of English yew, two shillings.

Dialect names for the yew are not very exciting: elk, ife, shoter, vewe/vew/ewe. The Northern term ‘wire-thorn‘ is interesting though, apparently, it refers to the texture of the wood when buried under peat.

And finally, as it’s that time of the year here is a verse from a Victorian Carol, only one verse as it’s a ‘short’ Christmas:

The cock sat up in the yew tree,
The hen came chuckling by,
I wish you a merry Christmas
And a good fat pig in the sky.