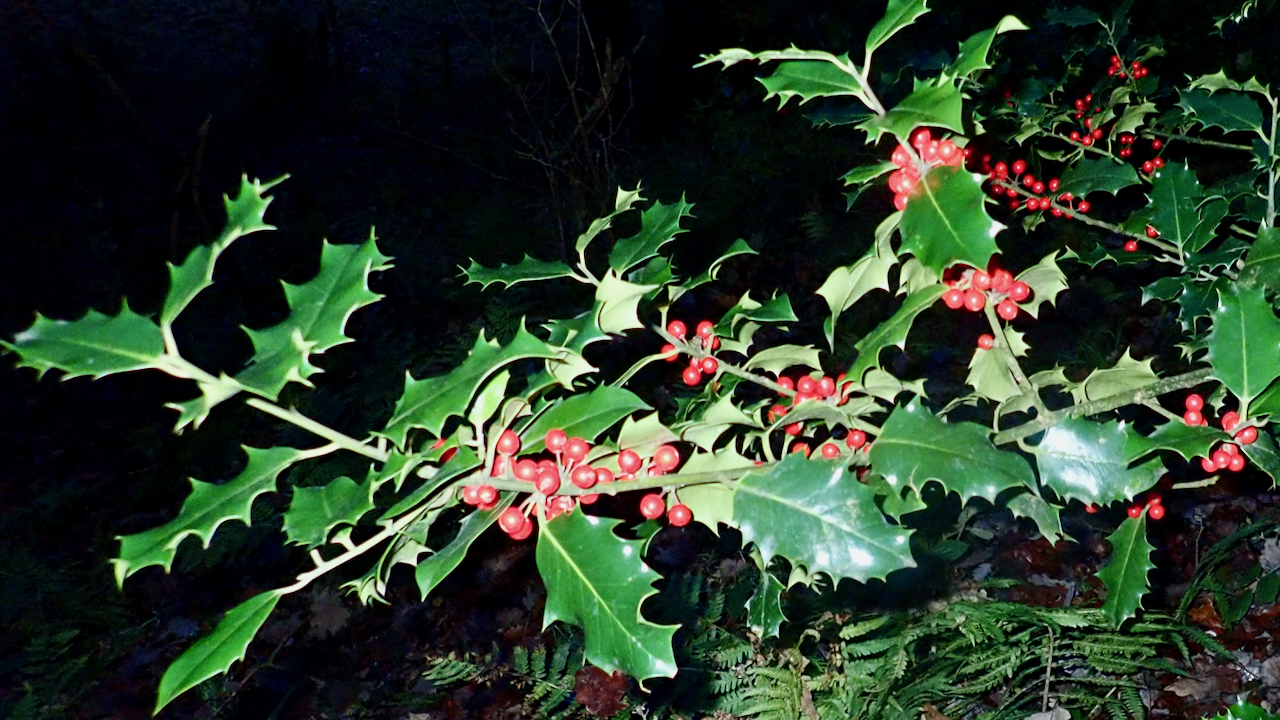 Need I go on? You must be so familiar with the Christmas carol. Holly, traditionally a masculine plant compared with the feminine ivy, although holly is what is called dioecious, meaning that individual trees are either male or female. Flowers occur on both male and female trees but only the female trees have berries and then only when the tree is about 20 years old.

Another idiosyncrasy of the holly is that above the browsing height, its leaves are prickle-less. This is referred to as ‘free’ or ‘slike’ holly and is more valuable as a Christmas decoration, people apparently will pay more for the prickle-less holly.

Throughout the ages, it has been considered bad luck to cut down a whole holly tree although it was pollarded for winter fodder (presumably only the slike branches). This might explain a Cornish folklore name ‘Aunt Mary’s Tree’, a reference to the Virgin Mary. This fear of ill-fortune is obviously overlooked when it comes to lopping branches to decorate our halls.

Because of the holly’s distinctive look, it’s a tree that can easily be recognised from a distance and was often used as a marker tree, deliberated planted to delineate routes or boundaries. Trees in hedges were often left to grow tall as a marker for the ploughman (and to deter witches from running along the top of the hedge – a habit of witches so they say).

And finally, the origin of the name, one of my pet interests, It derives from Old English, ‘holegn‘, from which we also get ‘hollin’ or ‘hollen’, both dialect names. Chaucer refers to the tree as ‘hulfere’ or ‘hulver’. Other regional names for the holly are ‘crocodile’, ‘hedgehog-holly’, ‘culver’ and ‘killin’.

In the North-East, the name suffix ‘holm’, such as in Saltholme or Moorsholm, is sure to come from the Old Scandinavian word ‘holmr‘ meaning ‘flat ground of the water meadow’. But if you see it in a place name in southern England particularly around the New Forest, then that has an entirely different root. It’s from the Middle English ‘holm‘ meaning a thicket of holly.