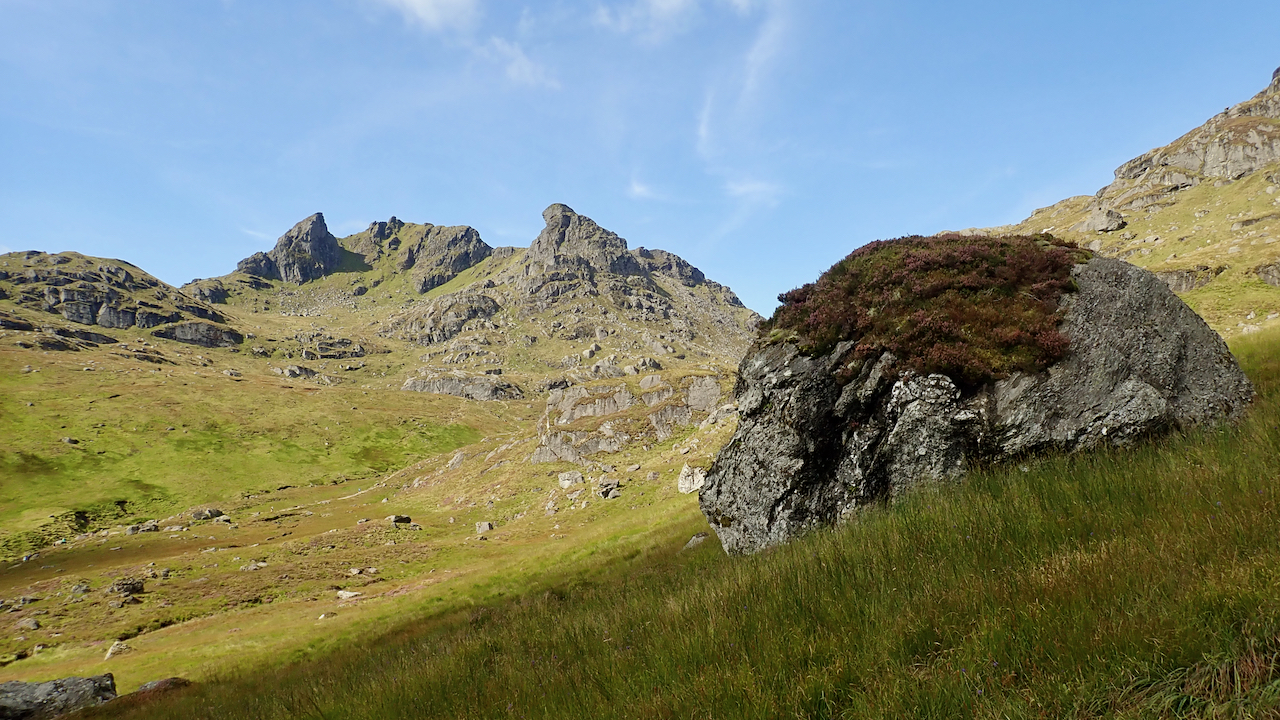 At 884m high, Ben Arthur, familiarly known as The Cobbler, is only a Corbett but is a cracking hill. It is one of a group of hills known as the Arrochar Alps: The Cobbler, and the Munros Beinn Narnaim and Beinn Ime. I believe technically The Cobbler refers to the central peak and Ben Arthur is the name of the mountain as a whole but that distinction is now largely forgotten.

Forgotten too, is the name ‘Suy Arthire‘ which the 16th-century map maker, Timothy Pont, gave the hill. ‘Suy‘ or ‘Suidhe‘ is a generic Gaelic hill name like ‘Beinn‘ or ‘Ben‘. It means a seat or level shelf on a hill-side. ‘Arthire‘ is of course ‘Arthur’. The name of the legendary British King as a hill name is not unknown in Scotland. Arthur’s Seat in Edinburgh is the best-known example.

I had intended to climb The Cobbler but had to settle for just Beinn Narnaim. My mind thinks I’m twenty years younger than my legs tell me. This photo was taken on the descent of Beinn Narnaim. Saw the boulder and liked it, as Shrek said to Donkey “that is a nice boulder”.

I have climbed The Cobbler before so not too disappointed. It was way back in ’88, the day after taking part in the Arrochar Alps Hill Race which took in Ben Vane as well as Beinn Ime and Beinn Narnaim. In 2007, the race was resurrected after a break of 15 years but obviously it hasn’t been held this year.

The Arrochar Alps has been likened to Yorkshire’s Three Peaks as a long hill challenge but there is another similarity: the crowds. The Cobbler has been said to be Scotland’s most popular hill and today there was a steady stream making the climb.
 Open Space Web-Map builder Code