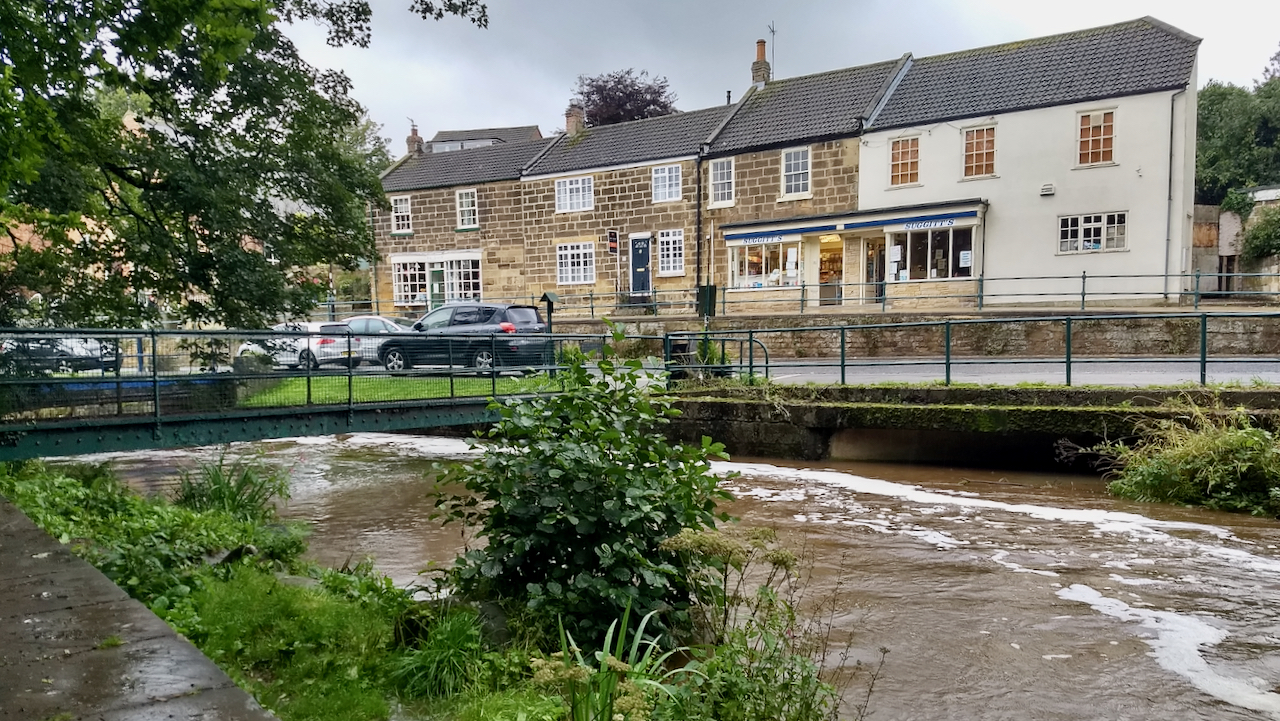 A day for keeping local.

With a flood alert issued for Stokesley last night, I had expected the river to be a little higher. Upstream the level had at least another 15 inches to rise before it would start to flow into the flood overflow bunds.

The river has claimed many lives. A boy and girl were drowned In 1925. The next decade saw an 8-year-old boy fall in but his father and the village postman who tried to rescue him, were both drowned. The boy survived, being washed downstream until he managed to cling to the bank. Only last year, in December, a local man drowned just a few metres downstream.

This must always have been a particularly muddy section of the village, often subject to flooding. The raised causeway in front of Suggits was constructed in the 1770s. Its commencement was recorded by the diarist, Ralph Jackson.

But it wasn’t just the threat of the river that made this spot the most notorious in the village. It’s at the confluence of the Skitterbeck with the River Leven; you can just see beck emerging below the railings on the right from its culvert under Park Lane.

The rapidly expanding California area, built to provide housing for the ironstone mining and whinstone quarrying industries often resulted in Skitterbeck being polluted with raw sewage. An outside earth closet was the standard provision for these low-cost terraced houses. A one-holer or thunderbox. These would have been emptied during the night and the soil carted off to a tip where it would be dried out to be used eventually as a fertilizer. In the 1851 census, One of my ancestors, my great-great-grandfather I think, was recorded as a night soil labourer in Nottingham. And his son was too; a family business. Wonderful. Anyway, I digress.

It was normal for wastewater to be emptied straight into the drains which flowed directly into Skitterbeck and hence into the River Leven at this junction. However, not infrequently, perhaps the night soil had not been collected for a few days, raw sewage would end up in the beck. To make matters worse, the Leven’s flow was reduced because some water was being diverted upstream down a race to the mill at the bottom end of the village. This was exacerbated during the summer when the flow was already at its lowest. A description of the stench at this stretch of the river is beyond imagination. The century had almost turned by the time work on a drainage scheme for the village had begun.